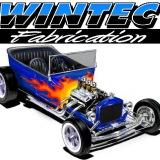 Our initial post about the Wintec Roadster attracted a lot of attention from T-Bucket fans looking for more room. Our recent “Shop Stop” at Wintec Fabrication fanned the flames even more. People wanted to know more about how this stretched, not quite a Tub, T-Bucket came about. So, here goes. The name Brian McAllister may be familiar to you because he was also a long-time Total Performance employee, along with Jim Wilkos before Total was purchased by Speedway Motors. You may have also seen Brian’s yellow Total-based T-Bucket in past Total Performance catalogs. I seem to recall one Total catalog photo where he used it for his honeymoon transportation, which kind of leads us to the Wintec Roadster today. After getting married and then having children, Brian still loved his T-Bucket, but its use was limited just because it wasn’t “family friendly”. (Above is the “Before” pic). So, working together with Jim Wilkos at Wintech Fabrication, Brian and Jim came up with the above concept drawing of what the family man’s T-Bucket should look like. (Above is the “During” pic). Not surprisingly, the final product came out looking just the way it was envisioned. (Above is the “After” pic). Well, now that the snow in Connecticut has melted, they can finally bring the finished product out into the open. This view shows perfectly the family friendly room that has been created with the new Wintec Roadster. And, what’s really cool is that if you already own an older Total Performance-based T-Bucket that you can use most of what you already have and upgrade to the roomier Wintec Roadster configuration for about $5k. I’d venture a guess that investment will also significantly increase not only the resale value of your T-Bucket, but also should you later decide to sell it that it will likely sell quicker because of the increased utility it offers. We’ve also been seeing a lot of interest lately in T-Bucket soft tops and Wintec has made that a nice option as well. Being a fan of bobtailed T’s, I really love this smooth, all-business view of the new Wintec Roadster. This view of Brian’s new Wintec Roadster nicely illustrates how he was able to use his existing front suspension, grille shell, radiator, headlights, engine, trans, wheels, tires, etc. in the new-look bucket. From this angle, you can really appreciate all the extra leg room this conversion provides as well. To me, the Wintec Roadster is kind of like having your cake and eating it too because you still get the super-cool hot rod look, while now being able to take the family on a nice outing.

10 thoughts on “The Wintec Roadster T-Bucket Kit, “Before” and “After””