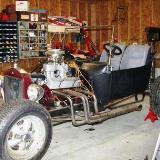 “Should I buy that unfinished T-Bucket project I heard about that’s for sale cheap?” is a question that deserves a thoughtful response with good information. To put that option into perspective, we’ll list the various ways you can become the proud owner of a T-Bucket:

1. Build a T-Bucket from scratch.
2. Buy a T-Bucket kit.
3. Have someone build a turnkey T-Bucket for you.
4. Buy a used or newly built T-Bucket.
5. Buy someone’s unfinished T-Bucket project.

Of course, we’d like to point out that the information in Chester Greenhalgh’s “How to Build a T-Bucket Roadster for Under $3000” will make you more knowledgeable and save you money in any of the above approaches to T-Bucket ownership.

We’re going to follow through one man’s makeover of an unfinished T-Bucket project to give you an idea of some of the things to be aware of and how, with some knowledge and ingenuity, you can cure various “ills” without having to spend a lot of money. First, though, we’d like to thank Steve in Tampa for sharing his T-Bucket undertaking with us. In the winter of 2008 Steve decided to build a T-Bucket, so he sold off some other projects and began saving his money while starting to search for the right bucket starting material. He thought about buying a new kit but then found the “beast” above in northern Georgia and pulled the trigger. On February 28th, 2009 he set off on a 1000 mile journey to bring it home. “At $3,500 I felt it was a great start and a good price,” said Steve. The photo above is how he found it in the guy’s garage he bought it from. I would agree that it was a good deal. It looks like an older Total Performance T-Bucket, which means that it was well-designed and sound when it was first built. It came with a small block Chevy V8, transmission and all the running gear and it looks like most all the parts you need for a T-Bucket are there. But, this is where it gets interesting.

According to the seller, the T-Bucket had been someone’s pride and joy and provided many miles of fun until an electrical fire caused major damage to the body and wiped out the wiring. The body had been replaced with another one of questionable origin, which we’ll get into later. So Steve and his dad and set out for north George in his dad’s motorhome to get the T-Bucket. Steve’s wife is so used to him and his car passion now that she didn’t even question his taking a 2 day trip to bring home a car. According to Steve, it rained almost all the way up there and all the way home it was cold and rainy and the weather broke just long enough for them to load it, as pictured above. As soon as it was loaded it started raining again. Well, they eventually made it back home to Tampa safely and it took its place in its new home in Steve’s garage.

The previous owner wasn’t able to get it running, in light of the fire damage, so Steve dug into the wiring to sort it out and replaced the points distributor with a Mallory Unilite and was able to get it to start, run and drive with some minor brake work along the way.

Here’s a little video of it running and driving, but if you watch close you will see the front brake locking up and some engine smoke. While Steve believed that the engine would stop smoking with some run time he had a better plan anyway. More on that in a minute. As noted earlier, the body on this bucket replaced one that had burned. However, someone had cut off the bottom 4″ of the body and if you’ll look you’ll see that it just rests on top the frame. My guess would be that a previous owner of this body tried to mount it on something like an old truck frame and cut off the bottom of the body, which tapers inward, so that it would sit on the frame and possibly look less like it had just been plopped on top of someplace it didn’t belong. Thinking that the body being chopped off on the bottom made the bucket look weird, Steve rolled up his sleeves and added four inches of fiberglass to the bottom. That was a positive change which helped restore proper look and proportion to the body. Note that the finishing body work will come later. After that, Steve decided that he had to lower the seats. These bucket seats which came from a full-size car stuck way out of the bucket. The first thing Steve did was to remove the seat tracks and that helped, as you’ll note above, but still didn’t solve the problem. Working his magic on the other seat produced a very nice looking result, with no cash outlay. You’ll recall that this T-Bucket project came about because of a fire that fried the wires and the body, so Steve started tackling the rebuilding of the wiring as well as what he was going to do for instruments. After digging though some of his junk he found this ’55 Chevy speedo and semi restored it. Steve’s innovative plan is to convert it into a little console-type instrument pack as he’s mocked it up here. It’s interesting to see how items can be repurposed in a T-Bucket build and I’m looking forward to viewing the final result on Steve’s gauge approach. Now onto that slightly smoking motor that came with the project. Steve had put an LS1 engine in his 1987 Corvette, so he had this great running ’87 Vette motor to use. This is an excellent example of going with a known reliable item, especially if you already have it. Steve knew the history on his ’87 Corvette engine, while the small block that came with the T-Bucket project was an unknown quantity that, owing to the smoke, was starting to become suspicious. Again, this was another “no bucks” change and improvement he was able to achieve. While painting the Vette engine, Steve had a chance to look at the old engine still sitting in the less-than-pristine chassis. He decided that this would be a good time to not only remove the old engine, but do a complete clean-up and repaint of the chassis, which is much, much easier to do when it’s stripped of unnecessary items. The fresh, new motor is much more at home in the newly sanded and repainted, now clean, frame. At this point the car got put on the back burner and sat for 6 or so months, which is not unusual in such situations. When it came time for the T-Bucket to get back to being worked on, Steve bought a nice set of new wheels and tires for it. Nothing like a new pair of shoes to get some fresh motivation. And, this is a night and day improved appearance for this project so far. Now, here’s one of those little “somebody’s project” details you need to be prepared for. You’ll recall that this was a replacement body and while the first picture above shows it with a rather complete windshield assembly — it was just resting on the body. The body didn’t have any provisions for the windshield to mount to, like wood body reinforcement, so Steve had to make some. He started with some 1″ square tubing and cut it to fit then welded up the cut areas. Next, he welded on a piece of flat stock then bent it to fit the area. After that he connected the two sides with a cross bar and ran a support up to the firewall as well. In terms of the new windshield mounting, according to Steve, “That sucker is on there now”.

This is where we leave off for now on Steve’s unfinished T-Bucket project makeover. However, he has completely redone the front axle and brakes, and we’ll be posting pics of that shortly in Part 2 of our story. Steve also has a new wiring harness, battery box, master cylinder, rebuild kits for the carbs and a few other things. We’ll try to cover them in the next update(s) as well. “I’m in the process of adding another shop for parking space so that I can have more room for this guy,” said Steve. So, we’ll look forward to our next installment.

(Note: If you’ve completed or are tackling a T-Bucket project of about any nature that you’d like to share with our many visitors here, just send us some info and pics and we’ll be happy to turn that into something that others can learn from).