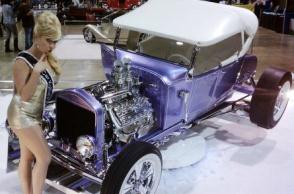 We hope you’ve enjoyed Part 1 and Part 2 of our little 3-part story about Russ Freund’s garage-built T-Bucket that almost captured the America’s Most Beautiful Roadster crown in the midst of a field of high-buck, pro-team built, billet-laden, personality-deficient entries. As further proof that The Takeout T was built by Russ and his buddies of Thee Inland Emperors car club, we offer up this photo of the gang in that cramped Post Falls, Idaho two-car garage hurriedly getting ready for the unveiling at the 2011 Grand National Roadster Show in Pomona, California. Now here’s where Russ’s knowledge of car show judging and his skills really come together. Instead of the usual rat’s nest residing behind most T-Bucket instrument panels, Russ has crafted an arrangement that nobody else might see other than the scrutinizing car show judge on his back with a flashlight who will be rewarded with a view of this functional and visually pleasing treatment befitting the most discriminating concours d’elegance. As opposed to the “smoothster” trend of hiding everything, we think you’ll agree that this view represents an excellent display of finely-crafted, functional components one would expect to see on a true hot rod. From the symmetric gauge arrangement to the coil/battery box and steering box to the tall shifter attached to the Mike Robinson-rebuilt tranny and, I can hardly believe it, both a brake and clutch pedal. Yes, real hot rods do have three. If you’re a true Model T aficionado, like Russ, you’ll note the little chromed original piece by the door that Russ just had to keep for the sake of traditional authenticity. As for that eye-popping purple paint finish, in true Russ form it’s a NAPA Martin Senour custom mix of Archimedes silver with a purple toner. This shot was obviously done during the mock up of the T’s cloth top because the rear window doesn’t yet exist. You’ll see from these shots that at different stages Russ liked to roll the T out of the garage to get an idea of what it really looked like. And just to keep things in perspective, why not compare it to its original source of DNA? Here, Russ has obviously taken the T to his father Claude, whose previously noted ’33 Ford is in the background, to draw on some of his accumulated hot rod building knowledge — and a chance for Russ to experiment with yet another wheel and tire change. And the topless version confirms that many T roadsters look much nicer and more complete with a top attached. To be the builder and owner of both of these significant T-hot rods has to give one an incredible sense of pride and accomplishment. In talking with Russ, it’s his intent to keep them both, which is truly admirable.

The following half-dozen photos need no commentary other than they are in-the-garage detail shots that gave Russ a preview of what not only the judges but perhaps most importantly the thousands of spectators would see when The Takeout T made its trip south to Pomona. In keeping with how this whole “with a little help from my friends” venture developed, Russ called on his Dad’s neighbor Jon Budda for the use of his display and carousel that had been used with his previously mentioned ’57 Chevy custom. When The Takeout T made its debut at the Grand National Roadster Show and was judged for the America’s Most Beautiful Roadster title it was like Mr. Smith Goes to Washington, Rocky, The Rookie, and The World’s Fastest Indian all rolled into one. As is typical the last several decades, of the 12 AMBR candidates, The Takeout T was the only T among nine other ’29 to ’34 Fords. It came away with the AMBR Most Outstanding Engine award, the Jalopy Journal Pick (which most traditional hot rodders would consider the most prestigious), and the Triple Gun Award of Excellence. When I spoke to Russ, The Takeout T had won 16 trophies in 4 indoor shows in about a two-month time frame. It was on its way to the distinguished Boise and Portland shows and likely will capture even more awards, which is all the more impressive when you take into consideration that this is a true “grass roots”, traditional hot rod competing against cars that have been funded with corporate CEO-level budgets. And if you appreciate this little T-Bucket as much as I do, you’ll probably want to order one of the Jeff Allison (remember him as The Takeout T’s pinstripe tape layout artist) commemorative T-shirts that are available at www.Almost-Cool.com. I’ve already mentioned that Russ built The Takeout T as a personal hot rod to keep, not sell. So, don’t be surprised that after a year on the car show circuit Russ and his pals enjoy it like they do his Mantis T Touring.