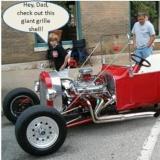 This is a nice looking T-Bucket, but what pops out at you?
The grille shell, right? That giant looking grille shell.
But, that’s not camera distortion and that brings us to the second in our T-Bucket Trip Ups series which, by the way, was suggested by Chester Greenhalgh. If you were going out for a night on the town you wouldn’t be wearing your “high water” pants, would you?
(If you answered “yes”, then you probably won’t get the point of this post anyway). In T-Buckets, as with most everything else we look at, it’s size and proportion that matter. That quickly brings us to our T-Bucket Trip Up: the grille shell should not be higher than the cowl opening of the body. I don’t think people do this on purpose. More often, it appears to have been brought about by using a radiator that just isn’t a good fit for your T-Bucket. And, if you have any question about what kind of radiator might be a good fit — and relatively cheap to boot — then, hurry and download the Free Chapter from “How to Build a T-Bucket Roadster for Under $3000”. It’s all about radiators for T-Buckets and the best free advice you’ll ever pick up on the subject. It’s not rocket science. In fact, in “How to Build a T-Bucket Roadster for Under $3000” Chester builds the example T-Bucket using the exact same Model A Ford grille, but as you’ll note in the photo above Chester has positioned the grille shell so that it doesn’t extend above the firewall part of the cowl and, thus, offers a look that’s more pleasing to the eye. In some cases, particularly with a full-on engine it might take more than a conventional auto radiator. But, just a bit more shopping can produce a suitable radiator and grille shell that won’t obstruct someone’s view from the real beauty of your T-Bucket. Heck, even when you decide to use a ginormous grille shell for a distinctive look you should always consider laying it back, as Todd Mullins did, so that your T-Bucket lines aren’t disturbed. We hope you’ll avoid this T-Bucket Trip Up, because if you’re grille shell is too tall you’ll end up with a truly frightening T-Bucket.