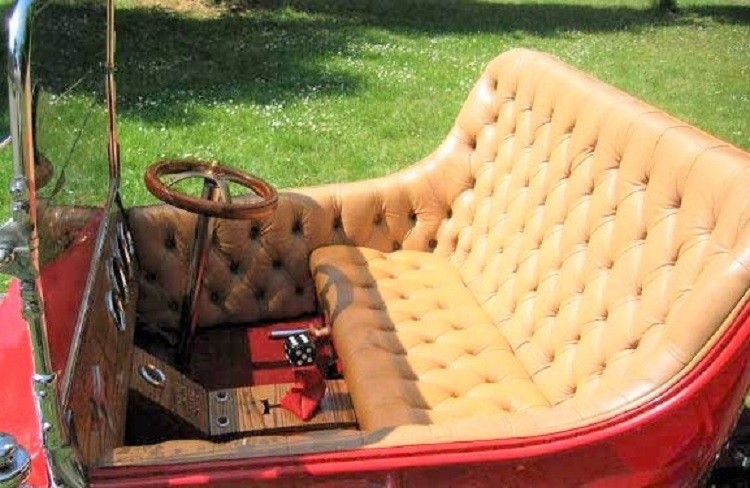 These photos show how the T-Bucket interior fabrication grows. The body is basically a fiberglass shell, but it has a considerable amount of plywood bonded into it for strength.

The exception to this rule was the edge along the top of the dashboard, so for 6 years I had to be careful not to lean on it. This photo shows the plywood dashboard in its initial stages. I decided to have a ‘glove compartment’ as it would be the only place to put anything (except for the pockets of my clothes!) You can also see the rough holes cut for the instruments. Because of the high driving position (or lack of footwells), the car’s instruments had to be mounted at an angle so that I could see them; hence they are not fixed to the dashboard itself.

One of the speakers, the ignition key and lighting switch is fitted to the centre console. The whole of the dashboard is to be decorated with different shades of wood veneer, then heavily varnished. The above photo shows the rest of the centre console with the gear lever and a series of switches for the fuel pump, fog lights, etc. This row of switches would eventually have to go to make way for the other speaker. The fuse box is situated under the seat where it will be fairly accessible. You can see the beginning of the wiring loom starting to emerge from the centre tunnel. This photo shows under the seat where the battery is kept next to the fusebox. On the other side, under the driver’s side are the handbrake and indicators. The raised bit in the middle is the tunnel through which the propshaft passes.

As we continue, you’ll see how Dave Melling constructs his own unique T-Bucket dashboard with some features you may want to consider in your own T-Bucket build.