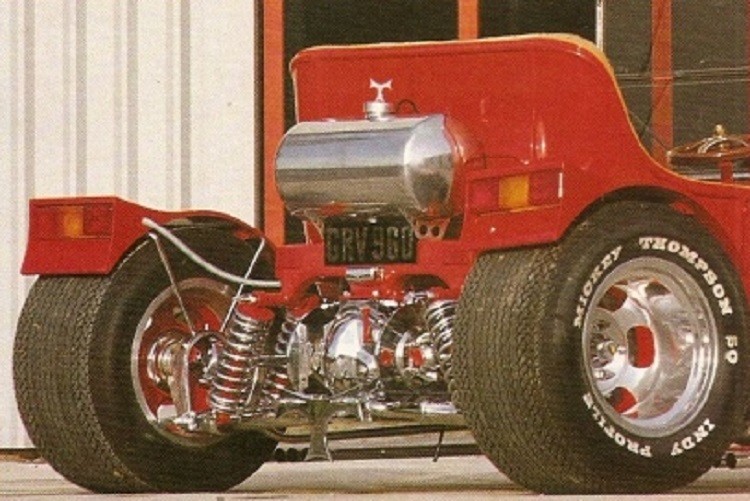 A typical question is, “why would you want to go to all the time, trouble and expense of putting in a Jag IRS when building a T-Bucket?” For one, the Jaguar independent rear suspension rides smoother and tracks the road much better than the conventional rear transverse leaf spring. But, the big reason is that the Jag IRS looks awesome — even standing still. In the case of Dave Melling‘s finished T-Bucket it’s well worth the effort. But where a JAG IRS really shines (pun intended) is when you’re traveling behind one and view all those beautifully chromed parts perform a rotating mechanical symphony. It’s almost hypnotic to drivers behind you when your T-Bucket is sporting a nicely detailed and chromed Jag IRS. And that’s why Dave went through the following. Moving on in time a few months or so, here is the Mk 10 back axle stripped down to its component parts, ready for polishing. Due to the poor state of the components, I eventually decided to get the parts sandblasted, in an effort to remove the rust. The photos show the axle laid out in exploded form more or less in the order in which it fits together.

However, none of the internal parts are shown here such as the bearings and the crown [ring gear] and pinion wheel. These photos show some of the parts after they have been sandblasted and filed down by hand. Unfortunately, the sandblasting failed to remove all the deep pitting marks and I had to file each piece by hand, prior to the polishing! It took months! This photo shows a before and after shot of the central differential casing. It certainly looks better for being chromed — I’ve never seen this done before, as polishing one of these is an awesome task. This photo shows a before and after shot of a hub carrier, showing how much has been cut away, and how the casting marks have been filed off. This has been done to ‘lighten’ their appearance and show off the universal joints on the ends of the driveshafts. These photos show the components upon their return from the chrome platers. There must be almost a hundred bits here, and these are only the major parts! Chroming one of these is not something that you undertake lightly! From his commentary, you know that Dave Melling has done his homework and know what makes a Jag IRS look best under a T-Bucket. Dave’s attention to detail makes us eagerly look forward to the next installment in this series.