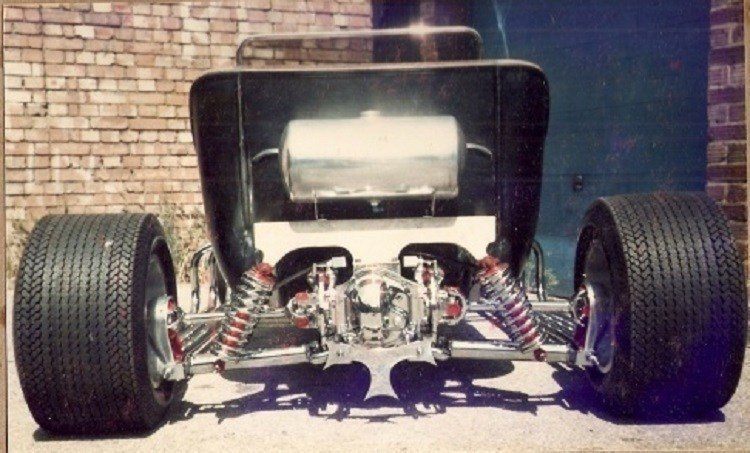 The photos above and below show the completed centre lump with brakes, handbrake calipers and discs in place. The backplate has been bolted in position and the wishbone carriers have been bolted to the bottom of the lump. The four studs sticking out of each disc are ready to accept the universal joint carriers for the half shafts. The main photo above shows the back axle in the next state of its’ assembly, having had the wishbones and the universal joints and half shafts installed. It also has the backplate [differential cover] removed to show the locking differential unit in place. One of the appealing points about using a Jag back axle is the ability to see the half shafts turning, especially when they are chromed and painted as in the above photo.

The main problem will be keeping it clean! This photo shows the completed centre unit, the brake and handbrake detail, plus the tie-bar and pike nuts between the wishbones. Notice that the tie-bar has an angled piece on each end with a hole in. This is where the torque straps attach, to hold the base of the centre unit to the chassis. You can also see how the flange to which the propshaft attaches is off-centre. This is why the propshaft is far from straight when viewed from above. The above photo shows the complete axle fitted to the chassis, with its T-shaped tie-bar and coil-over shocks. You can also see a reflection of me taking the photo in the backplate.

The above photo shows one of the hub-carriers fitted to the end of the wishbone and driveshaft. Note that I’ve used pike nuts again to maintain the appearance. You can see the spacers on the wishbone to which the shock absorbers attach, and to the left of those the gap where the ladder bars are fitted to hold the ends of the axle to the chassis. This photo shows the back axle completely assembled and fitted to the chassis. With the 14″ wide wheels bolted onto the ends, the car is only 2″ short of 7 feet wide! The fuel tank has been added to complete the picture. This is the same shot about five years later, after the chassis and body have been painted. Notice how the chassis is much less apparent now that it is the same colour as the body. Standing by the wheel is Carly, aged two and a half.

So that wraps up our Jaguar independent rear suspension coverage. Get ready to move to the interior of Dave Melling’s T-Bucket next.