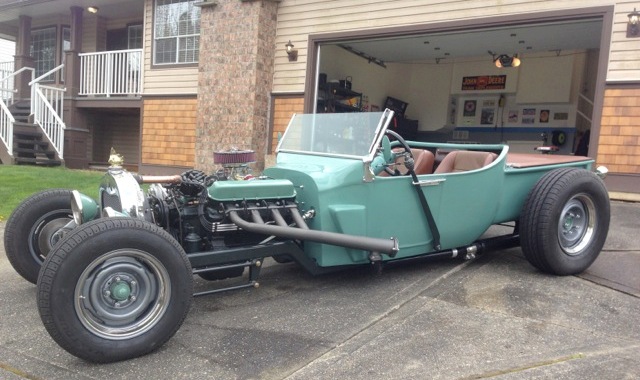 Bought your book a couple of years ago and although I did not follow it to the letter, I did find it very helpful. This is what I just completed. I did almost everything myself with the exception of the seat upholstery. Runs very fast and a lot of fun.

Dave Hiebert
p.s. Already started another one with a completely different theme.

I really admire what Dave Hiebert has done in putting together his very unique home built T Bucket. Of course, I admire the fact that one of the first things he did was to purchase a copy of Chester Greenhalgh’s home built T Bucket bible, “How to Build a T-Bucket Hot Rod Roadster for Under $3000: Kickin’ it Old Skool“.

To start, Dave not only wanted a more usable pickup bed but also more room in the T-Bucket body, both in terms of length and width.

The fiberglass body he started with was an older Total Performance unit, which came with a 14″ pickup bed as standard. Dave decided to add 18″ of length to make the pickup bed a more practical 32″ length in total.

After measuring, Dave rolled up his sleeves and made the cuts in the fiberglass body to allow it to be widened 4” and lengthened 5”.

This was Dave’s first attempt at fiberglass work. These kinds of fiberglass body modifications can be much easier than you might think, especially if you have some good information to guide you like the StreetRod 101: Fiberglass Body Modifications DVD available at our sister site, StreetRodPlans.com.

And what would a home built T Bucket project be without primer applied with spray cans?

With his newly enlarged T-Bucket body, Dave did the right thing by mocking it up on a wood frame before cutting and welding steel.

According to Dave, the frame is 2” X 3” X 1/4” wall steel tube and to achieve an overall low stance it was built with sizable kickups in both the front and rear.

For the rear suspension, Dave decided to go with a four-bar setup with panhard bar and coil-over shocks.

Continuing his quest for a home built T Bucket different from the rest, Dave decided to go with the torque monster 472 cid Cadillac which necessitated building his own headers.


While still in the early construction and mockup stage it was the ideal time to design and build the headers and figure out the positioning of the exhaust.

The big-inch Cadillac was mated to a Turbo 400 transmission and when it came to the short driveshaft to mate to the rear end with 2:73 gears it was one of the few instances, other than upholstery and radiator, where Dave used outside fabrication.

Dave fabricated the fuel tank from aluminum and it holds a reasonable 18 Imperial gallons.

Dave noted that the paint was done with Alpine Green spray bombs then wet sanded to 2000 grit. It was then clear coated, also with spray bombs, wet sanded to 3000 grit then polished with 5000 grit buffing compound and then waxed and buffed. According to Dave, it turned out very good and the photos confirm that. The headlights are 1927 model T units that Dave converted to halogen and then mounted LED turn signals into the headlights. Dave notes that the 32″ pickup box is perfect to accommodate the fuel tank, battery and hide the electrical away under the storage space. The seats were from a 1998 MGB, and as they were too tall, Dave cut the back down 5” and then had them upholstered with heaters. Fiberglass transmission tunnel is covered with leather. Dave Hiebert’s T is an excellent example of the fact that with some relatively simple research and planning you can build a home built T Bucket that’s one-of-a-kind. So, what’s stopping you? By the way, if you’ve already built your own T-Bucket and you’ve used our plans send us some photos and details and we’ll be glad to share your achievement with our readers.