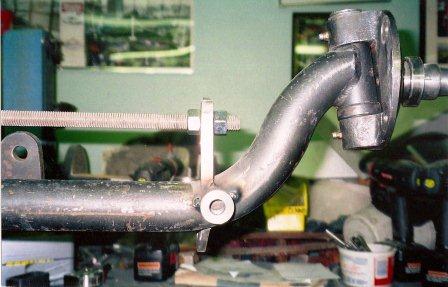 Today, Bob Hamilton shows you how to align T Bucket bat wings on your front axle. Also called spring perch brackets, Bob shows an easy way to ensure you get them properly aligned. This is the eleventh installment in our series documenting how the creator of the popular StreetRod 101 DVD series builds a 1927 T roadster using only a modest budget and loads of experience.

So far, Bob started with a fiberglass body that had been carved up for drag racing purposes. He filled in a previously cut out section of the rear deck, installed a floor, began building a tapered frame that follows the 1927 T’s body contours and constructed the front and rear crossmembers, rear suspension and panhard bar, positioned the engine, mounted a vintage Mustang steering box and constructed the transmission crossmember, built motor mounts for a small block Chevy engine and began to position the front axle.

Follow along today as Bob shows you how to properly position the spring perch brackets, or T Bucket bat wings on the front axle. “This picture shows a front-on look at the alignment of the T Bucket bat wings or spring perch brackets.” “Here is a close up of the actual way in which the bracket is held in place. A nut on each side holds the bracket in place and allows for accurate adjustment. So now you ask yourself, how do I get the all-thread out after the brackets have been tacked in place? Two ways this can be done. One, is to simply cut the all thread in the middle and pull each end out. The other way is to use two pieces with a coupler in the middle and just screw the two halves together and lock in place with a nut or two and then do the adjusting at the ends.”

For even more of this helpful instruction and loads of time-saving how-to’s you’ll want to check out the entire StreetRod 101 DVD Library that you can order from our sister site, StreetRodPlans.com.

We’ll keep adding new installments in this cool 1927 T roadster series so check back regularly for the latest.