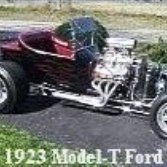 “Josh carefully peeled back the soft gray cloth covering his 1923 Model-T Ford. Dubbed ‘Bad Attitude’, the black paint job on the hot rod, generally called a T-Bucket, gleamed under the shop lights. Ghost flames shimmered across both sides of the body. His chest swelled with pride observing the blower, scoop, 502 big block Chevy engine, and the nice intake manifold he got off Kenton Sylvan.”

A crime novel with some cool T-Bucket intrigue woven in — sounds just like the kind of reading material to load on the Kindle to take to the beach this Summer. According to novelist, Sharon Austin, “In my mystery novel, SMOKE ON THE WATER, Sheriff Joshua Wolfe doesn’t ride a horse. He uses horsepower. With a 502 BBC engine, he uses a lot.”

“Smoke on the Water is Part 1 of the Hellfire Mystery series. Part 2, Fire Flicks, is also available. Part 3 is a work-in-progress. In this story, the sheriff is a private citizen. He plans to follow the car show circuit, and work as a vendor while entering his T-Bucket in each event.”

Novelist Sharon Austin intimately knows her subject matter when it comes to T-Buckets. At one time, she and her husband were a distributor of T-Bucket and hot rod parts and the “Bad Attitude” T-Bucket in her novels is based on their own award-winning bucket. Currently, she’s traveling the country in an RV and soaking up inspiration for her next novel. Sharon’s cool series of crime novels can be downloaded from Amazon.com, where they’re available in the $2.99 Kindle eBook format. Sounds like the perfect summer relaxation material.

1 thought on “Ready for some T-Bucket content in your Summer mystery reading?”