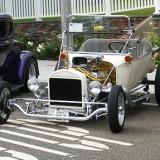 Just happened to be in Southern California on a weekend that coincided with the El Segundo Police Officers Association 13th Annual Main Street Car Show. I’ve attended before and I really like this kind of car show where the main street in town is blocked off and you get to leisurely wander while viewing the cars and when you’re in need of a little rest, just pull up a chair at a local restaurant, watering hole or cafe. Took a few pics and wanted to share my “Top 3 T-Bucket Picks” from the show. (Who am I kidding — there were only three T-Buckets there, but it was a great show anyway).

To start, no Southern California show would be complete without a California Custom Roadsters T-Bucket. I’m not sure if Ed Gorlek’s was a CCR turnkey build or was built from one of their kits, but when strolling past hundreds of cars the unique CCR front suspension treatment always catches my attention. 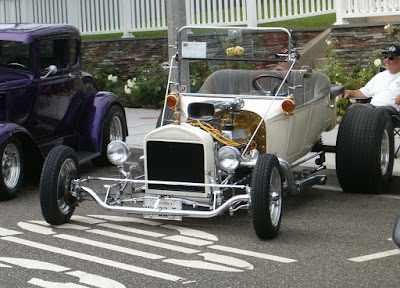 With a tasteful amount of chrome and a very nice white paint job, it was good to see Ed had also chosen a Ford to power his Ford. 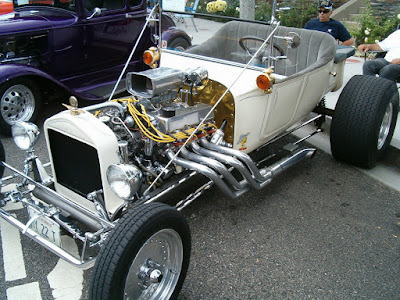 When looking at the rear end, though, Ed’s T-Bucket had some changes done to what looked like a previously buggy sprung rear axle (the former CCR spring mount brackets were still in place). Evidently, Ed must have chosen to seek a more comfortable ride with a coil over shock setup and in doing so also changed the rear radius rods to a four-bar style and applied some creativity to also incorporate a really heavy-duty looking step for getting into his bucket. 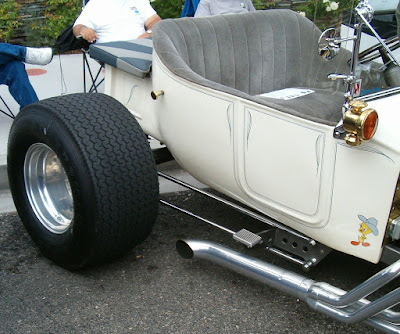 Overall, a very nice, clean T-Bucket that fit into the Southern California setting with ease.

The next bucket to catch my eye was Patrick Copeland’s red T-Bucket that had the distinct look as being a home built bucket from the past with its I-beam front axle, with the spring mounted on top of the axle. 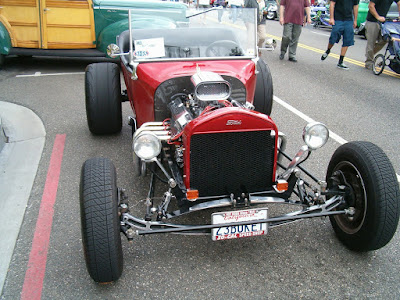 Patrick had also chosen a Ford engine and the car cut a nice profile with what appeared to be an almost 4″ channel job. 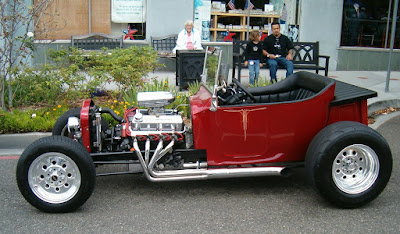 Further confirming my suspension it might be an older home built T-Bucket was the use of what looked like a Ford truck steering box, rather than the more conventional contemporary Corvair or Vega boxes. 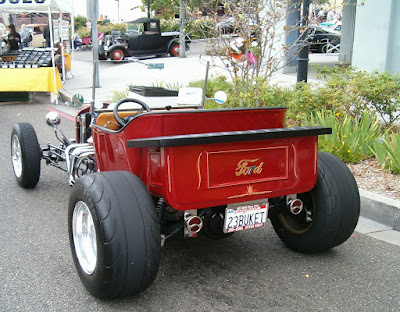 Further on down the street, in a bit more “scruffy” surroundings, I caught the 1926 Ford T-Bucket of Richard Nuss. You might want to call this rusty, flathead powered T a “rat rod” but to me it appeared to be built in respect to how hot rods were built on a budget more than half a century ago. 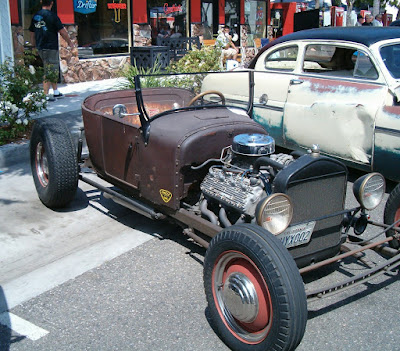 While Richard’s rusty rod had a few modern touches, nothing seemed overly out of place and this little bucket had a great stance with its quarter elliptic extended front suspension. 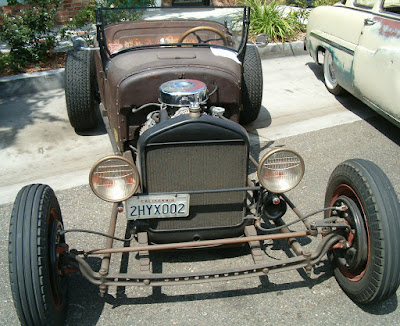 Whether coming or going, this little T-Bucket had the look of fun all over it. There is a lot to be said about simplicity and exposed mechanicals. 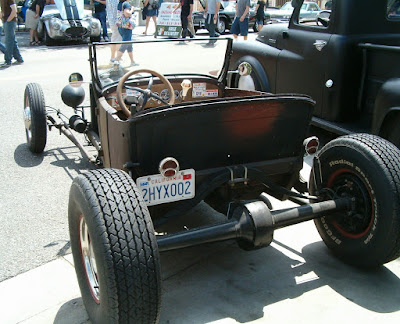 It was a fun morning taking a relaxed stroll down the main street of El Segundo and getting a chance to see a large number of beautiful Golden State hot rods. I might even expend this “Top 3” idea to other shows I visit.