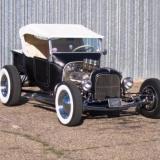 A few years ago, while pouring over posts on the H.A.M.B., I was fascinated by some photos of what appeared to me to be the most “perfect” T-Bucket I had seen. Posted by “Royalshifter”, I recall these as the first two pics I saw of that particular T. To me, it was perfection, but after lovingly glaring at the pics for an extended period of time I got a weird feeling and began to ask myself, “Is this T for real?” I’m not kidding about questioning its authenticity to myself, because in the back of my mind I thought this could have been an excellently built model car. The more I looked at the surface it was resting upon (those aggregates seemed awfully big in proportion to the rest of things) the more I felt like the sailor stranded on that island envisioning a mermaid. But this car’s vision also brought up memories from my past. You see, while still in grade school I would frequently reserve my lunch money to buy “little pages” car magazines from the drug store I stopped in after school. I fondly recalled a “Rodding and Re-styling” cover from the June, 1959 issue. Sure, it was a ’27 T back then, instead of the ’22 T that had now captured my attention and the cover car had that crooked Dodge front axle, instead of the smooth V8-60 tubular version made popular by Grabowski and Ivo that was on this T in the photos I was admiring. But, they both had a beautiful black finish accented by white pinstripes, top and interior, as well as a Deuce grille shell. Hey, even the photo backgrounds were similar. My apprehensions were removed, however, when I later learned that this stylish T was owned by Skip in Fresno and when I saw even more pictures I was convinced this was for real. Now, with Skip’s kind permission, I’m happy to share these photos as an example of what I believe to be the perfect example of a traditional T hot rod roadster, and I’m just one of many who have expressed that same distinction for this car. Whatever you’ve head about stance and proportion, Skip’s rod exemplifies what it should be. But, that’s not all. You can’t get more simply elegant than with contrasting black, white and chrome. If you can’t get enough of this T, then hurry and order back Issue #18 of Traditional Rod & Kulture magazine, which is still available with a nice 4-page feature on Skip’s T. I won’t go into too much detail on this ’22 T other than to mention that it’s one of the few T-Buckets you’ll find an original T frame (although it’s been boxed to handle the small block Chevy) and I almost forgot to mention that it’s an original steel body and the hot rod build started in the early 60s and was brought to its present state of perfection by Skip after acquiring it in the mid-90s. From a wheel and tire perspective, in my opinion you just can’t beat wide whites, chrome reverse rims and baby moons. Skip’s T would be the perfect model for a Coker ad. As for that beautiful white soft top, Skip used modified ’31 Ford roadster top irons and made his own top bows and header. He found a sewing machine at a yard sale, bought some boat naugahyde, made his own patterns and voilà, all for about $400.00. So, enough of my adulation — enjoy the photos. To reinforce just how cool this hot rod is, it has been immortalized by artist and hot rod builder, Von Franco, who after building two Norm Grabowski T-Bucket clones knows what a great looking T looks like.

I hope you enjoy and receive as much inspiration from Skip’s T as I do.

8 thoughts on “Is This the “Perfect” T-Bucket?”