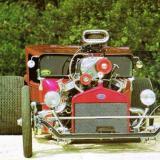 A few years ago, while surfing the web, some photos of a super-low supercharged T-Bucket really caught my eye. Then, I was shocked to notice the steering wheel on the right hand side and learned the bucket builder’s name was Pip Biddlecombe. Those two facts could only mean one thing: this mind-blowing bucket was British built! Turns out Pip is a well-known U.K. hot rod builder who in the 70s built a rather famous Austin known as Rubellion, which was powered by a blown Daimler hemi. I believe that today Pip is into military vehicles, like tanks. Pip’s radical T-Bucket was featured in “Rod Action” magazine back in 1986. Based on a 1 1/2 x 3-inch rectangular tube frame, it was only natural for Pip to employ a Jaguar independent rear suspension and a very nicely dropped 1940 Morris I-beam front axle. The one-piece fiberglass top flipped up for “step-in” entry into this extremely low-profile T-Bucket. You gotta’ love the simple, clean interior which featured a Pip-built chainlink steering wheel topping a short vertical column coming out of the floor. Speaking of floor, that’s where the two sparse bucket seat cushions were placed with the automatic tranny shifter mounted in between. With its extremely low profile and ground clearance, though, it was not a trailer queen and was driven to rod runs and shows around England. And Pip gets huge points from me for his unique choice of motorvation (even more so in the U.K.), a 389 cubic inch 6-71 blown Pontiac fed by a pair of Holley 600 series carbs. In case you’re wondering, the windshield height was listed at a mere 9 inches which was certainly tough on headroom and creature comfort, but who can argue against that sinister low profile? I had always heard Pip’s T referred to as “Low Blow” and would guess that was emphasized by the tailgate question, “How low can you go?” I’m a huge fan of this car, despite the fact that I later learned it was likely very much inspired by another radical T-Bucket which was built a decade earlier. If you love the look of Pip’s super low T-Bucket, then you’ll want to check out our story on Scott Ellis and the original Low Blow, as well as our combo story on The Two “Low Blow” T-Buckets. Somewhat surprisingly, a lot of great looking T-Buckets have been built in England and I’d have to say that Pip Biddlecombe’s “Low Blow” has to be one of my favorites.