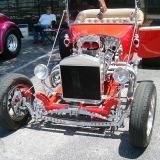 There appears to be no end in sight for this lousy midwestern winter weather and because of that my mind keeps wandering back to my enjoyable spring visit to the Sun T’s of Central Florida show and cruise at Old Town in Kissimmee. If there was a theme among the assembled T-Buckets at that event it would have to be stretched T-Bucket bodies. You’ll recall my recent post about Jim Hoffman’s beautiful T-Bucket with a stretched cowl. Evidently, in Central Florida a lot of Dave Koorey T-Bucket bodies with a nicely stretched cowl were produced because they were everywhere I looked that day. I also hope that as a result of this post the owner of this great looking red T-Bucket will come forward to identify himself because in my rush to take everything in I spent time talking with him about his stretched body T-Bucket but neglected to get his name before I left. I was evidently too busy drooling over all the beautiful detail embodied in the front end of this well-constructed T-Bucket, from the cool ten spoke front rims and nicely disguised disc brakes to the absolutely beautiful chromed and dropped I-beam front axle as well as the rack and pinion steering that blends in so well that you might think Model T’s came that way. The fact that I’m a lover of button-tufted upholstery may have also distracted me when I set eyes on this tasteful interior. The owner of this bucket spent a lot of time working with the body to get it just right and he spent many more hours seeing that every detail was perfect in this perfectly pleasing blending of Fad-T elements of the past with modern hot rod technology.