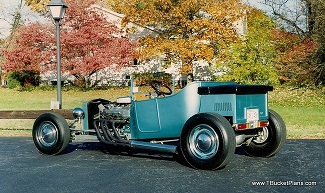 Dale Setford of Delmar, New York, decided to build a budget T-Bucket years ago following the detailed plans laid out in Chester Greenhalgh’s “How to Build a T-Bucket Roadster for Under $3000”.

Dale was kind enough to share his photos and story with us and we felt you’d like to see just what can be accomplished when someone uses Chester’s T-Bucket “bible”. From time-to-time, we’ll be doing stories on others who decided to build a budget T-Bucket using Chester’s eBook. If you’re one of the many who did, let us hear from you and we’ll be happy to highlight your handiwork here, too.

As a member of the baby-boomer generation of hot rodders that believe you should build them yourself, some might consider Dale an older (67) hot rodder but you’re only as old as you feel. Dale built this T-Bucket in the 90s and according to Dale he made everything, including the headers. He even built the Ford 351 Cleveland engine and the C4 transmission. Starting out, Dale used a ’38 Ford I-beam axle, to which he welded batwings he’d cut out using Chester’s templates, along with the prescribed front spring perches and gussets. It’s good to note here that Dale is a certified welder and CWI (Certified Welding Inspector) who worked as a manager for a major railroad. We told you Dale said he made everything and you can see his handiwork here in his home-constructed grille shell. You can also see that he’s added Chester’s recommended pre-1977 GM intermediate size disc brakes because building on a budget doesn’t mean scrimping on safety. From this view you’ll see the those GM disc brakes are nice and compact and look great with any kind of wheels other than super skinny wires. They’re mounted to the early Ford spindles using brackets and adapter sleeve as described in the eBook. At the back of the chassis Dale decided to use a rear spring made from a ’48 Ford front spring. He made a decision to deviate from the plans on the rear spring mounting position, moving it outboard of the rear crossmember rather than the inboard version Chester uses. This gave him a bit more clearance in the pickup bed and you’ll see why later. That’s what’s great about building a T-Bucket: when you have the plans to start, along the way when you think you’d like to do something a little bit different to suit your needs or desires it’s easy just to adapt the plans to your own. With the rear end mounted using the batwings and rear spring hangers from the plans, you can see the rear radius rods that follow the general plan Chester laid out, but Dale made a couple of his own changes. He used 7/8″ iron pipe, rather than 3/4″, to ensure he had a bit more stiffness for the torque of the 351 engine. He also decided to weld fine thread nuts on the pipe to have more adjustability and used new rod ends. Here you’ll see the rear spring hangers and shackles as per the plans, with the motor mounts using Chester’s design above them. In Chester’s build a budget T-Bucket eBook, he shows how to make your own pickup bed using scrap metal from old pickup trucks. Exercising his creativity, Dale had access to scrap metal locker doors and voilà, a pickup box with nicely louvered sides at no extra cost. Of course, he built his own fuel tank as well. Lot’s of people wonder how to go about wooding the interior of a fiberglass T-Bucket body, not only for additional strength, but also to provide a frame work for attaching upholstery. Chester’s plans show just how to do it and Dale did a great job. You’ll also see he followed Chester’s plans as well to make his own very nice wood dash. Of course, the plans also cover building an inexpensive, but good looking steering column. If you’re a Chevy guy, Chester even shows how to build your own low-buck shifter, but since Dale chose a Ford C4, he went with a nice looking Mustang shifter. Dale also did his own upholstery. It’s all coming together in the driveway and you’ll note Dale is in the process of cutting out a nice, reflective firewall cover. Here’s another view that shows the Chester-designed budget front four-bars. The eBook also covers the use of various types of steering boxes. Now, we’re getting somewhere! Dale did his own paint and, as you’ll note dangling above the rear end, he did his own wiring. The eBook actually has a step-by-step plan for wiring a T-Bucket that you can follow and not even have to worry about reading a wiring diagram.

Build a budget T-Bucket for fun AND profit! Those taillights are from a ’71 Maverick, and Dale acquired parts to build his great looking T-Bucket from various places, friends and his own pile of stuff. When it was all added up, Dale said he had $1800 in it, and sold it for $5000! He said that the car is owned by someone on Long Island, but is now purple and has a turtle deck. He spoke to the owner a couple years ago because he had called him about replacing the torque converter after many road miles.

According to Dale, “I have done a lot of projects and each one is better”. To me, that’s what it’s all about. And Dale didn’t stop with his first T. Above is another T Dale built but as he said, “with a lot of store bought parts.” Based on his past T-Bucket building experience, though, he did build the frame and hood and painted it and did the engine and trans. Another great looking T from Dale.

Dale also noted, “I am doing a 1967 F100 now as I need a truck and refuse to give Ford $45,000 for a new one. Believe this or not but I am gathering parts for another”. Hmmmm, seems like Dale might be ready for one of Chester’s other eBooks at HotRodTruckPlans.com.

Kidding aside, we love Dale’s story about how he was able to build a budget T-Bucket with the plans in Chester Greenhalgh’s legendary eBook. We’re planning to bring you more so if you’re reading this and have used Chester’s plans in your own build let’s hear from you (info@TBucketPlans.com). Everyone can benefit from seeing what others have done in their own unique T-Bucket building experience. Thanks Date Setford. Your story is a great one.