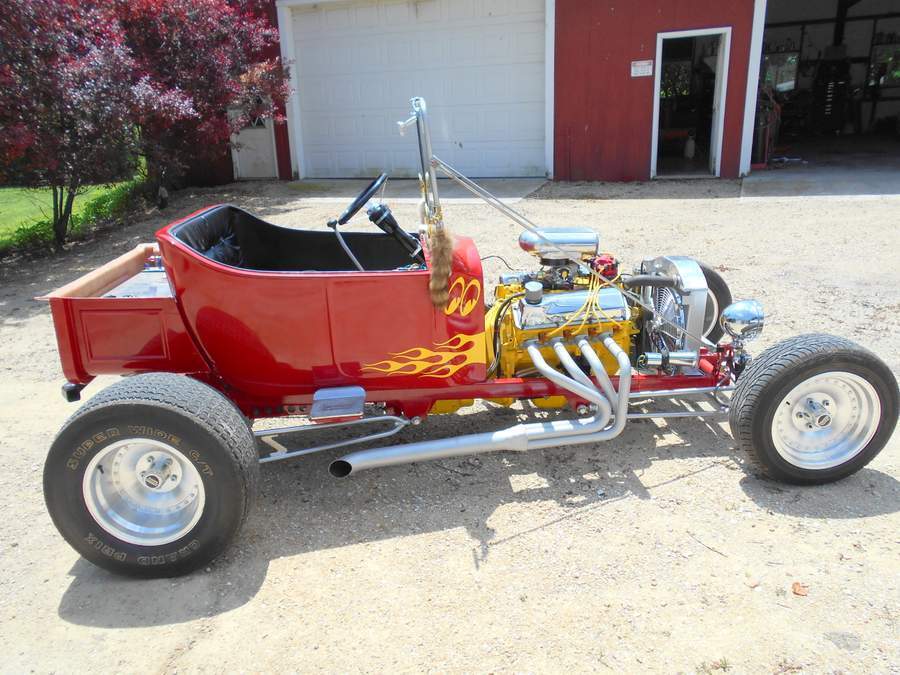 Note: I originally posted this story last December, but for some unknown reason the images disappeared and I only got around to fixing that now. I’m reposting it  for anyone who may have missed the cool photos and because I love Gary’s budget T-Bucket.

To me, there’s nothing more enjoyable than learning about someone who makes their T-Bucket dreams come true with help from our plans. Here’s an inspiring story of one T-Bucket builder that I think you’ll enjoy.

In December, I sent emails announcing our Chester Greenhalgh hot rod how-to eBook combo specials. One of the nice responses I received was from Gary Monsarratt:

“I got the plans from you about 2 years ago. Plans for the frame worked out great for me. A lot of good stuff in that book. Thanks”

Gary’s message was short, sweet and much appreciated. But the attachment he included really had a big impact on me.

You see, I recalled corresponding with Gary a couple years ago and it’s always great to see someone’s finished T-Bucket project, especially when they’ve done it with help from our plans. I asked Gary if he might share some photos and info on his own custom T-Bucket build and he kindly obliged. 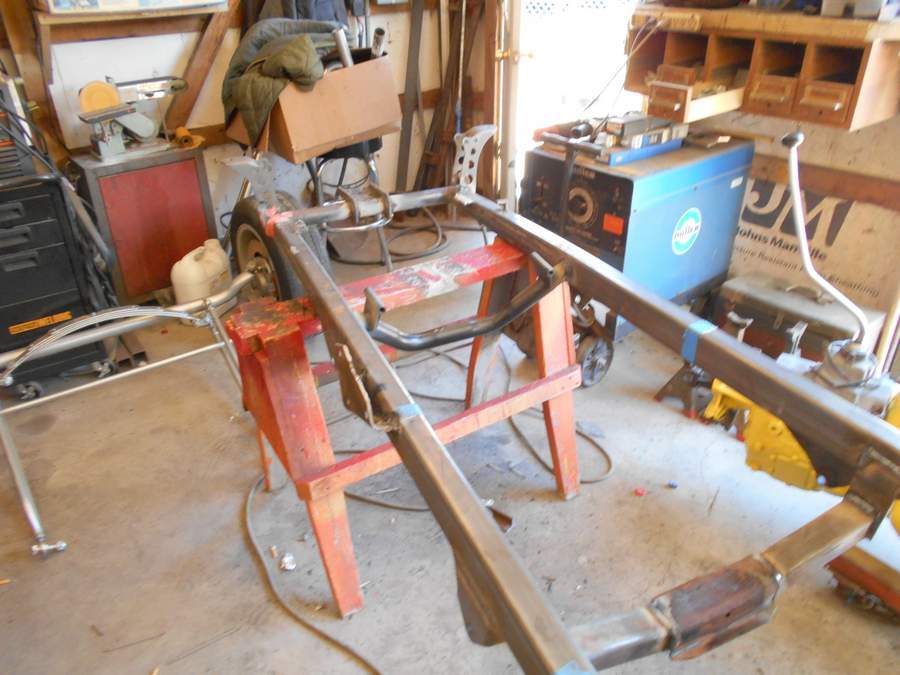 To set the stage, Gary Monsarratt is a retiree in his early 60s who lives in Paw Paw, Illinois (a village of about 350 households some 75 miles west of Chicago). According to Gary, “T-Buckets are the real hot rods of all time. Nothing comes close.” I’m describing Gary’s build as a custom T-Bucket because I agree with Gary when he says, “Every T-Bucket I’ve seen is different — no two are alike.”

As great as his looks, you’ll be interested to know that Gary’s T-Bucket project was completed in about 18 months with a budget of only about $6000.

Gary’s custom T-Bucket project started back in the Fall of 2016 when he downloaded a copy of the late Ron Young‘s “Youngster” Free T-Bucket Plans that we offer. The frame was fabricated from 2×3″ rectangular steel tubing (3/16″ thickness) and following the Youngster plans he tapered the front portion of his frame rails so that they blended into the 2″ diameter of the tubular front crossmember. According to Gary it “really makes a difference in looks … more welding, but a nice look.”

A couple weeks later Gary sent an email expressing interest in Chester Greenhalgh‘s “How to Build a T-Bucket for Under $3000” eBook and asked if we had hard copies available. I responded that we did not and noted why as we explain in our FAQ about that. The same day, Gary entered his order and downloaded his 250+ page eBook to get started. 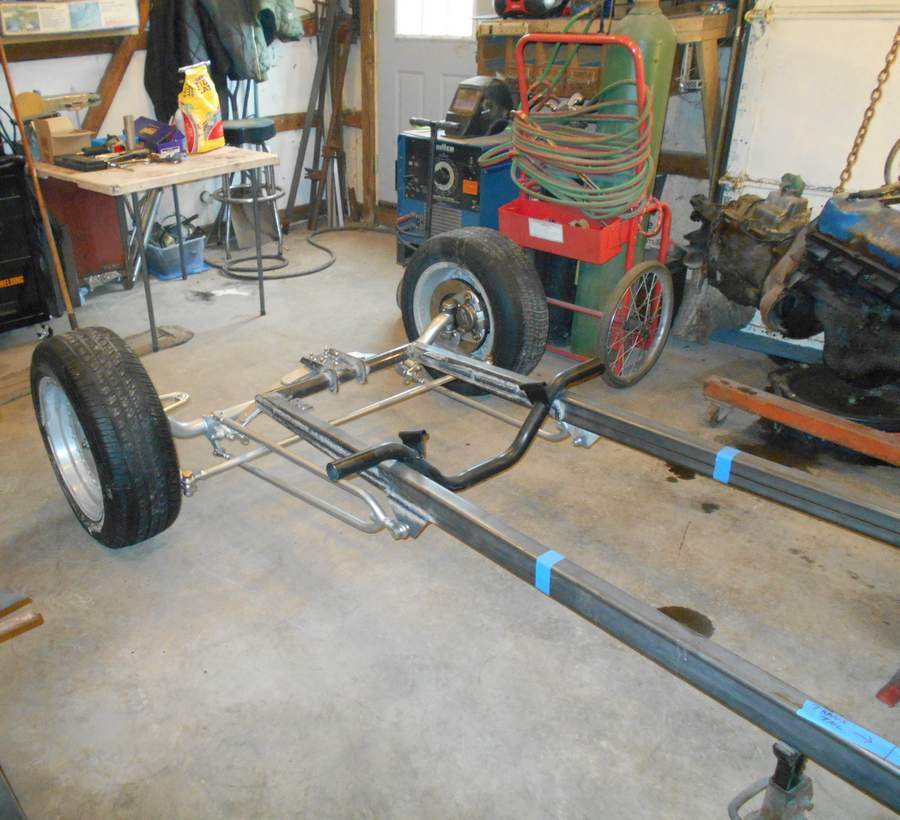 Yes, this was a budget build but not bare bones budget. While Gary did the welding and fabrication he decided not to do everything himself and to use modestly priced components where it made sense.

For example, the 4 inch dropped front axle with Ford spindles and disc brakes came from Speedway Motors. In Gary’s opinion it’s hard to find used dropped axles these days and he feels that a 4″ drop makes a T sit nice. For those looking, it’s good to know that Ron Pope Motorsports has a nice budget offering of a Dropped Tube Front Axle Kit that’s ideal for T-Buckets.

The tubular motor mount seen in the above pic is another Speedway item. 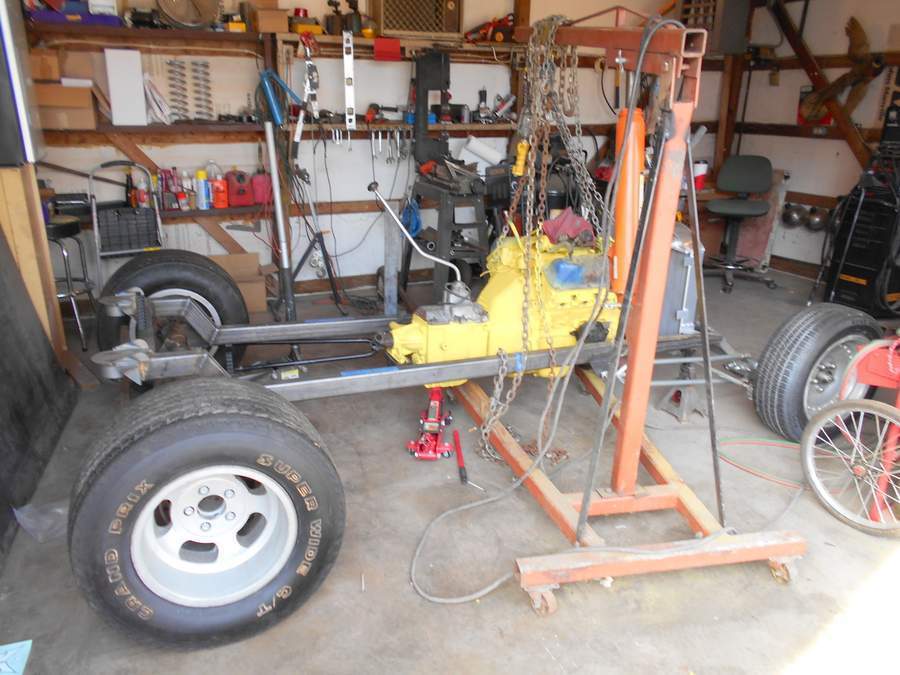 When it came to powering his T, Gary followed Chester’s suggestion on how to build a T-Bucket on a budget by getting a cheap donor vehicle, which in this case was a junked 1977 Ford F-250 pickup. That provided the 351M engine as well as 4 speed manual transmission. I must say, that was a really clever choice with its stock tall shifter. The donor truck was also harvested for its steering box and Gary was able to use the steering column too.

Another custom touch Gary chose was the use of coil springs for the rear suspension. The weld-on coil spring mounts were another Speedway Motors component and they were used to suspend the junkyard Ford 9 inch rear end. 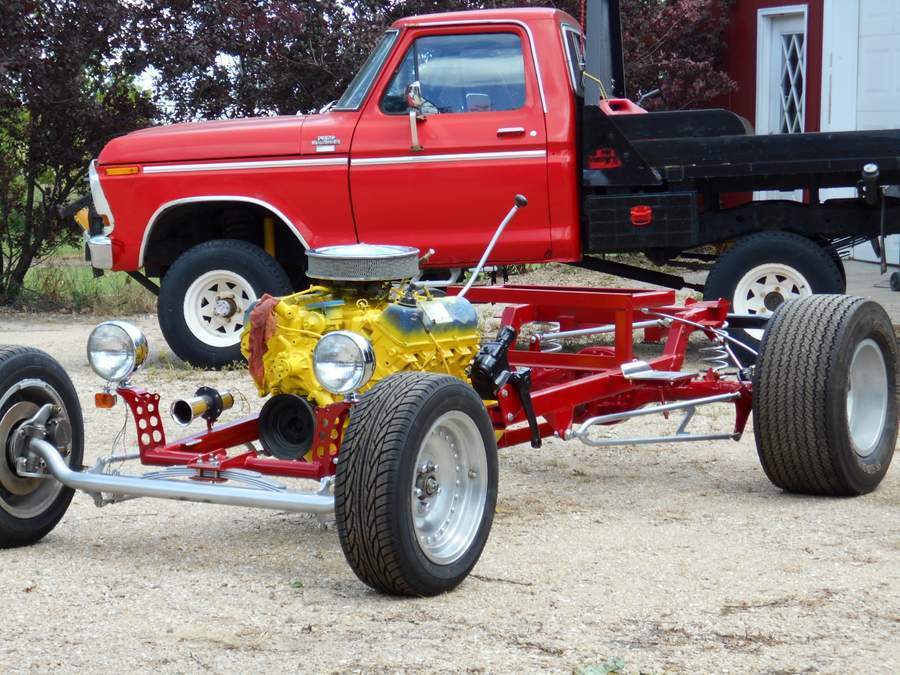 Gary made his own mount for the pickup truck steering box and turned to Speedway again for the weld-on headlight mounts. He also decided to upgrade the rear brakes with a drum to disc conversion kit from Jegs for the junkyard 9″ Ford rear axle. 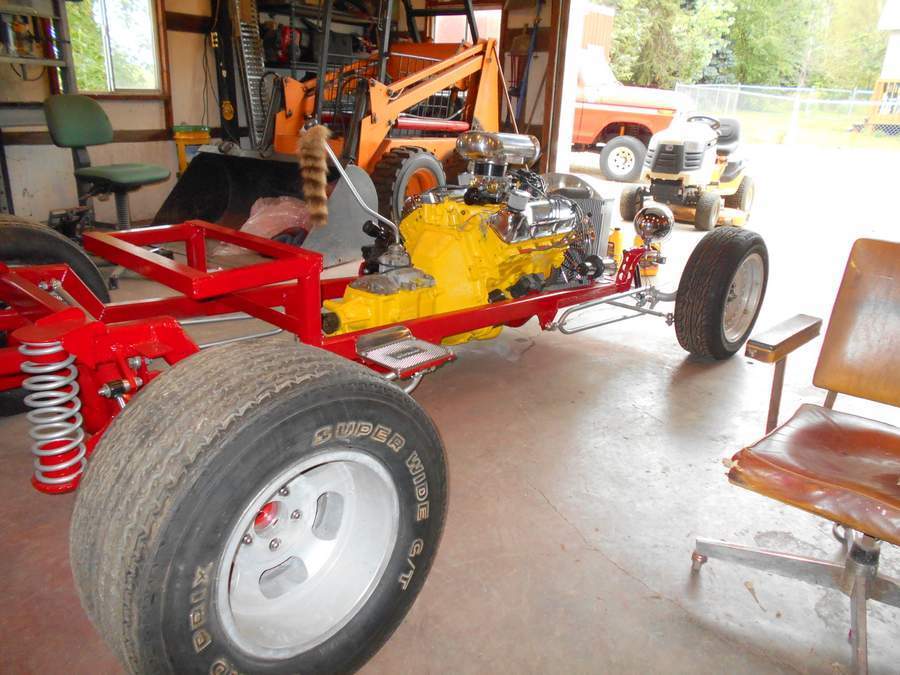 I noted that this was a custom T-Bucket that was designed and built to fulfill the owner’s vision. Gary’s 6′ 1″ and wanted to be comfortable driving his T-Bucket. While 90% of T-Buckets have the body channeled over the frame rails, Gary chose to build an unchanneled T for the greater seating room. And while 90% of T-Bucket builders with a channeled body use a wood seat base, Gary fabricated his from steel as an integral part of the frame and achieved great leg room as well as for clutch pedal actuation.

Of course, the under the seat space is also occupied by the battery and 12 circuit electrical system/fuse box. The sturdy seat frame also provides secure mounting for seat belts. 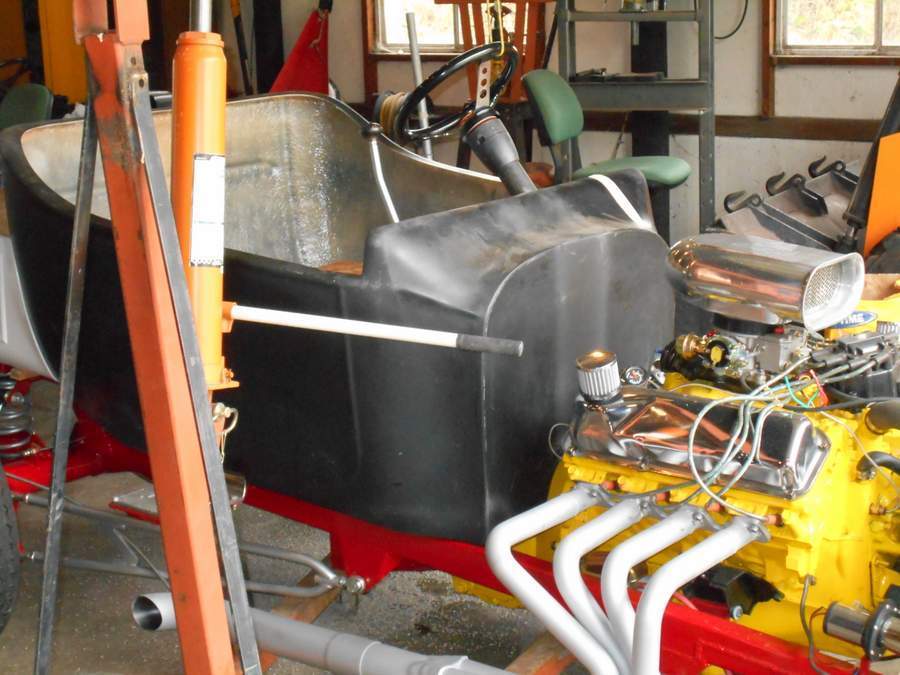 And when it came time to procure the body Gary turned to the budget T-Bucket body source, Cromwell Molding Company in Minnesota. 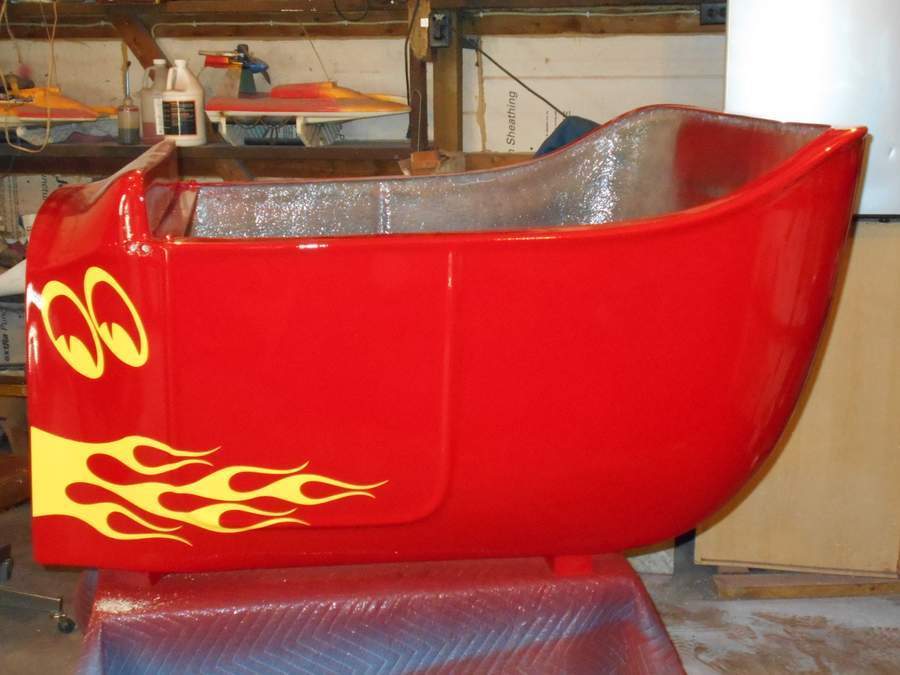 Gary also chose to paint his T-Bucket himself and went with a nice bright shade of red. The great thing about painting a T-Bucket on a budget is that one just doesn’t require a lot of paint. In Gary’s case, only about a half-gallon for the frame, bucket, and pickup bed. Graphics are always a nice custom T-Bucket touch and the yellow Mooneyes and flame graphics help to highlight the engine block. 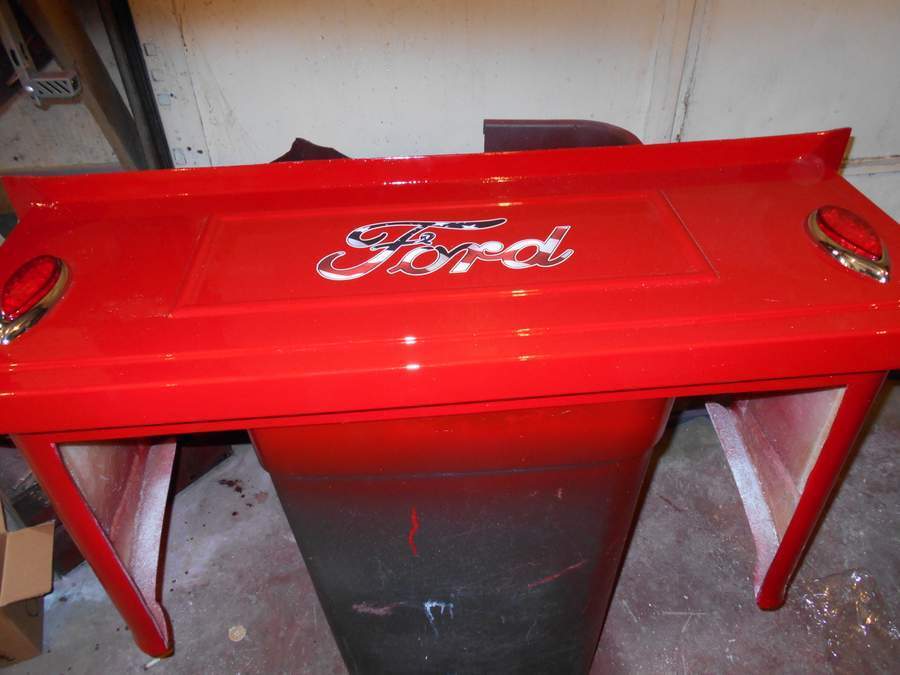 For the fiberglass pickup bed, which came from Speedway by the way, Gary went with a patriotic Ford script graphic and ’39 Ford style taillights. 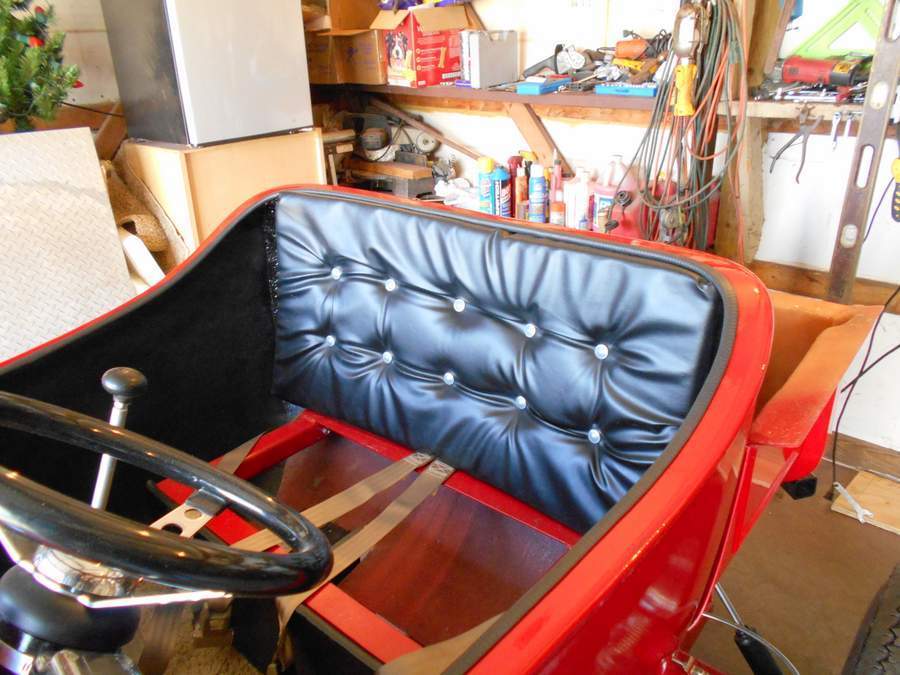 Continuing in his do-it-yourself budget building mode, Gary did his own upholstery in black vinyl with a button tufted square design. (I’m going to stop for a plug here because I think anyone building a street rod will benefit from the very informative new Basic Hot Rod Upholstery 4-DVD set that Bob Hamilton has added to the informative StreetRod 101 DVD series). 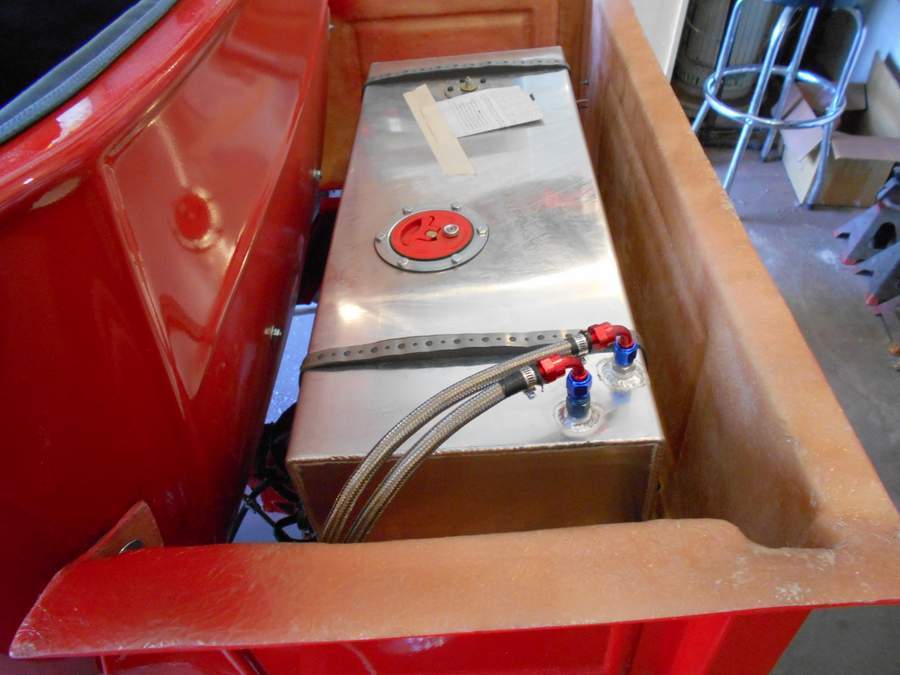 Gary wanted to be able to do some real highway cruising in his T-Bucket and another custom touch to his T-Bucket build was choosing a fuel tank 50% bigger than most at 15 gallons. 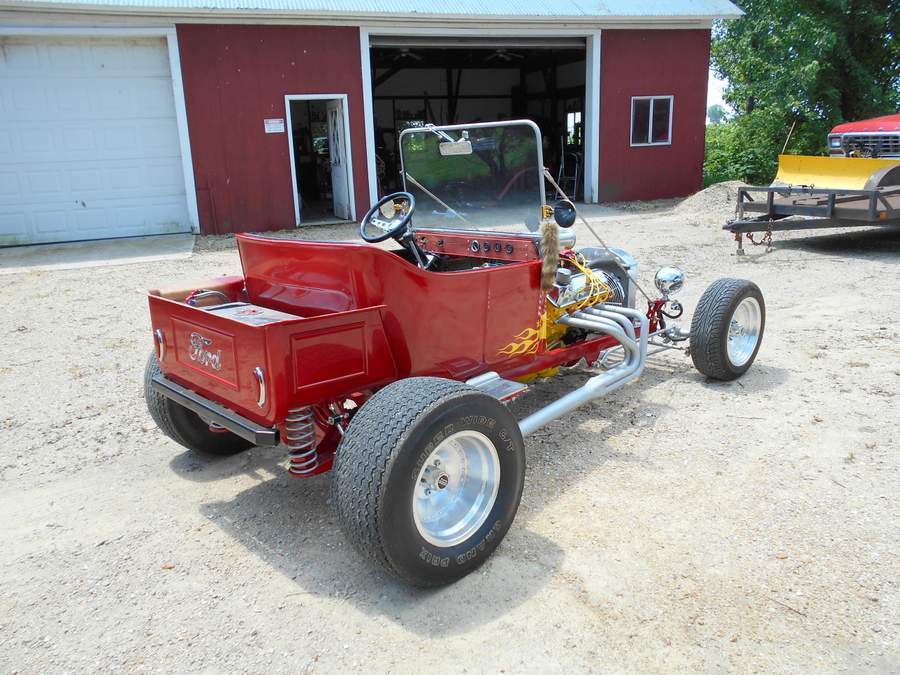 In his eBook Chester also shows how to build a nice wood dash panel that makes wiring and maintenance easy and if you look at the photo above you’ll see Gary’s that he made of pine with red gun stain.

Another nice custom T-Bucket touch is a subtle steel tubing rear bumper that’s tied into the T’s rugged frame. Being in his early 60’s, Gary is likely to have been exposed to the 1970s issues with the Ford Pinto fuel tanks in rear-end collisions and felt it a good idea in light of the 15 gallons on fuel right next to him.

Speaking of bumpers, you’ll also note a steel front bumper in the above pic. That was a “temporary” addition to ensure things went smoothly in inspection for titling. When people ask about T-Bucket registration I always have to say that not only is just about every state different, but you’ll also find differences depending not only on which DMV location you visit but in some cases also who you deal with there and when.

In the pic above, if you look to the left of the nice, rugged step plate mount Gary attached to the frame you’ll see a channel with some lightening holes and that happens to be Gary’s battery box.

And that beautiful red finish didn’t come from the half gallon of paint alone because Gary applied a full gallon of clear to make it shimmer in the sunlight.

As for Chester’s “How to Build a T-Bucket” eBook, Gary said “The book was very helpful. To get the most out of it, though, you have to read through it more than once to get what’s going on in his mind.” And I think that’s great advice.

Gary noted that he just had the state police put the VIN numbers on his title and that his license plates are on the way. He’s “going to take it out Christmas day no matter what the weather!”

Now, that’s what it’s all about. This is just one more example that with planning and determination anyone can build a T-Bucket on a budget to make those dreams come true.