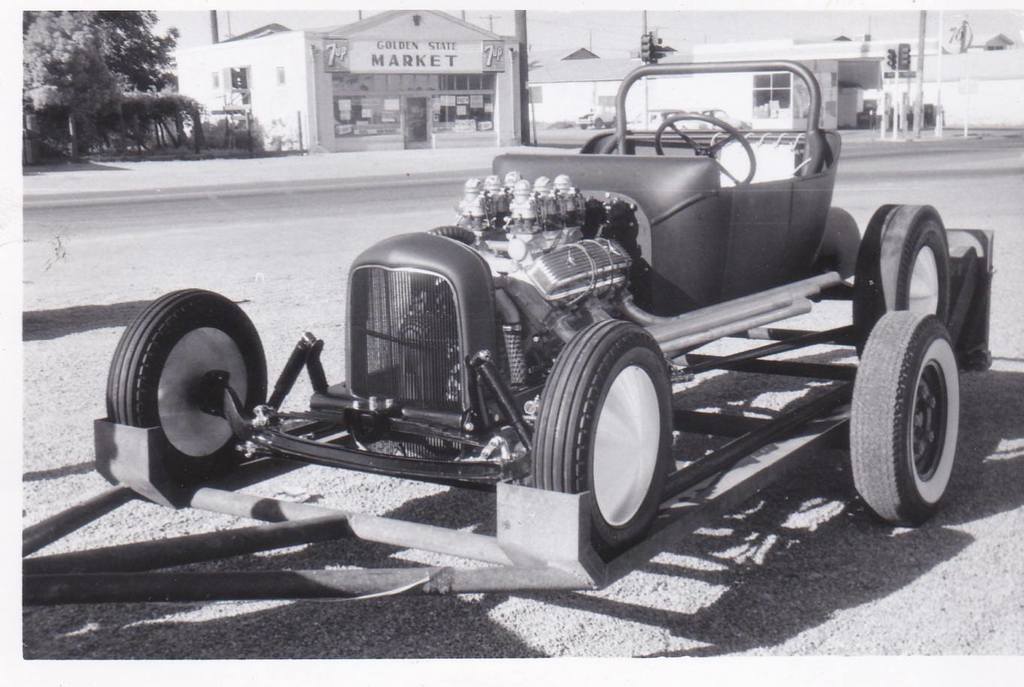 “Local Hanford, CA man built this car in the late 50s. Sold it after a while and then it became famous in someone else hands. Picture was taken two blocks from my shop (Hanford Auto Supply) at Tenth and Lacey in Hanford CA. 76 station in back is still there but is a burger stand now.”

Which leads us to today’s hot rod history lesson: Who or what popularized the concept of chassis lightening holes?

The Geraghty & Crawford T Roadster! Which is what that primered Hanford T-bodied drag roadster became. And it had a huge influence on me as well.

One Fall afternoon after a hard day of sixth grade studies 😉 I made my regular stop at the corner drug store on my way home and was transfixed by the cover of the new Hot Rod magazine on display. It was the most fascinating mechanical marvel I’d ever seen: the Grasshopper Roadster, a beautiful ’23 T body shell and a mass of chrome and matching green hot rod chassis made for both show and go! The Grasshopper Roadster, built by John Geraghty and co-owned by John Crawford was the subject of a 3-page centerspread with photos by Eric Rickman. 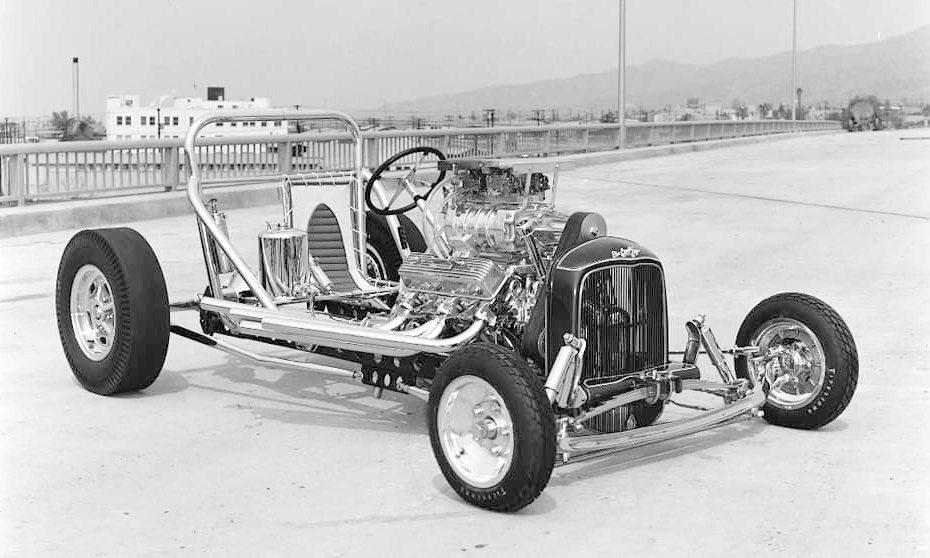 I can confidently say that up until that 1959 national exposure nobody had ever seen a more elegantly beautiful Altered roadster: T or any other body for that matter. The Grasshopper Roadster’s eye-popping green color on the cover was described in the feature as “Creme de Mint” lacquer and the interior rotogravure photos coincidentally had a green tint. (In case you’re not Mad Men-era mixed drink savvy, a Grasshopper cocktail is made with crème de menthe liquer). That issue of Hot Rod became my favorite and I spent untold hours gazing at the Grasshopper Roadster photos and reading about it. Not too long after, I even bought and built the Monogram rip-off model, which they called the Green Hornet, that even used the HRM photos as the inspiration for its box art. 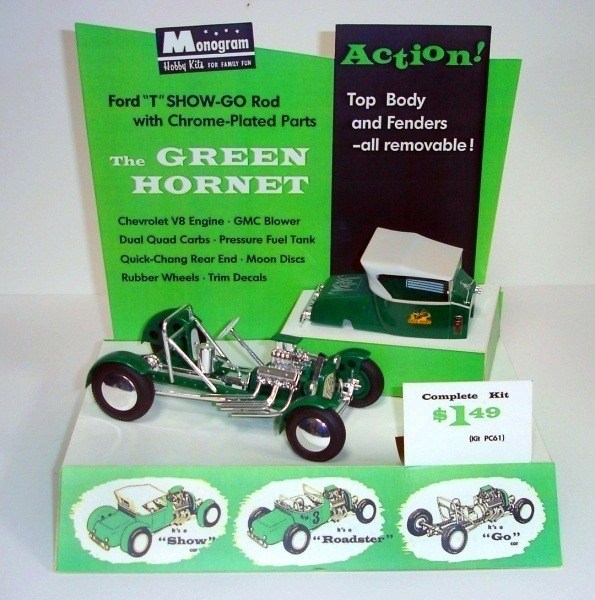 The hobby shop store display was so convincingly cool!

Like others before Ed “Big Daddy” Roth hit the model car world, Geraghty and Crawford received no royalties. Back then not only kids but also car builders didn’t know about licensing deals or royalties To say I was blown away at the 2015 Grand National Roadster Show to see the Grasshopper Roadster reproduction built by Dave Shuten and the crew at Galpin Auto Sports is an understatement. My jaw dropped! Never did I think I would have an opportunity to see this 23 T roadster I so idolized as a youngster up close and personal. The beautiful “hammock” style seat that hung from the Grasshopper’s chromed rollbar was unique and I loved how the body panel pinstriping really made the ’23 T body shape look like a fine sculpture rather than an old sheet metal container. It turns out that the striping and lettering were done by Von Dutch — and they’ve been lovingly recreated in the new Galpin version. The original steel T body had been reinforced with small diameter tubing and ran a traditional turtle deck, under which was a chromed quickchange rear axle that was solid mounted to the frame and also used the chromed rear wishbones for additional axle stability. The Grasshopper Roadster truly was built for both Show and Go. For Show, it used a hollowed-out, fully-chromed ’57 Olds engine with supercharger and dual quad carburetion. For Go, the Olds engine was bored and stroked to 480 inches, with 9 1/2:1 compression and 18 pounds of boost, fed by a big Enderle injector. Unfortunately, the lightened chassis had been originally built for a small block Chevy engine and the massive torque of the big, blown Olds would twist things such that it was never possible to get any kind of traction, especially with the hard tires of the day. The real beauty of the Grasshopper Roadster is evident in the above photo with the nicely designed and striped front crossmember and spring perch, the shock mounts and Deuce grille shell. The nifty little 12 inch Halibrand front mag wheels were complemented by rear Halibrands. Another unique feature which can be seen in the first photo on this story is how the traditional wishbones were not only split at the rear but also mid-way in their length transitioning into radius rods attaching to the front axle.

It’s also very nice to know that the original builder, John Geraghty, thanks to editorial and photographic whiz Eric Geisert was introduced to Dave Shuten and his Grasshopper tribute (I hate to use the word clone — just sounds bad). Unfortunately, John Geraghty passed away a few months after the Roadster Show unveiling. I really have to thank Beau Boeckmann and Galpin Auto Sports for having the respect of and commitment to our hot rodding roots to enable and support the efforts of Dave Shuten and crew to resurrect the Grasshopper Roadster for a new generation of rodders to discover and for the old generation to reminisce.

If, you’re like me and can’t get enough Grasshopper, you’ll certainly enjoy this video walk around.

If you’d like some insight into how the Grasshopper recreation came about at Hollywood Hot Rods, then check out this photo. 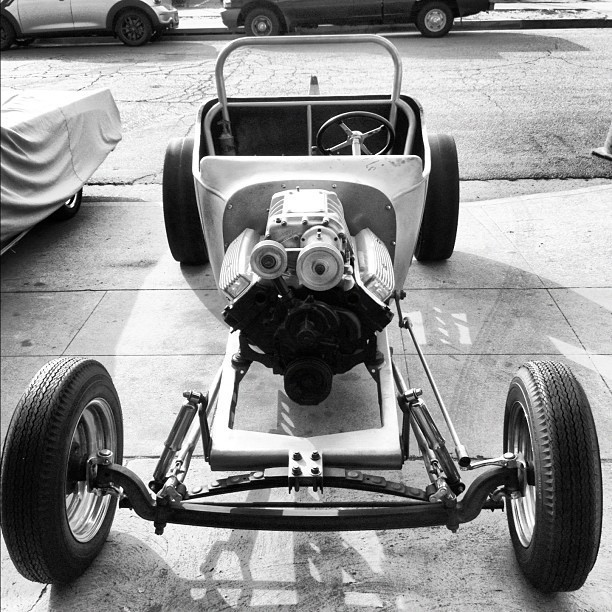 And the following photo from Caprice Photography shows what appears to be the turtle deck reconstruction. 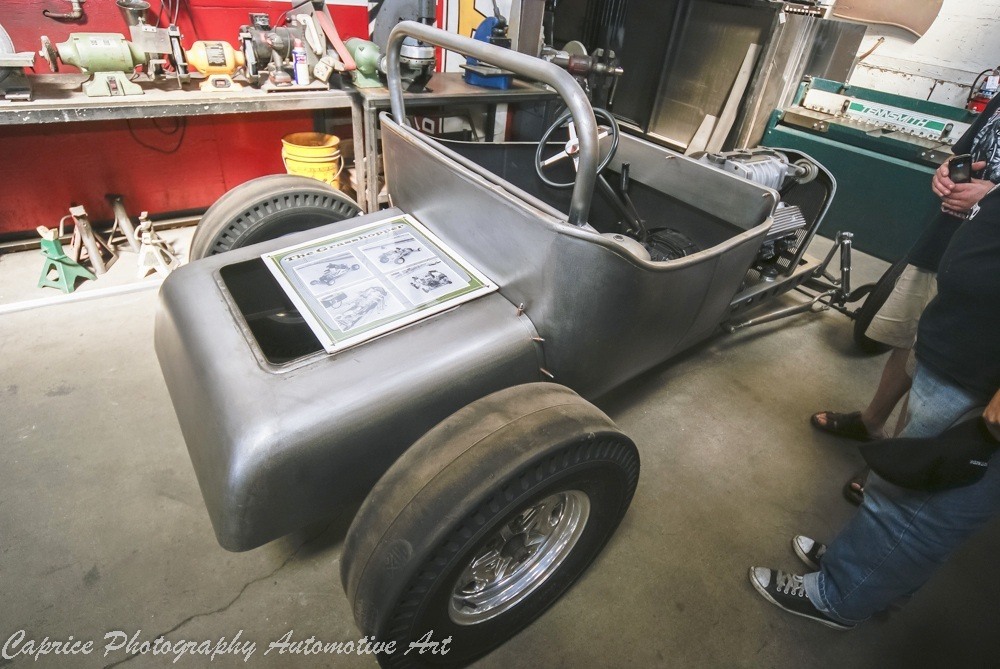 And if you’re like me and just can’t get enough of the cool Grasshopper T you’ll love this new video from Jalopnik. It gets really good at about the 6 minute mark.