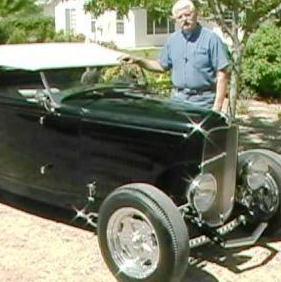 In introducing the 3rd new hot rod building DVD in the StreetRod 101 series on our sister website, www.StreetRodPlans.com, one of our regulars here asked, “who is Bob Hamilton?” So, here goes: Some of you who visit TBucketPlans.com may know Bob from a story we did a while back on How to Stretch a T-Bucket into a Tub-T. Or you may recall the story we did on Bob’s Oakland Roadster Show Winning Track T. Others will know Bob from our multi-part 1927 T-Bucket Roadster Project series. In 1952, on the island of Guam, Bob Hamilton was in the 3rd grade when one of the enlisted men that worked with his Dad brought over a Model A roadster. As Bob recalls, it was channeled, no fenders or hood, probably flathead powered but definitely a stick shift out of the floor (probably a ’39 box). Bob climbed in and the soldier took him for a ride down the mountain, found a wide spot with some gravel – flipped a 180 and nailed it! The hair stood up on Bob’s neck, he got goose bumps up and down his spine, a grin from ear to ear and he was hooked!!!
Hot rods then became Bob Hamilton’s love, passion, and his life. Bob’s had a love affair with hot rods ever since that day! He learned all he could from books, asked questions, and watched others. He helped other guys work on their cars, learned all he could and practiced by building model cars and trucks. When he got older, he joined the Navy Reserve and became an Engineman attending a school in Great Lakes in 1964. After the service he attended college and became a Vocational Shop Instructor, teaching auto-mechanics, auto-body and paint, machine shop, and drafting . He did this for 27 years, retiring in 1999. After retiring, he built a new home and shop and began to fulfill that dream of building hot rods. He now has six Saturdays and one Sunday each week, four weeks a month, twelve months a year – life is good!!! Hot rods are truly a life long passion for Bob – although it can also become a love/hate relationship! It’s in his blood and shows under his fingernails. Bob loves this dream!!! Which brings us to the StreetRod 101 series of incredibly detailed hot rod building DVDs that you can acquire at our sister site, StreetRodPlans.com.

It all started a few years ago when we introduced Bob’s first StreetRod 101 DVD on Frame and Chassis Construction. It met with such enthusiastic success that about 12 months later we introduced the second DVD, StreetRod 101 Fiberglass Body Modifications. Which brought us to when we added the third volume to the StreetRod 101 DVD library, Fiberglass Body Work and Paint, Plus Chassis Prep with Bonus Metal Pickup Bed Fabrication. And most recently to the T-Bucket and Model-A Hot Rod Modifications DVD.

The eBook plans we offer here at TBucketPlans.com are great and the StreetRod 101 DVDs are the perfect complement to them. First you want to get your plans. Then, you’ll want to follow along and see just how an experienced, expert hot rod builder like Bob Hamilton actually puts plans to practice and shows you how to do things easier, how to correct the inevitable mistakes that will occur and, most importantly, how to think through what you’re going to do in advance so that you don’t waste time, money and effort. Check out the detailed contents of all 4 DVDs today at StreetRodPlans.com. So, that’s who Bob Hamilton is and we’re proud to partner with him.

1 thought on “Who is Bob Hamilton of the StreetRod 101 DVD series?”