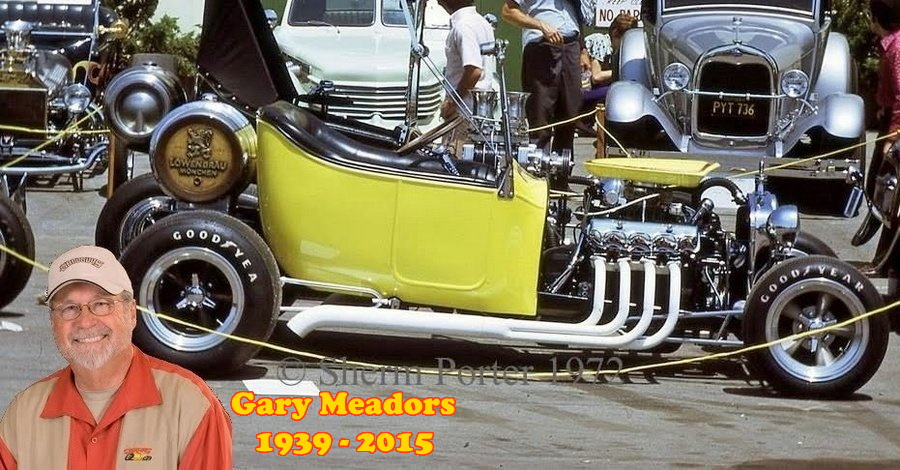 It’s been five years since we lost Goodguys Rod & Custom Association founder Gary Meadors. Gary was inspired by his lifelong love of rods and customs to found an organization that grew to a worldwide membership of more than 70,000. It’s significant to note that one of his early hot rods that was the basis for his first organizational efforts was widely known as Gary Meadors Beer T.

It’s also notable that the photographer of that feature was a young Brian Brennan who noted that Gary Meadors Beer T “taps attention at rod runs throughout the southwest.”

While Gary Meadors built his first hot rod, a 1947 Plymouth, when he was 16, he started his T-Bucket with the purchase of a “roller” someone else had been working on for a year before deciding to move on. It was a natural for any Northern California hot rodder back then to start with an Andy’s Instant T chassis. And the natural accompaniment for that was a Steve Archer fiberglass body. In the photo above you’ll see the distinctive Andy Brizio combination headlight/shock mount. However, when you build a T-Bucket you have unlimited leeway in how you do it and you’ll note that Gary chose the more sleek look of friction shocks fabricated by Pete Weber over the typical hydraulic shocks used on most of Andy’s builds.

A truly distinctive element of the Gary Meadors Beer T, was his choice of a Chrysler polysphere headed V8. Most likely, this one came from a top of the line 1956 Dodge Custom Royal. The standard engine for that car carried the exalted name of the “Super-Powered Super Red Ram.” It was a high deck poly with 315 cubic inches, a 4 barrel WCFB carb and dual exhausts, rated 230 horsepower.

The only real modifications to what was then a pretty hot engine were the nicely flowing Pete Weber built white VHT coated headers and a 600 cfm Holley replacing the WCFB. Gary’s intent in building the Beer T was long distance cruising to rod runs all over. However, in the lightweight T-Bucket with an automatic transmission he was still able to turn a 13.90 e.t. in the quarter at 100 mph.

The interior of Gary Meadors Beer T featured a wood dash panel with a nice array of Stewart-Warner gauges and a wood-rimmed Grant steering wheel atop the 45 degree steering column leading to a Corvair steering box. What’s unique interior-wise is the pushbutton shift console actuating the ’56 Dodge PowerFlite automatic transmission. You’ll also note the hand-operated parking brake which did previous duty in an import and is a necessity with the PowerFlite tranny because they didn’t have a “Park” function.

Which brings us to the naming of Gary Meadors Beer T. But first, about beer keg fuel tanks.

To my mind, one of the first relatively widely seen aluminum beer kegs reworked as a fuel tank was on the bobtail T-Bucket of Early Times car club charter member, Don Mabe. Back in the day, beer kegs could often be scrounged for nothing (i.e., laying on the lawn of a fraternity house), held about 15 gallons, and the aluminum could be polished up to look quite nice. It was a perfect accompaniment for a bobtail T-Bucket.

Gary Meadors Beer T used a Lowenbrau keg for a bit of prestige. This was in the early 1970s when it was actually imported from Germany. By 1975 Miller acquired the rights to Lowenbrau and began producing it in the U.S. with an Americanized recipe. Gary went all-in on the Beer T theme, sporting vanity plates with the Beer T name. Hey, he probably would have had a tapper shift arm, but those PowerFlite pushbuttons are just too cool.

And it’s probably not too surprising to learn that the rear axle is from a ’56 Dodge, with 3.10 gears. Somebody’s wrecked 1956 Dodge Custom Royal was quite a donor. The coil springs, Monroe tube shocks and panhard bar were standard Andy’s Instant T fare, based on the original Pete Ogden chassis design.

Gary’s Beer T was built to such a level of perfection that in 1971 it was one of a select group of cars to gain entry in the 23rd Oakland National Roadster Show.

In Gary’s book, Goodguys Hot Rod Chronicles, he tells about driving down to Ontario Motor Speedway with his pal Pete Choquette in 1970 for the inaugural running of Indy Cars there. “Somehow” they found their way onto the track and were able to pose for this photo with the Beer T at the base of the scoring pylon. Gary said, “Right after we took it, we set off around the track and nearly made it one time before we were diverted out the gate by security who told us to ‘just keep going.'”

In the hot rod world, however, things are always subject to change and it wasn’t long after its Rod Action feature that Gary Meadors Beer T did change.

When the L.A. Roadsters 1972 show at the Great Western Expo Center rolled around Gary Meadors Beer T had a new look, as captured by automotive photographer Sherm Porter. Most notably, it was now a striking yellow with a new shark style carb scoop somewhat similar to the injector scoop on the Greer, Black, Prudhomme dragster.

You’ll also note from the Bruce Olson photo above that Gary had added tri-bar knockoff spinners to the American mags. That was a popular item at that time.

The wooden looking Lowenbrau barrelheads that are visible in some photos of the Beer T, I believe are advertising signs. They do, in fact, make the keg much cooler looking than the plain aluminum barrelhead. The fact that they were for the more exotic Lowenbrau import made them all the more cool.

Bruce Olson’s rear shot at the GNRS shows that Gary also went with some much wider Goodyears on the back of his T.

The Beer T was also captured in another great Bruce Olson shot at a Northern California car show at the Fremont Hub Shopping Mall.

Of course, it was only natural for Gary to be a participant at the annual Andy’s Picnic’s organized by Andy Brizio, which also was a very convenient way of showing off the many fine Andy’s Instant T’s.

It was around this time that Gary Meadors, through the Nor-Cal Early Iron Car Club that he helped form earlier, organized the first “Street Rod Mini Nationals” at the Lodi Grape Festival Grounds. He’d already participated in many rod runs and shows and had a good idea what appealed to street rodders. When more than 500 hot rods participated in that event it helped Gary see that there could be a future in promoting such events.

Ten years later, after a stint as a regional event director for the National Street Rod Association, Gary struck out on his own and started the Goodguys Rod and Custom Association. The first Goodguys event was staged in 1983 in Pleasanton, California at the Alameda County Fairgrounds and the rest, as they say, was history.

To me, the story of how Gary Meadors love of hot rodding was able to be leveraged to the benefit of tens of thousands of street rodding enthusiasts around the world is very inspiring. The fact that a modest T-Bucket hot rod he built played a significant role in that coming about makes the story even sweeter. Five years after Gary’s passing, it’s a story worth reflecting on and drawing your own personal inspiration.