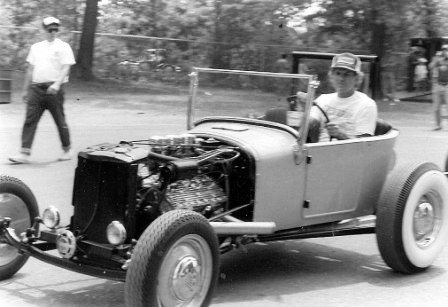 I’m reposting this past Don Garlits story, because after visiting the Don Garlits Museum of Drag Racing and interviewing Big Daddy that interview was the subject of Episode 5 of our Hooked on T-Bucket Hot Rods Podcast.

Seven years ago I did a short piece on how a T-Bucket became the foundation for “Big Daddy” Don Garlits first dragster and his eventual drag racing success, winning 17 World Championships, and 144 national events.

A couple years ago, I attended the 62nd Annual World Series of Drag Racing at Cordova International Raceway, 150 miles west of Chicago on the Mississippi River. This is the oldest continually running major drag racing event, predating the NHRA US Nationals by two years. That’s significant because it was the weekend before Labor Day in 1957 at Cordova that 25-year-old Don Garlits twice defeated the renowned Cook & Bedwell San Diego-based dragster that was known nationally as the fastest in the land, having broken the magic 160 mph mark. That accomplishment was such a shock that the Drag News cover read “Unknown beats World Champion.” So, with Don returning to Cordova to “cackle” a Swamp Rat it was a great opportunity for me to go see him in person and get a signed copy of his auto biography (pun intended) Don Garlits and His Cars which I highly recommend. If you’re a drag racing history fan it’s some of the most fascinating reading you can find. This book literally covers just about every car Don owned or built that was in competition. The stories about how things got done in the early days of drag racing are both informative and entertaining. Plus, the book proceeds help support the incredible Don Garlits’ Museum of Drag Racing in Ocala, Florida that’s a must-see.

This opportunity to see Don at the legendary strip that helped springboard his career inspired me to do this update of my earlier story about his flathead-powered 1927 T-Bucket.

In the early 50s a young Don Garlits was frustrated that his 1950 Ford daily driver couldn’t beat local Florida drag racer, “King” Charles Hogan and his brutish V-12 Lincoln powered roadster. Don also had the desire to win those big Top Eliminator trophies at local drag races. In his need for speed, Don swapped the hot flathead out of the ’50 Ford into a lighter, fenderless 1936 Ford coupe. But he still wasn’t satisfied.

Don decided to build a T roadster because that’s what the guys in California chose as the ultimate lightweight speedster. A used car lot owner friend of Don’s had a ’27 T roadster project that just wasn’t coming together like the California hot rod T’s and in frustration sold his pile of parts to Don for $50. Don then built it into a drag racing modified roadster under a tree in his yard — a true shade-tree mechanic! Built on a short, 89 inch wheelbase, the little ’27 T was significantly lighter than the 1936 Ford coupe it replaced. Don swapped the hot 276 cubic inch Mercury engine out of his 1936 Ford into the T and, true to form, upgraded it further with an even hotter new cam and mushroom lifters. With a nod to safety, Don fabricated a square roll bar. It was more function than form and back then, like most hot rodders, Don made it with what he had. But, the high 13s Don’s original version of the T-Bucket turned weren’t quick enough to let him beat King Charles’, who was running low 13s. Tire spin was Don’s problem since all they had available back then were 6 inch recap slicks and they couldn’t handle the powerful flathead Don was running. Remembering his high school physics, Don lengthened the T’s wheelbase by over two feet to 115 inches by extending the front of the frame. This significantly altered the T’s weight distribution rearward for better traction and Don was immediately successful in conquering the King of local drag racing. “It had been a few years since I first saw King Hogan beating all comers back on Hillsborough Avenue, but now I had outrun him. I’ll never forget it,” said Garlits. Unfortunately, no photos seem to exist of the extended wheelbase ’27 T because it wasn’t long before it became the basis for Don Garlits first dragster.

Don’s extended wheelbase T-Bucket successfully captured local Top Eliminator trophies for Don, but he wanted a bigger challenge. It came when the NHRA announced that in 1955 they would hold their first Southeastern Regional Championship meet in Florida. To become Top Eliminator at such a prestigious regional competition became Don’s new goal. He knew he’d have to up his game. The T-Bucket modified roadster just wouldn’t be enough to win the Southeastern Champion title he was after.

Don had also learned about Mickey Thompson’s revolutionary “slingshot” dragster design that was introduced in 1954. Time was short and money was tight so Don removed the ’27 T body, moved the engine back as far as it could go and hung his driver’s seat out behind the rear axle — all on the lengthened T frame.

Don Garlits first dragster would be the 12.1 second, 108 mph early slingshot with which Big Daddy would win the first NHRA race he entered when the NHRA Safety Safari came to Lake City, Florida for the Southeastern Championship. Three short years later, he would become a professional drag racer. Not long after becoming Southeastern Champion Don discovered the awesome power potential of the Chrysler hemi and swapped the flathead in his stretched T-Bucket chassis for a brute of a Chrysler 354 cubic inch Hemi. He was able to run 125 MPH in 10.8 seconds with that setup. But when flat towing his dragster home over the rough concrete roads the much heavier weight of the Hemi bent the flimsy Model T frame rails. That’s what gave rise to replacing them with 1931 Chevy rails and then becoming the famous “Swamp Rat 1”. 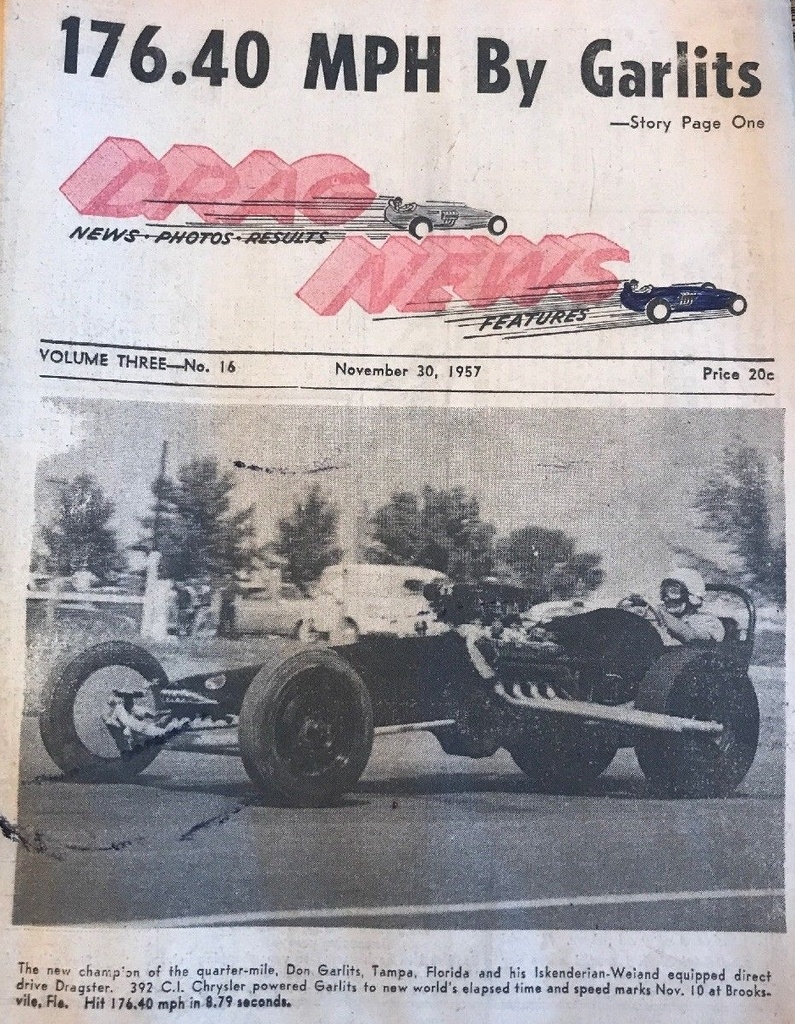 Just a few short years later, the evolution of Don’s dragster had upped the speed by over 50 MPH and cut the e.t. by two seconds.

It was his successful, formative T-Bucket roadster, though, that would give Don the beginnings of his first rail job dragster. His idea of lengthening the frame to improve traction was something he exploited throughout his drag racing career until 1987 when the NHRA initiated a new rule to limit the Top Fuel wheelbase to 300 inches.

Don ended up selling the 1927 T body and the frame ended up on the scrap pile after giving way to the heft of the Chrysler Hemi. Fortunately, many years later Don found the original body while scouting other parts in the mountains of North Georgia. He brought it back to Ocala and rebuilt it with a fresh, short wheelbase Model T frame and you can now see it up close and personal when you visit the museum.

Here’s how the text reads in the museum plaque:

Don and Pat built the “T”, their first “Real” race car, under an oak tree at their home in North Tampa in 1954. An electric welder and gas torch modified an old 1927 Ford Model “T” Roadster to accept a 1948 Mercury Block, ’39 Ford floor shift transmission, and a ’48 Ford rear (a very common method of building a “Hot Rod” in the early 50’s). The “T” was sold in 1956 but during a 1986 parts search in North Georgia Don accidentally found the old “T” rusting away in a junk yard. He purchased it and personally did the restorations, completed in 1988, and taken on tour with Swamp Rat I. This “Hot Rod” represents the latest “state of the art” in drag racing in Florida during the 1954 period.

For the following terrific photograph, we owe thanks to legendary hot rod author and photographer Albert Drake and Flat Out Press:

On Albert’s fascinating blog, he recalls walking around the corner of a building at the 1989 Nostalgia Nationals and quickly catching this great pic of “Big Daddy” rumbling by in the clone of his original T-Bucket.

To me, this is a great example of how the versatility of the light weight T bodies played such an important role in developing our hot rod sport. Don Garlits first dragster is about as notable as things get in the hot rod world and for a little T-Bucket to have been instrumental in its coming about is truly significant.

P.S. It’s interesting to note that Don’s car lot friend who sold him the T got it from California. Don said that in the early 50s you just didn’t see Model T roadster bodies like that in Florida since they’d likely all been melted down the decade before to support the War effort.

(Special Thanks to Richard D for the Don Garlits Museum of Drag Racing pics!)

But hearing the story straight from Big Daddy himself is fascinating! So be sure to listen to Episode 5 of our Hooked on T-Bucket Hot Rods Podcast.

So, if you haven’t checked out our new “Hooked on T-Bucket Hot Rods” podcast yet, jump on over to TBucketPodcast.com.

You’ll find our podcast episodes published there where you can listen to them online. We’ve also included some handy how-to information that will enable you to subscribe to our free podcast using your smart phone, tablet or PC. Hey, it’s all just one more way for us to share the T-Bucket passion and help others discover the fun of T-Bucket hot rods.