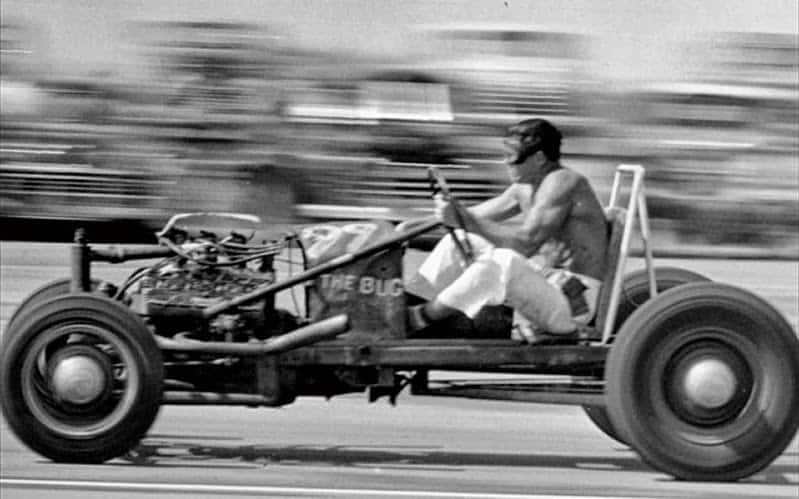 “Some dang fool gave me a Model T roadster when I was 14 years old and ruined my whole cotton-pickin’ life.” – Dick Kraft

And thus begins the story of the first rail dragster …

It was 70 years ago today on Sunday, July 30, 1950 that Dick Kraft showed up at the early Santa Ana, California drag strip with just a 1927 Model T cowl on a stripped down Model T frame with a flathead Ford V8. “The Bug”, generally considered to be the first rail dragster races for the first time.

It began in 1935 when Dick Kraft of Anaheim, California began his speed-possessed hot rod pioneering endeavors, first with that 4 cylinder Model T roadster and then a Model A. It wasn’t long before Dick realized the fast guys were running V8 ’32 Fords and he quickly became one of them.

Dick ran the ’32 one time at the dry lakes and turned 98 mph. Realizing early on that winning was a function of both high horsepower and low weight, Dick wasted no time transplanting that early Ford V8 into a much lighter Model T roadster and by 1941 he was turning 121 mph at Muroc Dry Lake when most others in their heavier roadsters were straining to top 100 mph.

Which brings us to 1950 when the Santa Ana Drags opened on June 19 as the first drag strip in the United States and ran on the auxiliary runway at the Orange County Airport.

It was an immediate hit and with more coupes, sedans and roadsters, along with a few motorcycles, matching off against each other each week it was a shock on Sunday, July 30, 1950 when Dick Kraft showed up as Dick Martin noted, “with a contraption that consisted of four wheels, a motor, and a seat.” The debut of the first rail dragster.

Previously, in its stripped-down four-banger form it had served as a weed and insecticide sprayer in the orange grove on Dick’s parents’ farm. It was not unusual at all back then to convert cheap, durable stripped down Ford Model T’s as all kinds of farm implements. Dick simply repurposed the weed killer tank as the fuel tank that he rode next to.

Initially, the first rail dragster caused concern because Dick was all out in the open and it had no roll bar. He was told to add one and he did, but when the strip officials realized it was thin-wall electrical conduit that could be bent by hand he was directed to replace it, which he did with 3/4″ galvanized pipe.

But, Dick was sure successful in ditching unnecessary weight. With no front brakes, no body, a seat made from two pieces of wood and initially no roll bar it weighed but 1200 pounds.

And coming from his parents’ orange grove The Bug sported Montgomery Ward Riverside DeLuxe tractor tires with a maximum speed rating of 35 mph, on a car that consistently ran over 100 mph in the quarter.

Of course, there was no radiator: Just a couple of tubes took its place to circulate water.

Initially, Dick Kraft ran a 296 cubic inch flathead and with the only weight on the rear end being Dick it smoked the tires like crazy. To cure that, he downsized to just 268 cubic inches, but still with Evans high compression heads, a Winfield full-race cam and three Stromberg 97’s taking in up to 30% nitro, pressurized in the former herbicide tank.

Not long after that 1950 season, Dick sold The Bug, supposedly for crazy money, but a couple of recreations have been built. I’ve been fortunate to see them both. One is in the NHRA Museum in Pomona, California.

The other Bug is in the Don Garlits Museum in Ocala, Florida. Where else would you have the first rail dragster?

But don’t let the stark functionality of The Bug leave the impression that Dick Kraft only built hack jobs.

Far from it! He went on to build one of the finest looking track roadster T’s every built. But that’s not all.

Dick Kraft followed that up with one of the most beautiful and well-executed Frank Kurtis Indianapolis 500 roadster inspired street rods ever built.

And we’re only scratching the surface of the memorable life of Dick Kraft. But, as T-Bucket hot rod fans he’ll always be remembered as the guy who made the first rail dragster from the remains of a Model T roadster used as a weed sprayer on his parents’ farm.

Enjoy this little video of Dick Kraft on one of the recreations of his legendary Bug.