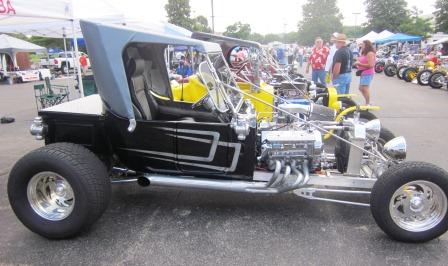 How about an all-aluminum T-Bucket as one more reason to attend the 2017 NTBA T Bucket Nationals, June 22-24, 2017, in Carson City, Nevada, here’s a nice visual reminder of just one of the cool T-Buckets that will be there. Bill Darr will be making the trip from Artesia, New Mexico. His T-Bucket is chock-full of originality in aluminum. Here’s what it looked like at the NTBA T Bucket Nationals in 2011. Come on out to Carson City to see how it looks today. As a former president of the National T-Bucket Alliance, it’s only fitting that Bill “Weelstang” Darr had one of the more distinctive T-Buckets at the 2011 Nationals in the form of his “Alum-a-T”, a virtually all-aluminum T roadster. As Bill would describe it, the only things not aluminum are the fiberglass body, window glass and tires. For some time, Bill had wanted to build an aluminum chassis hot rod and after selling his BBC-powered T-Bucket he started moving full-speed ahead. The new bucket features an all aluminum frame, crossmembers and brackets. The front axle is an aluminum dropped Super Bell which is located with aluminum radius rods, the “hairpin” part of which has been machined from aluminum billet. The big headlights are mounted on similarly large aluminum fabricated headlight stands. Powering the lightweight wonder, of course, is an aluminum 4.6 Liter Ford DOHC engine. The windshield stay rods, as well as the windshield frame and the wind wing frames are similarly constructed from aluminum. The radius rods are distinctively one of a kind and the headers on the Ford mill are similarly distinctively different from any commercially available. I’m a fan of the clean look of the tie rod traveling between that radius rods and that’s what Bill has going on here. From the driver’s side, you’ll note the aluminum drag link which is connected to an aluminum steering box. You’re probably not going to be surprised by a billet aluminum dash panel. Of course, Bill fabricated a rear end that’s strikingly unique in its appearance and construction. Based on a Champ car quick change center section, Bill constructed his own trailing arms and outboards for the independent rear suspension, which uses Jaguar XJ40 axles. While you can’t see it, another unique feature of this T is an 18 gallon fuel tank, which is almost twice the capacity found with the majority of T-Buckets. We know you’ll want to see more “up close and personal” of Bill Darr’s Alum-a-T, so we have a nice 2 min. 53 sec. video waiting for you.

We look forward to seeing you June 22-24, 2017 for the NTBA T Bucket Nationals in scenic Carson City, Nevada.