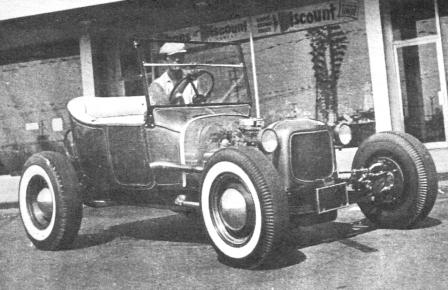 A few months ago, I posted a brief tribute slide show to the Tweedy Pie T-Bucket, which was built in the 1950s by Bob Johnston, gained its own recognition as a magazine cover car and then rocketed to T-Bucket superstardom after it was sold to Ed “Big Daddy” Roth. (I recently updated and converted the slide show on that post to a video). You see, in 1959 I was 11 years old, had been bitten hard by the hot rod bug and was purchasing every car magazine at the corner drug store my meager allowance would allow. When the December ’59 Rodding and Re-styling hit I fell in love with the cover car: Tweedy Pie.

To me, if the term “runabout” were applied to a car it would be this one. With its short wheelbase, stubby bobtail appearance, and performance engine exposed to the world this was a car that seemed to say, “Hop in and drive me around.” It wasn’t as sinister nor complex looking as Norm Grabowski’s Kookie Kar and didn’t appear as much like an all out race car as TV Tommy Ivo’s T-Bucket. I was fascinated by every aspect of this T-Bucket. The fact that it appeared on the cover of the magazine with a flathead mill and on the inside pages with an OHV Chevy just added to the attraction. We know from Big Daddy and Tony Thacker’s book that Ed was good friends with Bob and had long admired his very clean T-Bucket. The royalties from sales of Outlaw/Excaliber model car kits by Revell allowed Ed to purchase Tweedy Pie from Bob in 1962 for a reported price of $1150. Then, things started to get very interesting in terms of this clean little T-Bucket. Ed added some tasteful quad headlights, chrome reversed rims, nerf bars, more chassis chrome, but not a whole lot more and it then became an incredibly successful Revell model car kit, supposedly selling 3.5 million models the first year and overall over 10 million (remember, this was in a pre-video game era, where model car building was one of the few passive hobbies available to kids beyond reading and watching TV). Like all his cars, Roth decided to sell Tweedy Pie not long after making the changes, for $2300! When I was reactivating my T-Bucket interests around 2001, try as I might there were few if any good Tweedy Pie photos to be found on the web. Then, at the 2005 Rock ‘n Rods on Route 66 car show in Pontiac, Illinois, I was dumbstruck to walk into the special Roth display and see Tweedy Pie in person, albeit still sporting the Chris Lovoy exhaust system, aftermarket steering wheel and lavender upholstery. Turns out Tweedy had subsequently been purchased by Illinoisian, Larry Tarantolo. The next thing I heard about Tweedy was that it was sold at the Russo & Steele January, 2007 auction for $335,500! Say what? Compared to Bob Johnston’s $1150 sale to Roth, that’s an over 29,000% increase!! (I have a theory on this, but will save it for a rant on another day).

Anyway, more recently Tweedy Pie went on the block again at the Mecum 2010 Monterey auction and was a “no sale” because the high bid of $200k didn’t meet the reserve.

Plus, for another update on the sale of Tweedy, click here>