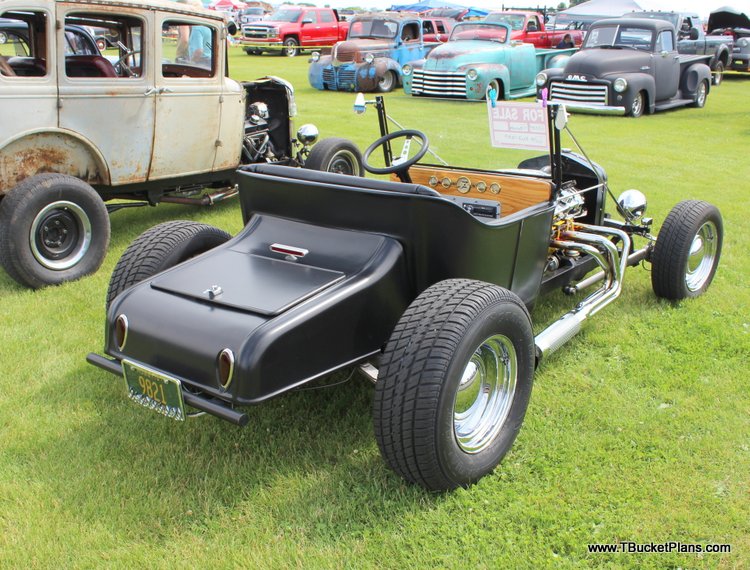 Back in 2010 I did a story with a video about a nice little budget build T-Bucket that I admired. It was tastefully done and a cool example of a turtle deck T-Bucket, which in itself is fairly unique nowadays, with traditional touches. Yesterday, I was at the Scrap Drive car show in Belvidere, Illinois and saw it again and it’s now for sale. So, I’m taking this opportunity to post a few updated photos of this sweet little budget build T-Bucket. And after the updated photos and for sale info I’m reposting the original story from 2010. In the half dozen years that have passed the little T still looks great and it appears only a few minor changes have been made. The most notable change seems to be that the interior has been freshened up. The bugs in the radiator are evidence that it’s a driver and this’ll make a really fun ride for someone. I don’t know the owner but I’m happy to post the contact info because I enjoyed seeing this T again. It’s a great example of how a budget build T-Bucket can be a unique, good-looking ride without breaking the bank. What follows is the original December 12, 2010, post on this T. TBucketPlans.com is all about T-Buckets — especially those built on a budget! So, whenever we encounter a cool looking T-Bucket built on a budget we’ll try to highlight it so that perhaps you’ll pick up some new ideas or inspiration in your own build. On the subject of budget building T-Buckets, though, we hope you’ll take the opportunity to download Chester Greenhalgh’s How to Build a T-Bucket Roadster for Under $3000. After all, where else are you going to get 250+ pages, 400+ photos, templates, diagrams and illustrations revealing every detail of how to easily build a T-Bucket roadster from everyday materials and junkyard parts for only $18.99? A couple summers ago, I encountered this nice little T-Bucket done up in basic flat black at the Sycamore, Illinois “Turning Back Time” annual car show, which is pretty cool in itself when a small town blocks off all the downtown main streets and they fill up with close to a thousand hot rods, customs and special interest cars. It’s very much a Midwestern version of the El Segundo Main Street Car Show in California. In the video, you’ll see that this turtle deck T-Bucket takes the traditional budget approach by using a 1940s era Ford I-beam front axle with the spring in front and positioned with traditional split wishbones. More ingenious budget building can be found in the combination headlight, parking light, hydraulic front shock brackets. Check out the windshield view and you’ll notice some innovative home-brewed windshield frame support stanchions. And, at 2 minutes and 15 seconds into the video if you look closely at the T-Bucket fiberglass body behind the seat back you’ll see a nice example of Chester Greenhalgh’s body wooding technique as described in his “how to” ebook — strong enough to sit on the back of the body. You’ll also notice the tall front spring perch that keeps the ride low despite the stock height spring, the disc brake conversion and the 60s look ladder bars locating the transverse sprung rear axle. And, you just can’t miss with chrome reverse wheels and baby moon caps. The clean, simple black vinyl interior is nicely complemented by the owner fabricated wood dash panel and bringing up the rear is a simple nerf bar and ’39 Chevy taillights.

Overall, a perfect example of how you can build a beauty of a bucket without a big budget! So, if you’re ready to start building your own version: