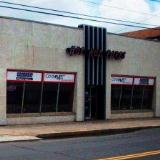 Just received word that Wintec Fabrication / Cool-Flex has moved into an expanded 6,000 sq.ft. facility one mile north on the same street in Wallingford, CT. Now, hot rodders interested in the stretched T-Bucket Wintec Roadster kit will find a larger all glass showroom with even more cars and parts on display, plus a large off street parking area. After residing in the former home of Total Performance, Wintec Fabrication is now located in the center of the town of Wallingford at 65 North Colony Street (Route 5). With the new, expanded facility I’ll have to think about doing another “Shop Stop” when I’m up that way again.

We’ve gotten a lot of positive response from visitors here about the Wintec Roadster, especially from our “Before and After” story and it sounds like the new Wintec home, which was formerly a car dealership back in the day, will be an ideal setting for T-Bucket fans to see their kits and parts up close and personal. As coincidence would have it, the old Wintec facility is turning into a Fiat dealership. What goes around, comes around.

So, if you’re up that way and happen to stop in be sure to tell owner Jim Wilkos you read about them here at TBucketPlans.com.