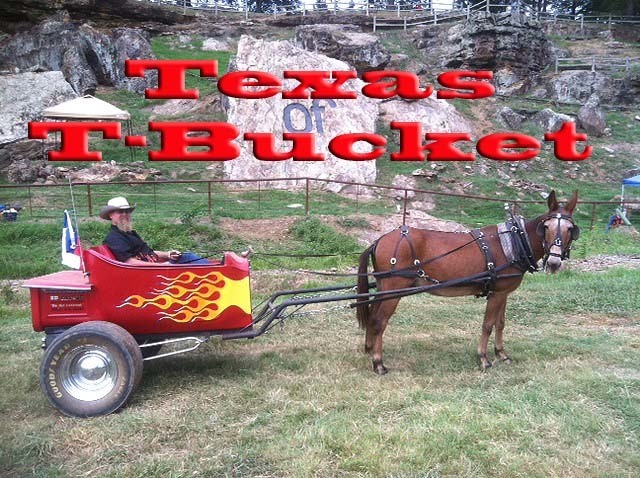 I am continually fascinated by the creativity that can be applied in building a T-Bucket. But, Brett Putman caught me completely off guard when he shared a photo of his Texas T-Bucket, The “Mulester”. It may be slightly less than one horsepower, but put it in a parade and “If they had a people’s choice award, we would win every time!!”, said Brett. “I have been a hot rod nut since high school,” Brett said. “We didn’t live in the city, my parents would drive hours to get me to a car show. After I grew up, my buddies and I continued riding horses and wagons at any trail ride we could get to. With a couple beers, around a campfire, and two of my buddies, this is what we came up with. I had a wrecked ’57 Chevy I had turned into a love seat. They wanted to use it, but I told them I couldn’t do it. I had another idea though. The next week, I drug out all my hot rod pics from high school, and they agreed the T-bucket was our build. So I started gathering parts.” As Brett relates, “This is it. Its not like anything else we have seen. I still need to finish or correct a few things, but it’s a never-ending challenge, as to what else can be done on it.
After a few trail rides, I found my soul mate. Buddies were kicked to the curb. Got married, not another woman has ridden in the T. Now the bucket is in the garage, and my wife and I hit any parade, trail ride or chuck wagon race we can get to. I still see my buds there.”

But to me, this is what it’s all about because Brett said, “So thanks for helping me build a ‘campfire dream’ and find my Soul Mate! This is a TRUE TEXAS T-BUCKET, the ‘Mulester’.” In the drivers seat above is Brett’s best friend Darrin Gowin and his daughter. Darrin helped Brett build it, but he gets extra special credit because he trained the mule, appropriately named, Bumperjack. So, if you’re a fellow Texan looking for some fun you can catch Brett, Darrin, Bumperjack and the Mulester at the Fort Worth Stock Show All Western Parade this coming January 19, 2013 at 11:00AM. Give ’em a big hand from us and all the other T-Bucket fans!