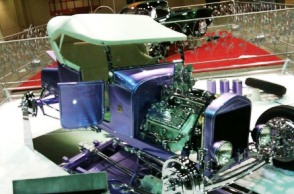 As noted in Part 1 of our story, Hot Rods by Freund’s Russ Freund built an America’s Most Beautiful Roadster award-contending T-Bucket in his Post Falls, Idaho two-car garage. As a lifelong Model T lover, one of the body parts Russ had on hand when he purchased the two roadster quarter panels to begin this project was a T Touring firewall. Unlike 99% of T-Bucket builds, Russ chose to stay with the stock T firewall rather than some form of flat sheet replacement. He wanted the firewall to retain its distinct look, yet be clean and uncluttered. That’s where some real ingenuity comes into play. To keep the engine-facing firewall void of any unnecessary attachments, cables, etc. and the holes that go along with them, Russ constructed a sub-firewall as shown in the photo above. You should note, however, that this view is of the passenger compartment-facing side of the sub-firewall. If you’re a student of early hot rods, you’ll know that great T roadster builders of the past, such as Marty Hollmann, took pains to carefully position the car’s electrical components on the inside and connected them with meticulously dressed, yet exposed to view, wiring that made any casual observer, or car show judge, take notice that the builder had a well-defined plan and knew what he was doing. The photo above shows the sub-firewall turned over so that you see the side which is hidden from view. Those carefully laced wires can then be routed down where they are out of view. While we’re looking at Russ’s unique firewall treatment, this presents a perfect introduction to where the name, The Takeout T, came from.

You see, Russ is a member of a very active, fun-loving Spokane area car club, Thee Inland Emporers, and one of their logos happens to look like a T hot rod in the shape of a Chinese food “to go” carton. And that’s where “The Takeout T” name comes from. You’ll note the Takeout T logo applied to the voltage regulator cover above. The voltage regulator, as you’ve no doubt noticed by now, is prominently positioned in the middle of the firewall. It’s interesting to note in this view that to the right of the sprint car steering assembly is a white box that was the original Model T coil box and which now hides the battery. “I tried to use as many of the original Model T pieces as I could,” said Russ. In keeping with that, the coil box switch is now used to turn the car’s electrical system off and on. As proof that this is truly a garage-built hot rod, we offer the above pic of the frame being prepped for paint. And now you’ll see the painting is underway on the frame and the axle housings in Russ’s garage, where the flamed cabinet doors shown in earlier photos are visible behind the plastic sheeting hung up to protect them. This view of the chromed brake and clutch pedal assembly brings up another very interesting point about this build: it was not done on an unlimited budget. “Early on, I started making regular monthly visits to my chrome plater,” said Russ, “because I realized I could only budget a few hundred bucks at a time. Much credit goes to Billy Payne, who did much of the polishing. I even started doing more of the plating prep work myself to make it more economical.” Russ was also restrained and tasteful in his chroming choices. Chrome was used for contrast and emphasis and the rear axle’s perfect blend of paint and plating is one example. I’ve been a fan of pristine white engine blocks going back to my early infatuation with the TV Tommy Ivo T-Bucket. As with all the elements on Russ’s car, no detail was overlooked when it came time to smooth and paint the now hygienic looking Ford flathead V8. When it came to the intake manifold for the Dave Swenson built flathead, Russ stood by his credo of traditional and tasteful with a simple dual 97 approach. With its purple paint, chrome and the wide whitewalls, complemented by the engine block and white pinstriping, it’s a real beauty just in its roller form. Speaking of pinstripes, I absolutely loved the white pinstripes on Russ’s earlier green Mantis T Touring and was happy to see them on The Takeout T. But, I was absolutely shocked to learn how these perfect pinstripes came about. “Those pinstripes were spray painted on,” said Russ. “They weren’t touched by a brush — it’s all done with tape.” After picking myself up off the floor, he explained that the entire car was painted white and then the pinstripes were carefully formed using 1/8 inch masking tape! Hot rod artist, Jeff Allison, of Almost-Cool.com gets credit for the more complex designs, like this one on the underside of the car. Jeff was also behind those cool pinstripes on Russ’s Mantis that caught my attention a few years ago. Of course, the entire car body was painted upside down as well. “We had three of us working seven hours each just laying out the pinstripes,” said Russ. Maybe I shouldn’t be too surprised that to achieve such a high level of perfection in a garage and on a budget takes lots of innovative thinking, skills and patience. I told you this would be a good one, so we hope you’ll continue on to Part 3 of our story on the unveiling of Russ Freund’s incredible hot rod, The Takeout T.