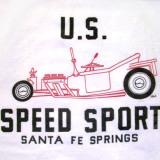 Hot rodder Ted McMullen made his pioneering imprint on the T-bucket world in a short time span. Prior to 1963, T-buckets were individually designed and constructed vehicles. Starting with Grabowski and Ivo in the 50s, they were constructed from steel T-bucket bodies. Fiberglass T-buckets, although introduced in 1957, were only starting to take off in the early 60s. T-bucket frame technology ran the gamut from flimsy Model-T frames, to Model-A frames and even deuce frames, as in the case of the Johnston/Roth Tweedy Pie. Purely home brewed frames came in steel channel, round or rectangular tube variations and almost no two were the same.

That all changed with Ted McMullen’s vision of a rudimentary “production” T-bucket where jig-built frames would be offered as a package with fiberglass bodies. The purchaser could either purchase standard suspension elements or add his own and the engine choice was wide open. Ted established U.S. Speed Sport in Santa Fe Springs, CA in 1963 and by August the barely one year old Popular Hot Rodding magazine covered Ted’s new concept and called it an “Instant Hot Rod” a moniker that evolved into the “Instant T” name. 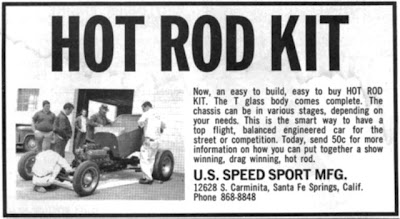 The Instant-T generated tremendous interest and U.S. Speed Sport sold everything from kits to complete T-buckets, but owing to that old nemesis of bad business partner situations Ted had sold and left the business by 1965 and it closed not too long afterward. You can learn more about all the details at a very nice web site set up by family members to honor Ted’s accomplishments, http://www.usspeedsport.com/.

Ted McMullen left a tremendous T-bucket legacy. Ted was very happy to discuss and share the details of his well-engineered T-buckets and it was Ted’s contribution that formed the basis for a very significant 8-part series on “How to Build a Hot Rod” by Ray Sisemore that debuted in Car Craft magazine in November, 1964 (and concluded with the July, 1965 wrap-up story, “$1399.88 Rod”). Never before, had the construction of any hot rod been covered in such detail and this series is undoubtedly responsible in large measure for the T-bucket boom that occurred in the 1960s.