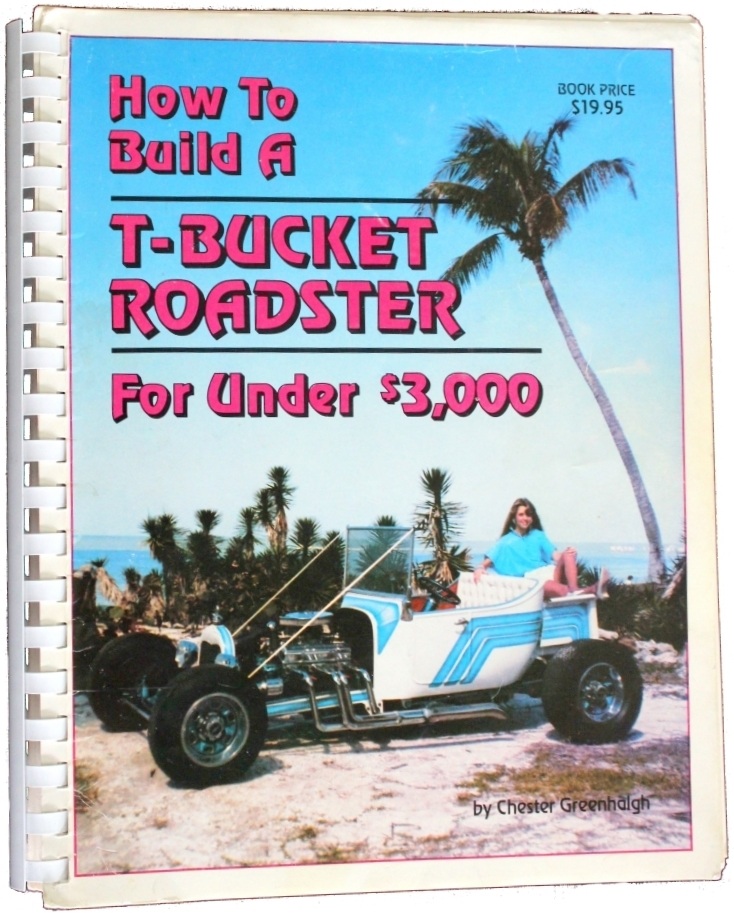 The following is a blog post I originally published 10 years ago on New Year’s Day, 2009. It was a great start to my New Year because it brought me into contact with Chester Greenhalgh, T-Bucket budget building guru. At the time, Chester had disappeared from the T-Bucket world for over 10 years. Nobody could find him and people were looking hard. During that time, because his “How to Build a T-Bucket …” bible had gone out of print and whenever people could find one of those rare copies they were selling for ten times more than they originally cost!

That’s right, people were paying $200 or more because the information was so good and complete. I considered myself lucky because I was able to pay only $150 for my copy (photo below).

In 2009 I was moved to write this post because a couple of people who didn’t know what they were talking about had written negative reviews about Chester’s T-Bucket book on Amazon.

Through the friendship that developed as a result of the post it has brought us to where we are today with the updated digital version of the Chester Greenhalgh “How to Build a T-Bucket for Under $3000” ebook and everything else at TBucketPlans.com and the other Hot Rod LLC websites.

[content_container max_width=’500′ align=’center’]”A few disparaging remarks have been made about Chester Greenhalgh’s out-of-print T-bucket bible, but they don’t hold water. It takes a true mechanical and scrounging genius to convert raw materials like old truck front axles, steel bed rails, iron water pipe, cast-off house trailer springs, furnace louvers and glass doorknobs into a safe, fun creation of beauty like a T-bucket — and on a budget anybody can afford! Just take a look at one of his creations on the book cover above. Chester can take a $500 rolling wreck Chevy passenger car and, like the food processing industry does with a pig, use everything but the squeal.

While the California Custom Roadster T-Bucket chassis plans introduced in the early 70’s were instrumental in terms of useful T-bucket build information, they were limited to just showing how to build a T-Bucket chassis. CCR’s plans covered building a frame, the associated brackets and suspension elements. However, a huge information void was still left. The guy living in Podunk who’d only seen T-buckets in magazines or maybe flashing by on the highway didn’t have a clue about how to run the brakes; reinforce and mount the body, bed and windshield; wire it; find a suitable radiator, driveshaft, shifter, lights and dozens of other things. And if he was able to somehow learn how to do this or farm it out it was likely to cost big bucks!

Most people had nowhere to turn for this vital T-bucket build information. Fortunately, the unassuming, ingenious, budget conscious owner of Chet’s Car Craft in Naples, FL decided to employ some of those same skills he’d used to successfully build T-buckets for his family and customers and self-published the legendary “How to Build a T-Bucket Roadster for Under $3000” in 1986. The first ad I saw for the spiral-bound Chester Greenhalgh T-Bucket book was in the February, 1987 issue of the now defunct Rod Action magazine.

Around that time, the folks at Motorbooks International struck a deal with Chester to produce a perfect bound softcover version of his work that was introduced in 1990. Somebody in Motorbooks’ marketing department decided that the appropriate cover photo for this “how to” book about building a T-bucket on the cheap would be a high dollar, Total Performance T-bucket laden with chrome and a blown Chrysler hemi — budget, indeed!

I mention this price history because Chester’s book has been long out of print. When I bought mine, prices were around $200. Currently, used copies available on Amazon.com are still in the range of $100 and up![/content_container]