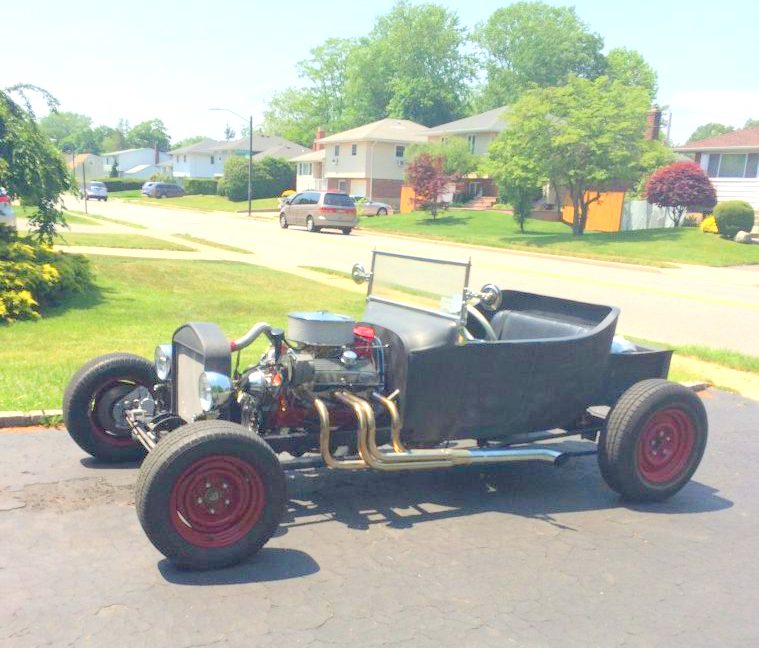 TBucketPlans.com started out as a one-page website back in 2009 offering the digital version of Chester Greenhalgh’s much-in-demand, yet out-of-print “How to Build a T-Bucket for Under $3000.” We had no idea then if we would ever see T-Buckets built using our plans, but we had hope.

Only recently, though, we reached out to some of our past T-Bucket plans customers to get their reactions to using the plans and to see some examples of T-Buckets built using our plans. We’d like to share some of those with you because you’re likely to find them interesting and inspiring.

NOTE: We’ve already started to prepare a Part 2 of this post to include more photos and comments of T-Bucket builds that benefited from our plans. If you’d like to share yours just enter a brief review with your photos on any of our plans pages.

We love under-construction photos and it was great to see Allen Williamson Sr.‘s T-Bucket being built using Chester Greenhalgh’s legendary “How to Build a T-Bucket for Under $3000” comprehensive how-to ebook.

You’ll note that Allen has followed Chester’s advice for a budget front axle assembly by going with an I-beam from an Econoline or pickup. He’s also using the rectangular tubing front crossmember, which is another Chester budget tip.

Allen noted, “Since it is my first open wheel car I needed a lot of help. It has been invaluable part of building my T. Still working on it but will finish soon.”

Larry Helgeson has a great looking bobtail T-Bucket and as an owner of our T-Bucket Master Plans package he points out the value of our plans for T-Bucket owners preparing to do repairs, refurbishment or upgrades.

As Larry said about that set of five plans, “Great reference material. Nice to have for dismantling and building. Nice to see other builds, too.”

William Wood is just getting started on his budget T-Bucket build and commented, “Love the book. Will be well worth your time with this hobby of ours. ?”

Our Nostalgic T-Bucket Plans Budget Bundle is made up of 3 plan sets from the 1960s and ’70s. Those are the ones that Frank Bertucci, the owner of this fine-looking T-Bucket, chose to comment on.

Frank notes that they are, “Great information on building complete car! From start to finish! Fantastic!”

Another cool budget build is the T-Rex T-Bucket undertaken by Greg Arthur.

Greg’s T-Rex step plates, innovative shifter handle and windshield supports are but a few of the unique features in this build.

It was rewarding to receive Greg’s brief comment that, “This book answered a few of my questions and helped with my custom build.”

Our Youngster Free T-Bucket Plans are the perfect start to many T-Buckets built using our plans and as Randy J noted, the “Plans were great. Bout have it done. Very helpful.”

Of course, the T-Bucket world includes C-cabs as well. So it was great to receive the above photo and review comment from Canadian purchaser, BowTieBucket, who commended our “How to Build a T-Bucket” ebook by saying, “Good book. Have my own shop building T buckets for years. Bought the book just to see what’s new. It is a great guide for the novice and will save anyone who follows it quite a bit in the end.”

And Gary Bonnell made our day with his great looking T based on the California Custom Roadster Plans. According to Gary, “CCR is the best. I built my LS T from their drawings. Support from the CCR staff is second to none. Any questions were answered promptly and politely.”

While it may be hard to believe Cory Cothern‘s T-Bucket was built following the CCR Plans. To which Cory adds, “Great plans. Helped me build my car. I added 10″ to the chassis plans for my own custom twist. Highly recommend these plans.”

Another cool looking budget build using our “How to Build a T-Bucket for Under $3000” is that of Shalom Gordon, who updates us with, “Loved the book. Helped me build my rod for $8000. (Inflation since the book was originally published).” That figure, by the way, is almost 25% less than what normal inflation would be. So, great job.

It’s great to hear from seasoned builders like Gary Atkinson who uses plans like our “1960s T-Bucket Plans by Allied Industries“. Gary relates, “I remember when I was young seeing all the roadster plans out there, i.e. Ohio, CCR, Bird, Allied etc. I didn’t have the tools or space to build one but always wanted to. Since then, I have built quite a few T’s and such but still like to look at the plans. I have most of the plans available too.”

It was really great to hear from Mark about his use of our Youngster Free T-Bucket Plans with his budget build. “Hot Rod magazine did a story on how they built an inexpensive T-Bucket. After reading it my brother and I decided we could do it for less. We downloaded the plans and went about looking for the other parts as low buck as possible . We accomplished it for way less than the magazine said we could. Car drives like a go cart. Awesome car. Fast and safe. Thanks”

Rich Bloedorn is another accomplished T-Bucket builder that took the time to comment on his use of our free plans and included photos of two of his T-Bucket builds, starting with the cool black one above.

In commenting on both of his above T-Bucket builds and our plans, Rich noted, “I’ve built several “T” roadsters using information from Sizemore’s Car Craft plans, Kirby’s T build in Argus’s ‘How to Build a Street Rod’, R & C’s T bucket issue, and Youngster’s plans. I think if I was back to being a beginner; Young’s plans would be a great basis to get going on a build.”

And all T-Buckets are not either black or blue. Another user of our free plans, James Nelson, said, “I did end up building a T-bucket with some mods of my own. I drove it for 4 yrs until somebody made me a offer I could not refuse.”

Broderick Lingham from the U.K. let us know how he used our plans as well. “Plans were great and the project is now finished. In hindsight I would have extended the chassis as I had a few issues getting the V8 engine Radiator and Fan to fit. Ended up using two electric fans and no blade. Great chassis for everything else.”

You just have to love the ingenuity of a guy like John Mathews in terms of how he used our free T-Bucket plans. “Yes I used your plans and I took 16 in. out of the length and started building custom golf carts you can see in the picture that we took second place with full size T buckets.” How cool is that?!

Now, you have to remember that while our plans are intended primarily for T-Buckets they can have many other uses as well, as you’ll note from the following examples.

Beyond golf cart size T-Buckets, with some adaptation of the plans a mini-T-Bucket can be built as well like Rick did. He notes, “I haven’t built a full size one, but I used it as a guide to build a 2/3rd scale for my grandson. 78″ wheelbase. Built my own 5″ drop front axle, complete with radius bars.”

“Learned a lot on frame construction. Maybe grandpa will try a full size one some day. If only Speedway could lower prices a little for seniors.”

Rick added, “Plans were excellent, simple back to basics. I highly recommend these to novices, and professionals. As you die when you do not learn from others.”

Speaking of creativity, Richard H. said, “I have used the basic T-bucket design in three of my custom one-of-a-kind hot rods and these plans have been really helpful in my custom frames.”

But Rick Hartpence gets my award for creative use of Chester Greenhalgh’s “How to Build a T-Bucket for Under $3000“! It was truly mind-blowing to hear from Rick that, “I used ‘How to Build a T-Bucket’ as a reference while building my hot rod. It was very helpful, full of great ideas.” And Rick’s Cherry Bomb Camaro C-Bucket is the epitome of cool ideas.

Finally, below is a sharp looking T-Bucket that was built using the CCR Plans. The image was submitted along with a review but for some unknown reason we can’t match it to the reviewer comment. So if this is your T-Bucket or if you know whose it is, please let us know because it’s just too nice not to be properly credited. Thanks.