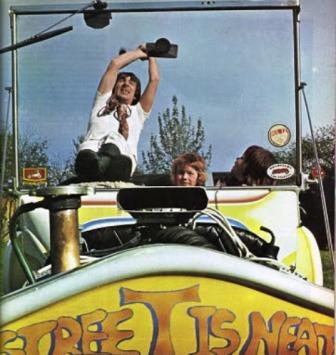 OK, the lyrics are kind of dopey and I probably like The Who’s version of Jan and Dean’s “Bucket T” the least of the three groups I’ve heard that recorded it. But, to my knowledge, only one member of any of the groups that recorded this tune could lay claim to actually owning a T-Bucket: the late, legendary Keith Moon, drummer for The Who. And to strengthen his T-Bucket, or shall we say Bucket-T, credibility Keith Moon took a rare turn singing lead on this song. Although he was no longer in possession of a valid drivers license, Moon added this T-Bucket, built by legendary British hot rodder Mickey Bray, to his stable of vehicles. And stable of vehicles it was. Bray, who later became a founder of the U.K.’s National Street Rod Association, originally built this fiberglass bodied T-Bucket with a small Daimler Hemi V8, which was later swapped for a 273 cubic inch Mopar, given a psychedelic paint job and then sold to Moon. So, not all T-Buckets of historical significance were necessarily built in the U.S.A. Surprisingly, the T-Bucket “Fad” exploded almost simultaneously in the U.S. and Canada, the U.K. and Australia/New Zealand — thanks in no small part to the international popularity of such magazines as Hot Rod, Car Craft and Rod & Custom.