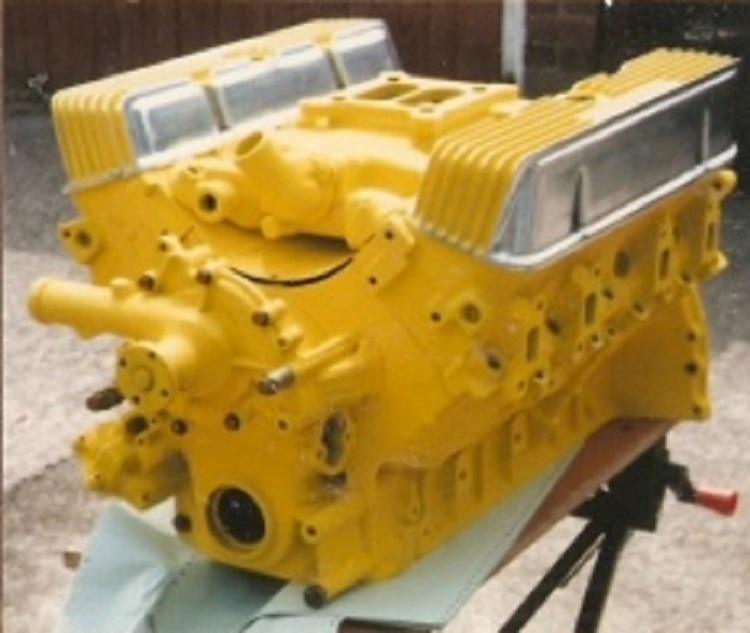 Beautifying that old donor engine was the next step in Dave Melling‘s do-it-yourself T-Bucket. You’ll discover that Dave’s T-Bucket engine paint first choice didn’t work out at planned and that’s not really unusual. The key to T-Bucket engine paint success is preparation and a clean engine block is the first step. I’m no paint expert, but I’ll venture Dave’s T-Bucket paint problem might be due to using the base coat of one manufacturer with the top coat of another. With the chemical sophistication of paint formulas today it’s probably a good idea to stick with the same supplier for both base and top coats to ensure compatibility. The photos above and below show the base coat of yellow (made by Spectra). This is, of course, VHT (very high temperature) paint. This photo shows the top coat which is a special American paint containing a metallic finish. It was supposed to be VHT paint, but as you can see from the photo below this did not turn out to be the case when the engine was oven-baked to harden the paint. The paint blistered and burned and lifted from the block itself. This was a total disaster that I could do without! The next step, therefore, was to dismantle the engine and have each piece shot-blasted to remove the old paint, and then start all over again! Not only did I waste all of the previous paint, but the shot-blasting cost a bit, too! The block also had to be completely cleaned as the shot is, by nature, very abrasive and the slightest piece could wreck a new engine while it is running. This photo and the one below show the block upon its return from the shot-blasting operation. I used the two old Rover valve covers to protect the cylinder heads from contamination. This shows the engine block looking as good as new following a respray. The colour this time was made by Hycote and I knew it to be OK because I had used it before on my Mustang. It is probably best described as a bright canary yellow! It has a powdery, matte finish, in keeping with most other very high temperature paints.

To me, Dave’s choice of color for his engine block made for a great contrast that really helps showcase that beautiful aluminum V8 engine. So, following our T-Bucket paint experience we’ll move on to the engine rebuild.