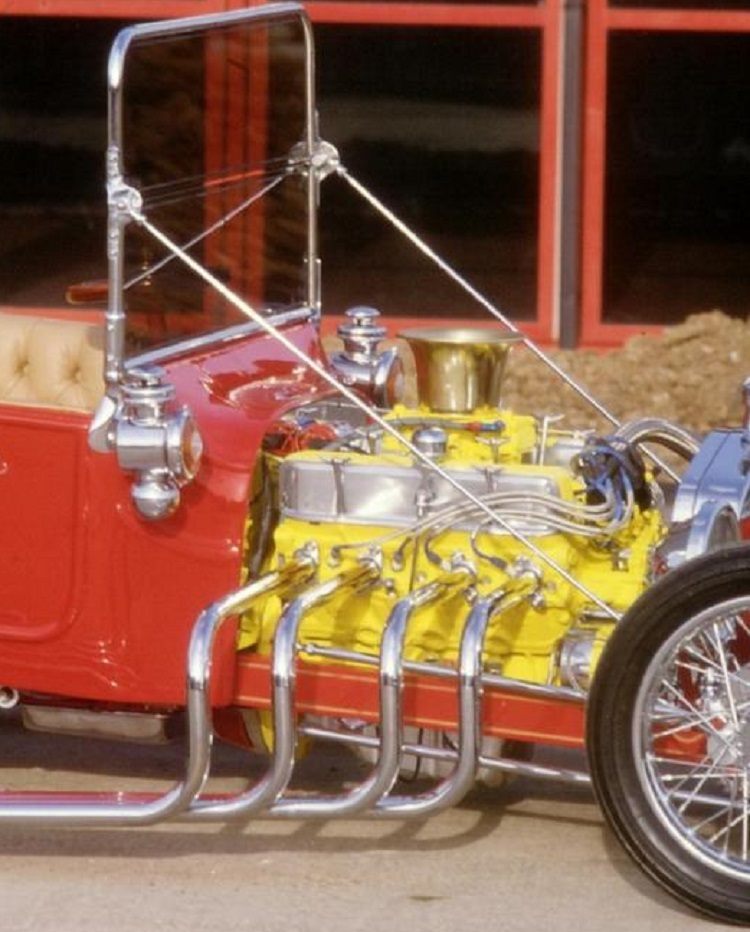 Get ready to watch a silk purse be crafted from a sow’s ear as our next series of installations cover the transformation of the Rover V8 T-Bucket donor engine Dave Melling acquired for almost nothing. While Dave’s U.K. build is based on the Rover V8, if you’re lucky enough to find an early Buick aluminum V8 as your T-Bucket donor engine you’ll learn a lot that’s directly applicable to your 215 cu. in. lightweight V8. There’s work to do, but it’s well worth it when you end up with a T-Bucket power plant as beautiful as this one. This photo shows a rear view of the engine showing the flywheel and ring gear. The six bolts holding the flywheel in place are drilled in an off-centre pattern so that the holes will only line-up in one place, thus preventing you from fixing the flywheel in the wrong position. The two lifting eyes are still attached to the rear of the cylinder heads, and in between them, underneath the manifold, you can see the heater inlet hose. This photo shows the front view of the engine, with the alternator, water pump and crankshaft pulley wheel dominating the photo. The hoses hanging down at the front feed the oil from the gearbox [transmission] into the cooler which is an integral part of the radiator. These hoses will be replaced by hoses running from the gearbox to the gearbox oil cooler, and all of this will be contained underneath the car bodywork. The oil filter, which faces forward out of the front of the engine, will have to be one of the earlier, dumpy ones otherwise it will simply not fit in the space available. This side view of the front of the engine shows the alternator in its original position, the alignment of the two pulley wheels (of which I will need only one) and the oil filter’s awkward angle. The photo above shows the engine from the front — there seems to be a fair amount of space here which is not used, hence the alternator is being moved down here and bolted to a bracket which is in turn bolted to the engine block where the fuel pump used to be. Disassembly of Dave Melling’s T-Bucket donor engine is next on the agenda. So tune in tomorrow.