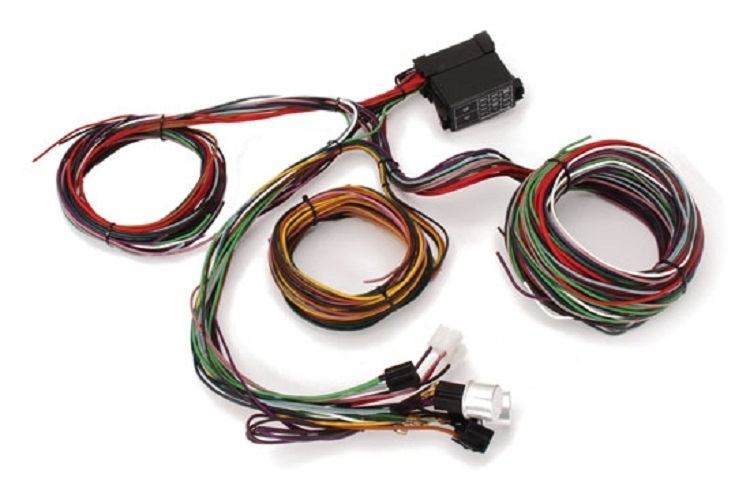 Some of the most experienced fabricators, welders and car builders shudder at the thought of T-Bucket wiring. Even though Chester Greenhalgh shows how to do your own T-Bucket wiring in his “How to Build a T-Bucket” ebook, many builders will opt for the simplicity and lack of confusion offered by the Speedway Motors Economy 12-Circuit Wiring Harness.

But, Dave Melling chose to do his T-Bucket wiring the hard way, although it’s the cheapest way. This is what a Rover wiring loom looks like when it has been removed from the donor car and un-taped. This is what I started with for the T-Bucket wiring.

Having decided to mount the battery and fuse box under the passenger seat, I was able to start the wiring look, working from the circuit diagram, starting at the battery itself. Initially I just laid the wires in place, then as they grew in number I was able to tie them together using wire food bag ties, which enabled me to add wires at a later date. As you can see from these photographs, there is still a considerable amount of wiring even for a car with a modest amount of electrics. There is no heater motor, no windscreen wipers or washers, no hazard warning lights, auxiliary headlights, etc. Just the basics with the addition of a switch for the fuel pump and a switch for the fog lights which are part of the rear light cluster anyway. There were plenty of spare positions available in the fuse box for items as as the fuel pump, etc. You can see how the dashboard is able to pivot forward to allow access to the wiring behind it. There is a loom for each headlight, one for each side of the engine and one which runs around the back of the car to feed the rear lights and the brake light switch. The front cowl lights are actually reproduction items from America, originally supplied with red lenses for the rear, but I modified them to be the side lights and front indicators combined. The lens, which I had to fabricate myself, is a combination of a Vauxhall Victor sidelight set inside a Transit (Mk 1) front indicator lens. There is a tube inside the Thames light bulb holder to keep the two lights optically separate. The lights will eventually be bolted to the windscreen posts. The rear lights are trailer units bought from a trailer accessory shop. The rear mudguard was designed and built around them so that they appeared to be part of the mudguard itself.

In our next series of updates, Dave Melling digs into that Rover V8 from his almost no-cost donor car. And if you’re a Buick aluminum V8 fan you’ll find much good information on overhauling, beautifying and installing your 215 cubic inch V8 in a T-Bucket.