Recently on Twitter I saw a cool 1970s era supercharged T Bucket for sale that caught my attention. (Which reminds me: if you’re on Twitter and you don’t follow us you should. We tweet some pretty cool stuff. Just follow us at https://twitter.com/TBucketPlans).

Two things jogged my memory about this supercharged T Bucket. The first was the nifty little 3-71 GMC supercharger with the vintage Cragar 3 V-belt drive. Something not seen very often these days. The second thing that grabbed me was the name, “Capt. Nemo” on top of the Deuce grille shell. By golly, this supercharged T Bucket is a survivor!

I first saw this sharp looking T-Bucket in the February, 1970 issue of Rod & Custom magazine. Although built on a $3200 budget, it was the subject of a one-of-a-kind, 4-page feature by founding editor Spence Murray titled, “Street Testing Lee Neiman’s ’25 T!” The premise of this unusual “street test” was that a retired from R&C Spence Murray sent a note to editor, Bud Bryan, about encountering a supercharged T Bucket on the highway as he was traveling the Midwest. That was followed by a series of comedic messages between Murray and Bryan about tracking down what was then a rather rare phenomenon: a GMC supercharged T Bucket hot rod that was actually driven on the street. (It was pumping 10 pounds of boost into the .040 overbored 283). And driven on the street it was, with Neiman logging almost 1000 miles in the Chicago area during the less-than-comfortable months of October and November. Of course, wearing a fuzzy winter coat certainly helped in that regard. Long story, short, Murray’s street test summation read:

The Neiman roadster I consider to handle well without choppiness usually found in cars of the type. The 105″ wheelbase is long but contributes to general roadability. Entry is by stepping over the side, not difficult for driver or passenger. Acceleration was not accurately measured, but I consider it exceptionally good. Seating is adequate, but those on the tall side suffer from lack of legroom, inherent in T bodies. Neiman’s attention to assembly details was above average. Owner gets a tip of the hat for his first car-building effort and for his determination to finish the project against difficult odds.

At the time of the street test, the car was finished in Rallye Gren lacquer by Jerry Blum. 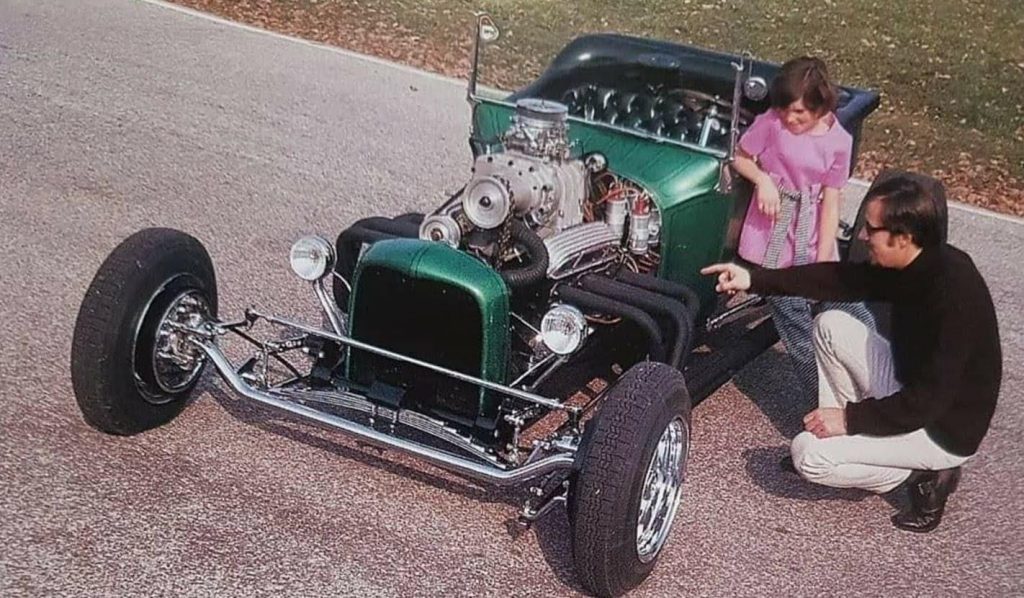 Lee was also a Barrington, Illinois resident like Cotton Werksman and actually did the wiring on Cotton’s street-legal 200 MPH mid-engine ’27 T.

I next saw Neiman’s “Capt. Nemo” (his nickname) T-Bucket in what I consider the best T-Bucket focused magazine issue ever published: Rod & Custom, January, 1974. The above photo is from that issue which, by the way, appears to have had 90%+ of its vast T-Bucket content written by Bud Lang and Gray Baskerville, two of the best in the business. By then it sported a shocking pink paintjob by Bill Vollmer with lettering by Duke.

Fast forward 40+ years and with the exception of different wheels, headers and air cleaner and Capt. Nemo is remarkably well-preserved. Today, the 4 inch dropped front axle with ’54 Chevy spindles and drum brakes remains the same, although the tie rod has been dropped below the spring and a steering damper has been added to the benefit of the Econoline steering box. The solid walnut tailgate with ’61 VW taillights look is different and well done and wire wheels have replaced the original Cragars. Although the blown small block was mated to a Chevy Powerglide tranny it had a modified torque converter and when Lee gave it a fun test at the Union Grove Dragway the little T-Bucket turned a 12.01 ET at 126 mph, despite much tire spin! The 42″ split, drilled and chromed wishbones are another nice touch and attach to the 1957 Corvette rear end using PSI brackets. The walnut dash with recessed Stewart-Warner gauges remains the same, nicely matching the reproduction T steering wheel and it also appears that the original John “Stitch” Benavides upholstery is in tact.

Since first seeing this nostalgic T-Bucket for sale about a week ago, with an asking price of $26,995, I see that it has sold and someone is the lucky owner of a very well done supercharged T Bucket with a lot of history. It was built to be driven and I hope to see it out and about.

Thanks to the Petersen SEMA Digitization Project, there are a few never-before-seen photos that help tell the story of this cool 1960s T-Bucket hot rod.