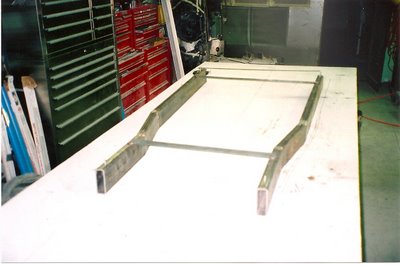 Follow along in this installment as Bob Hamilton shows you how to build a tapered 1927 T Bucket frame that follows the ’27 T’s body contours.

How to Build a Tapered 1927 T Bucket Frame “Here is the plywood table with the body outline and the 1927 T Bucket frame outline. I set this up prior to building all of my frames – now. Years ago, I just measured and laid things out on the floor and took my chances. Now with everything up on the table, I can see and build with a lot more accuracy. This frame will be built using 1 1/2 x 4 x .188 wall rectangular tubing. Most of the frames I build are 1 ½ x 3 x .188 wall rectangular tubing with the rounded edges. This frame will be constructed in three parts: the middle or side rails, the rear section which contains the kick up, and the front section which I will taper from in front of the front wishbone brackets to the bottom of the round schedule 80 tube front cross member which will make it 3 inches. So the taper will be from 4 inches to 3 inches which will give the frame some accent in the front and it will not look or be so boxy.” “Two things to notice with this picture: One – I cut the angle for the kick in the rear (22 ½ degrees) before I started the bends in the frame (it’s just easier when the tubing is straight and flat). The second thing to notice is that there are two ¼ -20 holes with studs on each end and are in the same location on each rail in the center @ ¾ of an inch. This is so that I can use them for reference points as I build and curve the 1927 T Bucket frame. The location is not important – what is important is that they are in the same place on each rail. These will stay and be used until all the brackets and measurements are in place and are right. Then when I begin to finish weld and finish the frame, these will be welded up and will no longer be used. There needs to be points of reference otherwise the end product can be off enough that it could affect the performance or outcome of the product.” “After deciding where the first bend will be, the cut is made and a disc and small 4 inch hand grinder are used to bevel the cut edges and open the cut if needed. The come-along is then used to pull the frame together (remember – I’m only cutting through three sides). When the correct angle is obtained, tack the bend in place.” “The cut is made on the second rail (in this case remember to turn it upside down because it is an opposite rail and also has the angle cut on the back). Continue the same procedure with the beveling etc. and then use C–clamps and angle iron/flat bar with both pieces so that they will be the same – and tack them in place also.” “Here is an inside shot with the 1927 T Bucket frame rail to be tacked on the bottom and the clamps etc. in place. This is the critical time and it may have to be undone and the cut opened up some more in order to make both sides match.” “Again I use the clamps, come-along, and metal to line up the rails. Notice how the cut ends are opposite. If I forget to do this, I will have two of the same side rail and it just won’t work. Sorry.” “The rails are set up aligned on the table and squared using the ¼ – 20 studs / pins and use a tape that has an end with a ¼ inch hole in the end – carpenters tape. Do not use a tape that just has a 90 degree hook on the end. The measurement will and can be off. Measure corner to corner and adjust by moving one rail forward and backward. Make sure that the width of the rails is what you want also. When set, take a couple of 3/8ths pieces of flat bar and tack the rails and then double check before moving on.” “This is just another view showing the 1927 T Bucket frame tacked and the two bends in the rail. This frame is pretty simple. I am not trying to follow the contour of the body real close. Previously, I built a Model A roadster and it took 29 cuts and bends on each rail to make the frame fit the body the way I wanted. How close of a fit you want the frame is your decision. Most highboys I build will have from 4 to 9 cuts per side depending on the body manufacturer. This car is a highboy but it is also set over the frame about 3/4th of an inch and also is going to be built old school and won’t be as critical or showy as most of the cars I build. This car will look good, run good, and just be fun to play with.” “With the side rails squared and in position (I am using 1 ½ in x 3 x .188 wall tubing for the rear section – the small 1 inch gap will be filled and then finished), I built the rear kick to be a 45 degree angle. This means that each cut is 22 ½ degrees. This is the same for the upper angle winding up with a 45 degree cut on the rear part of the cross member to give me a 90 degree rear frame member. The two pieces that make up the rear frame were done on the bench and finish welded and then clamped to the side rails with flat bar and everything leveled. The rear crossmember is then figured and cut. I do it this way because for some unknown reason, if the rear cross member is pre-cut – it’s either too long or too short. Too long is ok – too short is not good!” “The rear crossmember is squared and held in place using C-clamps and flat bar. Use the tape and measure crosswise from the reference pins and adjust the crossmember until they are as close to square (equal measurements) as possible and then tack in place.” “Another shot showing the alignment set up.” “Now that the center and rear section of the frame are in place, it is time to set the body on and double check the fit and see if there needs to be some modifications. Now is the time to make changes, not after all the brackets are in place.”

That’s all for this 1927 T Bucket frame installment. It’s fascinating to actually watch Bob build a frame like this and his 4-1/2 hour StreetRod 101 Hot Rod Frame and Chassis Construction DVD covers it in great detail. It’s just part of the StreetRod 101 DVD Library you’ll find at our sister site, StreetRodPlans.com.

Remember to check back here often because we’ll continue this cool 1927 T roadster series on a regular basis and will also continue to add other informative T-Bucket hot rod stories.