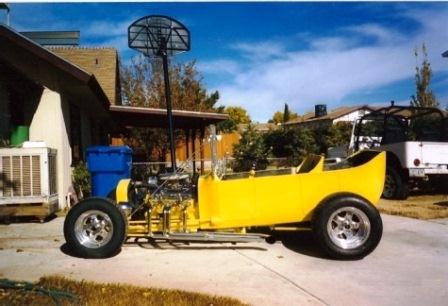 It seems like a growing number of you are looking for a stretched T Bucket body for more room, whether it be to take the family or more than one friend for a ride, haul a suitcase, cooler or other gear, or just to accommodate those extra few pounds and inches you may have picked up over the years. If you’re a T-Bucket lover, the next logical step is to what may variously be called a Tub-T, Phaeton, or T-Touring. And it seems like more and more guys and gals want to know how to “roll their own” stretched T Bucket body. Well, if that’s the case, you’re in luck — because we’ve got your answer right here, thanks to Utah hot rod builder, Bob Hamilton. If the name sounds familiar, that’s because Bob is the “star” of the very popular StreetRod 101 DVD series made up of 4 awesome DVD sets available at our sister website, StreetRodPlans.com.

Thanks to our many loyal TBucketPlans.com followers, our introduction of Bob’s videos continues to be very successful and, in return, we wanted to offer you this little short course on how to build a stretched T Bucket body on a budget. So, follow along as Bob Hamilton describes how he built this beautiful yellow Tub-T awhile ago, before he began working in the nicer shop that’s the background for his informative StreetRod 101 DVD sets.

How to Build a Stretched T Bucket Body Bob started with your basic standard fiberglass t-bucket roadster body, shown before he cut it into two pieces. Body has been cut behind the door moulding and 1×2 pine has been glassed to the inside of the body with fiberglass bondo – not kitty hair. The opening has been set and adjusted to 30 inches, which is 6 inches shorter than a stock T – touring. The body was covered with a thin aluminum (20 or 22 ga.sheet steel will also work) and bolted through with 1/4-20-bolts with washers on both sides. Before bolting in place for the last time, Bob placed a few sheets of wax paper against the outside of the body and the inside of the aluminum Next, he laid fiberglass mat (3 layers of 1 oz. works the best and is the easiest and fastest) from the inside and overlapped the edges by 3 to 4 inches. After the glass had set, he removed the aluminum and wax paper, cleaned surface with lacquer thinner and filled the 1/4 inch holes and imperfections with fiberglass bondo. Finished with regular bondo.

Here’s a tip. If you’d like to see exactly how Bob does this kind of fiberglass work we recommend you get a copy of the StreetRod 101: Fiberglass Body Modifications 5+ hour 3 DVD set. In that DVD set, he lengthens a Model A roadster pickup body using the techniques described here.  (If a picture is worth a thousand words, a video is worth a million!)

The following photos show one way to mock up for the frame. Bob doesn’t use this exact method anymore. He finds it’s easier to do everything on a plywood table. Another shot of the frame and rear suspension system. Transmission mount, cooler, trans lines, rear panhard bar, and shock mounts along with the rear spring perch, master cylinder, body mounts and rear wishbones/radius rods shown. In the background the transmission cover, made from fiberglass is also shown. Fuel line and battery cable along with mounting clamps shown, too. Another shot showing the steering box mount (1938 Ford 2dr. sedan mounted on it’s side). This also gives you an idea of how to support the rear end with stands while you build a car. They are quick and easy to fabricate and take very little time and do a great job. Finish welding and finishing frame and getting ready for primer can be a cumbersome task. This shows the frame with all the brackets set on some tall sawhorses to make it easier on Bob’s back to weld, grin, bondo, and sand, fill and prime, sand and fill – you get the idea. Cheap, easy to build, and reusable for the next car. If you make one smaller, then they will also stack very nicely. Bob doesn’t use these anymore. He uses two engine type stands made from 1/8th inch steel tubing. He just modifies the mount system for whatever frame he is working on at the time. Rear end mounted to a vise using just a 3/8 in. plate with three holes drilled in the plate and mounted to the rear end and clamped to the vise. Easy to weld, grind, prime, etc. For the front axle Bob used small stands (two piece) one on each end that attach to the kingpin hole and mount like an engine stand thus allowing the axle to rotate and lock to make finish work easier. Bondo is used to finish the outside of the stretched t bucket body after any rough fiberglass has been removed. Look closely on the driver’s side and you will see a sheet metal tunnel fabricated and mounted with fiberglass bondo. This is also found on the passenger’s side and is used to run the wiring to the front from the fuse box that will be under the rear seat. The rear door moulding is not shown here, but is simple to do. Take 3/16 or 5/16 brake line and bend it to the shape of the door opening you desire. Use a small amount of bondo in three or four places on the body, under the brake line. Push it into the bondo, line it up and secure it with masking tape. Wipe off the excess. After the bondo has kicked, take a bondo spreader and cut it to the shape or contour of the moulding. Cut it so that one side is in contact with the body at all times. Mix up some bondo and spread it along the tubing with a regular spreader – then take the custom spreader and follow the tubing around on the outside and the inside – remove excess, let set, sand and touch up. It really works great and saves a lot of time. Frenching in tail lights and a license plate frame is also quite easy. Make a wooden mold, paint it with a spray can, put car wax liberally over the mold, lay on 3 layers of 1 oz. matt. When set, remove carefully, clean wax out with lacquer thinner, touch up the part, cut the hole, and glass from the back side – catching the body and the part in an L-shape. After this sets, use fiberglass bondo on the outside for any large gaps and finish with regular bondo from there. This picture illustrates the final assembly. Be careful and use a chamfering tool in a holder by hand (no power tools with this step) on each side of a hole. After this is done, take a drill bit for that particular hole and use a slow speed and CAREFULLY clean out the hole. Clean all holes prior to any assembly work. This car used a lot of chrome bolts. If this is your choice, plan on about $1000.00 for nuts, bolts, washers, and fittings!!! Another way is to polish the heads with a buffering wheel using white rouge compound, clean, with lacquer thinner, and after assembly – use a small artist brush and paint them with a clear coat. It works! Here is a rear shot showing the final assembly. Some wires are run through the body and some Bob ran through the frame with pre-drilled holes. Try and figure what and where you are going to run ahead of time during the build. For example: Bob drilled a hole on the inside front rails for the headlight/turn signal wires and an extra hole for the electric fan. This exit hole is drilled behind the firewall in the frame so that the wires exit and then run up to the dash, or can run wherever you want. Another final assembly shot showing the suicide front end and also the steering arms to the front. If you run this type of set up, the arms must be heated and bent outward so that the tie rod hole and the kingpin center lines will line up with the center of the rear end. This is the Ackerman steering principle. If this is not done, when you turn right – the right wheel won’t turn sharp enough and the left wheel will turn too sharp. Both will result in bad handling (steering on turns) and excessive tire wear. This shows the front seat divider in the stretched T Bucket body which was formed from 20 ga. sheet metal with a 1×2 piece of pine fiberglassed to the inside and 1/8 inch wooden door plywood (luan plywood) glued and stapled to it along with the same being done to the sides of the body on the inside. This cleans up the mess and allows a place for the upholstery to be attached. Here the stretched T Bucket body is running and only lacks the upholstery. Bob did this at home and it was his first upholstery attempt on a hot rod. Some minor mistakes, but cheap!!! Material, foam, and carpet about $125.00. He bought a portable sewing machine for cheap, and kind of taught himself! Not bad for a beginning upholsterer, but remember that Bob’s motto is, “You can do a lot of big things if you just put your mind to it.” We hope you’ve found this stretched T Bucket body building lesson from Bob Hamilton interesting. I guarantee you, though, that it’s only the tip of the iceberg. If you haven’t ordered yours yet, there’s no better time than now to pick up the entire StreetRod 101 DVD Library.

4 thoughts on “Stretched T Bucket Body: How To Do It Yourself”