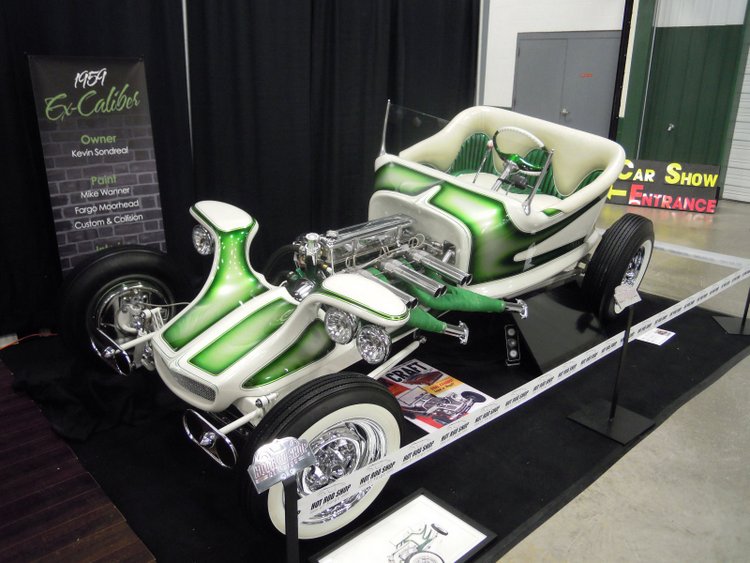 One of hot rodding’s most famous cars is Ed Roth’s Outlaw. Built in 1959 as the beatnik embodiment of a space age T-Bucket, it was the first free-form fiberglass show car and it started a revolution. I’ve drooled over the original at the Petersen Museum. I’m also a big fan of the Outlaw clones built by Fritz Schenck and Mark Moriarity, both with bodies popped from the original Roth molds. Hey, who wouldn’t want their own Outlaw? While the original Outlaw and its clones now reside in public and private museums and collections, it was exciting for me to learn this week that for way less than six figures some lucky guy can own a very cool Roth Outlaw tribute car. It’s unique in itself because it’s a creative take on the original that maintains most of the cool original elements while adding some eye-catching changes. And, it’s built to be both a show winner as well as a driver! Back in 2010, I blogged that a limited number of new Outlaw bodies were being made from the original Ed Roth molds, which had been refurbished by artist, pinstriper and former Ed Roth associate, Jimmy C. At the time I wondered if many would be sold at the price of about $5,000 for the body and nose piece. Fortunately, North Dakota farmer, Kevin Sondreal, took the leap and bought “body #8”. When Kevin asked if seven other bodies had been sold up to that time the response was, “Well, your’s is the eighth order but you’re one of the only ones who’s actually paid.” Kevin really enjoyed collecting parts for this car over a period of 15 years to be able to find “just the right ones” for his vision. He didn’t want to copy Ed Roth’s Outlaw exactly but did try to keep him in mind of every part he would put into this project. Not wanting to clone Ed’s original, but rather to build a Roth Outlaw tribute car was Kevin’s objective. That’s why he decided to go innovative on the engine and instead of the Caddy V8, used a 1965 Chevy 6 cylinder. Beyond the chrome, to make it both visually stunning and a performer Kevin had the rare “ALGON” racing fuel injection converted over to electronic fuel injection using Megasquirt for the fuel management. While this Roth Outlaw tribute car is currently for sale on eBay, I should point out that I’m not being compensated in any way for doing this story. Rather, I was so excited to learn about it that I contacted the owner to get more info and photos. Although not a clone, unless you’re pretty good on Outlaw details and aside from the cool 6-banger and the front suspension it’s hard to tell whether or not you’re looking at the original. I especially love the interior and the fact that it’s built to be driven makes it even sweeter. I mean, who isn’t swept over with waves of nostalgia upon seeing such an awesome rolled green Zodiac flake and white interior? The interior was all done by Jon’s Recreational Repair of Fargo, ND. And the ’58 Chevy Impala steering wheel? Come on! Who says is has to always be vintage S-W gauges, when something as sharp looking as the Von Hot Rod Series by Classic Instruments look so good here. The build project, which we’ll get to, took over seven years. So far, Kevin has only had the chance to show his Roth Outlaw tribute car two times and won trophies both times. Hey, even  Danny “Count” Koker gives it his seal of approval. And for you sharp-eyed Outlaw fans, you’ll dig that Kevin did have a reproduction California license plate made of the same one Big Daddy Roth had on his car.

Pardon the smaller images, but I think you’ll still see some of all that went into building this stunner. The frame for Kevin’s Roth Outlaw tribute car was built by Eric Riley of Riley Automotive in Commerce City, CO. The Ford 9 inch rear end with 3:08 gears is mounted with a Model A rear crossmember, also with 12 inch Lincoln drum brakes. The engine was rebuilt by Ben Adams of Adams Automotive in Grand Forks, ND. The 194 cubic inch Chevy 6 dynoed 183 horsepower at Adams Automotive at sea level. A 2,000 rpm stall converter with a Powerglide transmission and shifter by Lokar gets all that horsepower to the rear wheels. Starting with the authentic reproduction Roth Outlaw body and perfect copy of the original nose piece by Jimmy C, it was turned over to Mike at Fargo Moorhead Custom & Collision of Fargo, ND. for paint. Many layers of PPG paint cover this Roth Outlaw clone. First was a silver base coat, then topped with Pearl White. That was followed by custom mixed Metallic Green. There was over $500 in tape used alone to create this version of Ed Roth’s wild design. Then clear coat after clear coat were added for a finish that’s smooth as glass! Kevin gives all the credit for working out all his project problems and for assembling his Roth Outlaw tribute bucket to Cody at the Hot Rod Shop of Fargo, ND. Kevin’s tribute is named Ex-Caliber as a playful takeoff on the difficulty Ed Roth had when naming his original creation. Ed started with the misspelling Excaliber and then Excalibur, for the legendary sword of King Arthur, and then when people couldn’t pronounce it he changed the name to Outlaw. Ex-Caliber rolls on Coker-built US Royal tire copies and 15 by 5 & 6″ chrome reverse custom built rims. And roll it does.  “It’s a blast to drive!”, according to Kevin.

Kevin’s original plan was to hit the car show circuit and enjoy this car. But, as often happens, plans changed. Now he needs to let someone else enjoy and show her. So, if you’re in the market for a show AND go machine with some serious traditional hot rod roots this is your chance to grab it up on eBay, but better be quick.