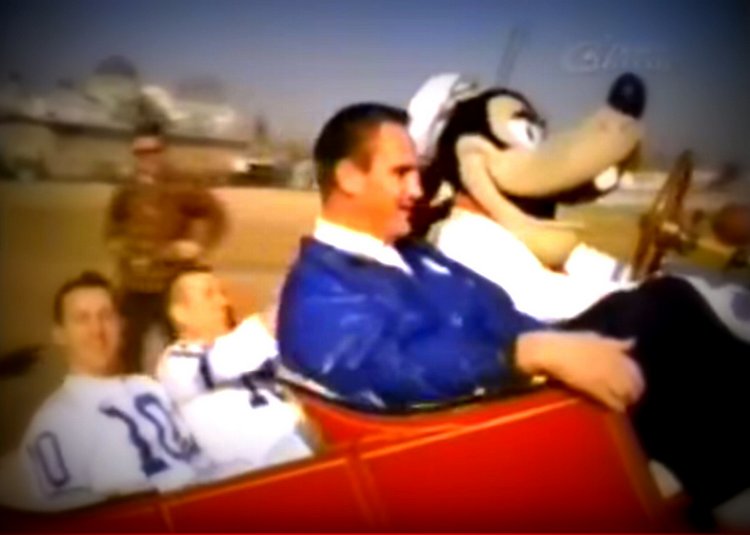 I have to admit that a Model T clown car likely had a major effect on my getting hooked on T-Buckets at a young age. I didn’t see Norm Grabowski’s T-Bucket in LIFE magazine until 1957 when I was eight years old. By then, however, I had already been sensitized to unique Model T configurations since the age of five. That’s when I saw my first circus parade that featured a bucking Model T clown car. It was way more exciting than any bucking broncos I’d seen in my regular diet of cowboy movies. What kid of the 50s wouldn’t be in awe of such a vehicular performance?! After all, this was a decade before Bill “Maverick” Golden‘s “Little Red Wagon” came into existence. By the 1930s, millions of Model T Fords were 15+ years old. Most had been heavily used and abused. Given how cheap they were to begin with, semi-trashed Model T’s could be purchased for $5-10 or simply hauled away for free. They were the perfect material for wild experimentation which led to the first Model T clown cars. All one had to do was strip away anything nonessential, whack about a foot or more out of the frame rails to shorten the chassis and you had a low- or no-cost wheelie machine. Of course, it helped to add a few passengers to provide ballast behind the rear axle. The Model T was then transformed into a rolling teeter-totter that only required the slightest forward momentum to wildly kick the front wheels skyward. So, the original Model T 4-banger engine was more than adequate. You could say the Model T clown car was the original “funny car” (pun intended). By the late 1940s just about any fun-loving and industrious Shriner, VFW or Moose Lodge could have their own crowd-pleasing entry in the local parade. Back then, traveling circuses and carnivals were everywhere and a parade through downtown was the easiest, no-cost way to spread the word they were in town and invite the citizenry to come out to the “big top” tent to buy a ticket and take it all in.  So, a Model T clown car became an essential marketing tool. Even today, some of those early Model T clown cars are still exciting young and old in local parades. So it goes without saying that when I saw that a very unique in terms of its history Model T Clown Car was for sale recently it really caught my attention. OK, I’ve spoken about how cheap Model T clown cars were to build. Now I’m going to fill you in on one that I saw for sale for $32,500 — but, it’s a pretty special one. I’ll let the ad I saw tell the story for you.

Offered here for your consideration is a 1908 Model T. This Model T was owned by the current owner’s grandfather, William Ollie Hutton. It was created for Walt Disney to be displayed and run in the Main Street Parade in the early 1960’s at Disneyland which had just opened to the public a few years earlier. The vehicle was known to the public as the “Dizzy Lizzy” because it was modified to do wheelies (putting the front end in the air) while doing 360’s while in the air. The vehicle was designed by Bob Gurr, a Senior Mechanical Design Engineer in the early days of Disney in the 1960’s.

To see just how nice it is, check out the video below:

History behind the Dizzy Lizzy

William Ollie Hutton (Grandfather to the owner), was born in 1893 in St Clair, Missouri. He and his family moved to Glendale, California in the early 1920’s. He then became a Motorcycle Deputy for Los Angeles County for a couple of years. The motor unit for L.A. County was disbanded so he transferred to the Glendale Police Department who still was using Motorcycle Cops. He was one of 9 Motor Cops in 1928. During this time Walt Disney who was from Marceline, Missouri (154 miles away from St. Clair) moved to California (Burbank area) in 1923.

After a few years working as a Motor Cop for Glendale P.D., Ollie Hutton was involved in an on duty accident and was medically retired due to his injuries. Somehow, somewhere Ollie Hutton and Walt Disney connected with each other (unknown if they knew each other in Missouri) and it was during the late 1950’s – early 1960’s that Ollie Hutton had modified his 1908 Ford Model T to become the Dizzy Lizzy.

To see Dizzy Lizzy in 8mm action from back in the day, check out this next video:

Since Ollie Hutton was the only one who knew how to drive this vehicle, Walt Disney created a custom costume of the Disney character “Goofy” that he wore while driving in the later mentioned events. (The vehicle is controlled by a set of levers coming up through the floor board directly in front of the driver’s seat). His costume was of Goofy during the 1920’s era when men wore a driving overcoat and hat (no goggles) in open aired vehicles.

What we do know is that during the early 1960’s this vehicle was driven in the daily Main Street Parade at Disneyland, was featured in the early 1960’s annual Hollywood Santa Claus Lane Parade, was guest star’s “Pa Oats” vehicle in the 1969 – 1979 T.V. series Hee Haw starring Buck Owens and Roy Clark, and was featured on ESPN Classic NFL Films with Steve Sabol during the 1964 season when the Baltimore Colts were playing the Los Angeles Rams at the L.A. Coliseum … the video above shows Ollie Hutton in the Disney Goofy costume driving Dizzy Lizzy with Coach Don Shula sitting in the front passenger side with quarterback Johnny Unitas in uniform with another unidentified player #10 sitting in the back seat.

The vehicle was restored to its current condition by a collector in Coeur d’Alene, Idaho and was driven in parades.

To see how incredibly agile Dizzy Lizzy is on the street, check out the video below:

Pretty cool, huh? I’m kind of surprised that I haven’t seen where anyone has built a modern day version using T-Bucket know-how and components. About the closest I could find was this wildly decorated T-Bucket. But it’s more a visual overload than a wheelie machine. In my research, I also came up with a rather unique vintage Model T modification. I’m sure this one made a parade or two in its day, but although it has probably the shortest T wheelbase I’ve seen I kind of doubt it had much wheelie capability given almost no weight is behind the rear axle.

Thanks for indulging me in this reminiscence that played a part in my T-Bucket fascination. At least I hope you found it mildly amusing.