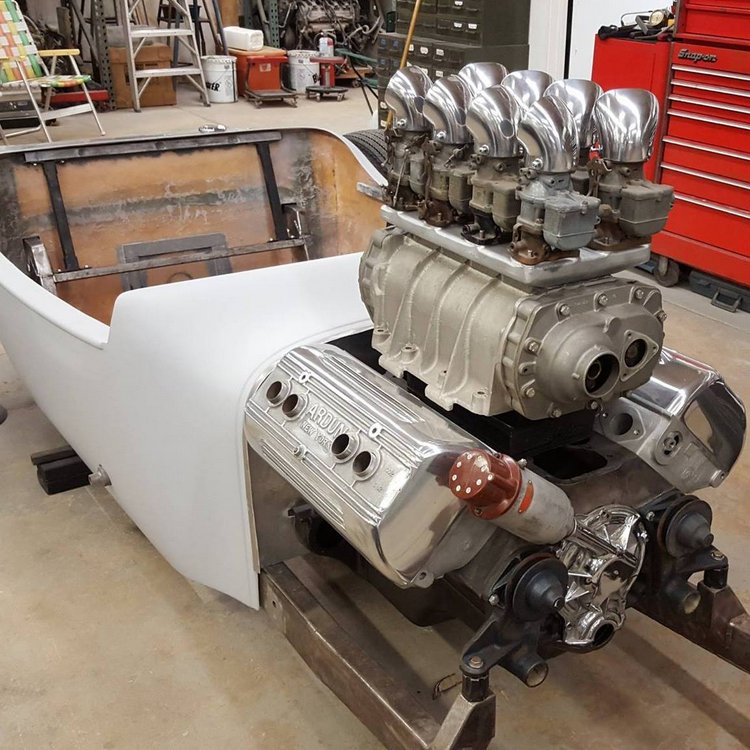 As promised, we’ve hurried to do our third update on the Fox Valley Hot Rods low profile T-Bucket in order to keep up with the regular progress being made. You’ll see some great tips for reinforcing fiberglass body in this installment, along with a few other new developments. Follow along as things have moved beyond the initial mockup stage and are starting to come together. And, if you haven’t already done so, be sure to check out our first and second updates before jumping into this one. Since our last installment, one of the first orders of business was to fabricate the transmission crossmember. With the suspension components removed, this is an opportunity to see the extreme rear kickup and how the frame has been fabricated to also subtly kick up in front for a low profile while the side rails taper tastefully from the firewall forward to the front crossmember so that the finished look will be just right. No quick and dirty fabrication on this build. Looking head-on, you can see the subtle chassis taper.

You’ll also get to see how the innovative dual Jerrycan fuel tank is coming together and we think you’ll like the innovative styling treatment that takes the place of a plain old rear kickup hanging out there. With the T’s extreme low profile, the driveshaft is a passenger compartment consideration and one of the Fox Valley Hot Rods tricks for figuring out the driveshaft tunnel configuration is to mock the driveline up with a readily available cardboard mailing tube. Here you see the driveshaft tunnel as well as the FoMoCo C-4 automatic transmission adapted to the flathead engine block that will be topped off with Ardun heads, GMC supercharger and a whole flock of Stromberg 97s.

Reinforcing fiberglass body panels, especially on a T-Bucket, can take many configurations. Glassing in wood strips is one possibility while others include adding more fiberglass layers or fabricating ‘glass reinforcements or even using electrical conduit steel tubing. What you’ll note here is the one inch square tubing that Fox Valley fabricated for their body reinforcement. Above, you’ll see the steel tubing reinforcement bolted to the chassis. You’ll also note the fabricated brake pedal in the above photo. The square tubing reinforcement bolts to the frame for convenience in body removal at a later date and is not bonded to the body. Rather, it was fabricated to follow the body curve and be positioned immediately under the upper body lip. The curvature of the tubing is evident in the above view, which also shows the plywood seat back panel — under which lies more steel tubing reinforcement. Reinforcing fiberglass body rear panel is achieved here by attaching the one inch tubing to the rear kickup crossmember. The crossmember has vertical supports that also serve as safety containment for the driveshaft. Speaking of which, you’ll note that the body has had further steel reinforcing plates glassed in around the driveshaft tunnel. In our last installment, the Jerrycans fuel tank was resting on a piece of steel plate that was in turn resting on the rear kick rails. In order to have a more finished appearance and provide a means for installing rear tail lights that didn’t look like an afterthought, the crew at Fox Valley Hot Rods took a very novel approach. A nicely curved rear deck was fabricated, which also blends well with the Jerrycan lines. To that were added some rare lights that Matt Werksman found as military surplus years ago and had been waiting for an opportunity to use. Fox Valley fabricated metal buckets to French in the lights. The completed rear deck with its Frenched tail lights presents a very pleasing appearance. It also provides nice visibility to the chromed quickchange rear end that will be found under this sharp low profile T-Bucket roadster. While moving at a rapid pace, given the priority of normal customer business the Fox Valley crew was able to showcase some of the early work on the roadster at their annual holiday party. We know you’ll want to follow along with the build progress on this really innovative, yet traditional, T-Bucket. Be sure you don’t miss the next installment by Subscribing to TBucketPlans.com RSS Feed