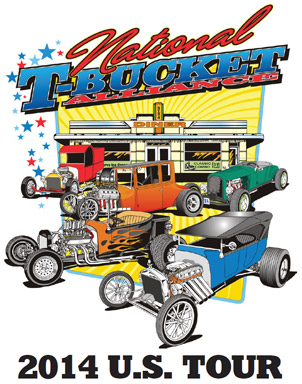 The T-Bucket Nationals 2014 in scenic Mountain Home, Arkansas just wrapped up this evening with a terrific car show on the grounds of Arkansas State University Mountain Home. But with over 130 T-Buckets in attendance you can’t argue with what a feast for the eyes that was. Mountain Home has become very T-Bucket friendly, given the events held there, and when you learn that in a town of about 15,000 population that 3 of the local law enforcement officers are also T-Bucket owners it gives you a warm feeling.

Of course, it doesn’t hurt that T-Bucket builder Spirit Cars had its roots in Mountain Home and today is just down the road in larger facilities in Flippin, Arkansas.

And it’s very refreshing when the Managing Editor of the local paper chronicles his ride in a T-Bucket with a story titled, “I’m Officially a Buckethead”.

Of course, the beautiful Ozarks setting of Mountain Home made for perfect cruises during the T-Bucket Nationals 2014 and they were well attended. In addition, over 60 T-Buckets participated in the Friday night Red, White and Blue parade in downtown Mountain Home.

I’m hurrying to get this post done, so I’ll be short on words and long on photographs. Just remember, when you want even more T-Bucket Nationals 2014 photo fixes, you’ll find more than 600 photos in the albums on our TBucketPlans.com Facebook Page.

Over the next week or so, though, I will be posting some feature stories on some of the more interesting T-Buckets at the T-Bucket Nationals 2014.