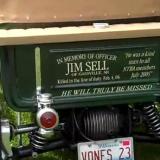 Vonei White’s blown emerald green T-Bucket, features a memorial inscription to Officer Jim Sell of Gassville, AR, who lost his life in the line of duty. Officer Sell had become a friend of T-Bucket owners and families as a result of his involvement ensuring safety for the National T-Bucket Alliance’s T-Bucket Nationals in Mountain Home, AR.

This video is from the Crazy T’s of Northern Illinois July, 2009 outing and shows the striking Corvette independent rear suspension and tasteful chrome accents on a Total Performance based T-Bucket powered by a supercharged Chevy smallblock that sees frequent use. It also features a beautiful tan top and tan upholstery to complement the emerald green finish.