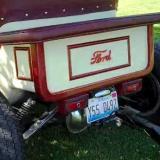 Yes, it’s another T-Bucket from the Crazy T’s of Northern Illinois 2009 outing at the Volo Auto Museum. This is Ross Patterson’s small block Chevy powered, scalloped T-Bucket roadster with a matching trailer. Sure, it’s a little rough around the edges but that’s because its driven. For some reason, I am a big fan of T-Bucket front suspensions where the tie rod is positioned behind the axle and runs between the radius rods. That’s why I fixated on that detail in this video.

I don’t know about you, but if I look long enough I can find any number of details on a T-Bucket that are fascinating. Quite contrary to others’ opinions that they are look-alike kit cars, in reality no two T-Buckets are ever really the same.