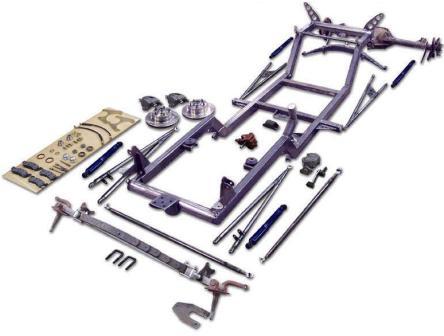 As noted in Part 1 about NEHR Speedcraft’s “Hot Rod in a Box” T-Bucket kit, it is designed to be a well-engineered package that offers ease of assembly for the home garage builder without any welding or drilling and which includes all the necessary fasteners to successfully put it together. In addition, for a very modest additional charge you can receive your kit pre-assembled, which includes suspension alignment, the floor is fitted, rear brakes assembled, grille shell mounted, steering shaft and transmission tunnel fitted. One of the elements that especially impressed me about the “Hot Rod in a Box” is that NEHR has brought OEM fastener design technology to the T-Bucket world. And, it goes beyond instructing the builder to use Loctite on threaded fasteners, which they do. All joints are to be treated to anti-seize compound so that when the owner wants to disassemble something 10 years from now he can do so without resorting to the time-honored “blue tip wrench”. They also take into account small items you might not normally think about, such as the fact that over time water gets into rod ends and they rust together. All of this is explained by Dave Nedock, “At Ford, I was an engineer but I also had to be a good mechanic when it came to engineering for production and ensuring reliability on the road. The fact that I was also racing alcohol funny cars kind of made me the hot rod go-to guy in the area”. Dave had a lot of brake experience during his engineering days at Ford Motor Company and notes that the braking system on the Hot Rod in a Box is designed to work as you would expect it to. With front discs and rear drum brakes, they do an exceptional job stopping this quick little under 1800 pound roadster. Another interesting option they offer is to completely fit and install all of the brake and fuel lines, hoses and fittings. Going back to engineering basics again, all of the brake and fuel lines are isolated with special clamps above the chassis surface to prevent the inevitable high frequency vibration known as fretting that will cause eventual wear and possible future failure of those critical systems. Given that T-Buckets have a notorious reputation for requiring a contortionist to get in and out and can sometimes be only driven for a half hour at a time before having to get out and stretch, it’s interesting to note that Tom and Dave have made every effort to make the Hot Rod in a Box as ergonomically friendly as the Taurus your wife may drive. For example, the steering wheel angle and pedal positions are consistent with those in passenger cars. Owners of the NEHR T-Buckets report they require no period of adjustment and that you just get in and drive like you would in your everyday car. One drove from Utah to Phoenix and found it more comfortable than his classic Mustang. Paying careful attention to things like the seat angle make this possible. At first, I wasn’t totally sold on the Lakes style headers NEHR provides with their kits, but once the integral mufflers are painted to match you end up with a traditionally pleasant looking hot rod header that someone may have fabricated back in the 50s. From a reliability standpoint, you’ll also be glad to know that NEHR uses only new, OEM steering boxes that they have chosen to perform and last in this particular application. The boxes utilize an innovatively distinctive mount and NEHR fabricates their own track roadster look pitman arm as a key element in the steering system. So, if you choose the NEHR pre-assembled option and their tire option, all you need do to take inexpensive delivery of your T-Bucket kit is to arrive at the NEHR shop and then rent an inexpensive trailer dolly down the street and you’re on your way home to do you own final assembly and finishing touches. It’s interesting to note that the NEHR bodies are not wooded, which gives more interior room in addition to their unique “speed blister” which offers the comfortable foot room that’s been lacking in most automatic tranny buckets. Their floor material is rugged 5/8 inch marine plywood for stiffness and durability. In terms of Dave Nedock’s engineering contributions to these T-Bucket kits, he summed it up nicely that “You don’t know what you don’t know”. And I would agree that while most T-Bucket builders are competent backyard mechanics it’s all too often that critical elements like pinion and thrust angles, slip displacement and ride inclination can be overlooked in ones enthusiasm to “git er done”. It’s comforting to know that my reference in Part 1 to what might happen when your T-Bucket hits a 6 inch deep pothole at 70 mph is actually something that Dave and the NEHR team have taken into consideration in designing their Hot Rod in a Box, because that’s a durability test that Ford Motor Company requires. The photo above gives a nice peek at NEHR’s cut-down, 3-piece-look windshield that helps maintain the low profile of these roadsters. And if you’re curious about that little T-bar mounted on the dash, it and a similar one mounted vertically on the driver’s side are convenient grab handles for easy entry and exit from the bucket without having to grab the windshield or the side of the body. NEHR’s innovative “speed blister” eliminates a chronic problem inherent in low-slung T-Buckets with automatic transmissions: no foot room! In essence, the relief adds a much-needed 4 1/2 inches of width to the firewall for comfortable foot separation. The brake pedal is designed for the correct 7:1 ratio so that brake pedal feel is like that in a passenger car — and it works. While many customers choose to use an automatic transmission, NEHR hasn’t forgotten the guys that like to row their own. They offer a 5-speed manual transmission option which is actuated with the assistance of their own design mechanical clutch linkage and pedal assembly that works smoothly and is designed just like in a passenger car with proper step-over and separation so you won’t hit the wrong pedal by accident. A particularly cool (no pun intended) aspect of the manual transmission option is that the tranny is fully exposed up to the driveshaft area because it doesn’t generate heat like the less-efficient automatic. In keeping with the traditional hot rod theme, you’ll be interested to see NEHR’s “high tech” fuel gauge mounted on the back of the body.

If it sounds like I’m enthusiastic about the NEHR Hot Rod in a Box T-Bucket kits, I am. In fact, if I weren’t well underway with my own ground-up T-Bucket project, I’d be knocking on their door right away. And, if you’re looking for something a bit different from a ’23 T with a bit more room you’ll be glad to know that NEHR is now also offering a 1927 T “Hot Rod in a Box”. News Flash: If you can’t wait to get up close and personal with this exciting T-Bucket, NEHR Speedcraft will be exhibiting a completed Hot Rod in a Box, with special show pricing, at the 2011 Detroit Autorama at Cobo Hall, February 25-27, in the booth of speed equipment manufacturers’ reps, Kunzman & Associates. 2/27/11 Update: You can see the NEHR T-Bucket kit at the 2011 Autorama here>