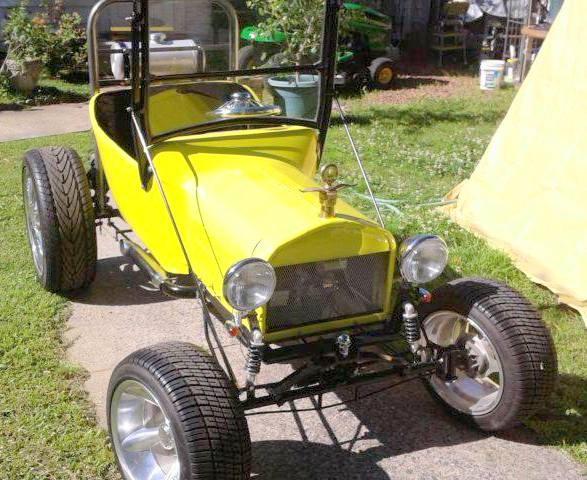 For his Mini T Bucket build, Larry Matlock of Durham, NC came at it with many years of experience. As a long-time car guy, Larry’s interests and collection spans the range from the oldest of antiques to Chevelles, Mustangs, Corvettes, motorcycles and everything in between. In fact, Larry’s Mini T Bucket build got its start four years ago when he visited here and downloaded a set of the Youngster Free T-Bucket Frame Plans. Larry even got started building a full-size T-Bucket, but his interests got diverted when he learned about the half-scale Mini T Bucket bodies produced by Spirit Industries. He’d already been exposed to T-Bucket frame building and had our plans and years of experience so he ordered the body and pickup bed from Spirit and began his Mini T Bucket build. So, instead of using 1-1/2″ x 3″ tubing as would be used for a full-size T-Bucket, Larry chose 1″ x 2″ tubing and just scaled the Youngster T-Bucket Frame Plans down to size. For his front crossmember he used some 1-3/4″ round tubing and a piece of angle iron for the spring perch. For the front transverse spring he used a lightweight trailer spring and his front shocks came from a BMX type bicycle. The front axle, spindles and hubs were scrounged from a vintage EZGO golf cart and mount some cool looking 12″ wheels. For steering, Larry happened to use a rack and pinion unit originally designed for a fuel dragster. For the rear end, Larry chose one that was originally used on a motorcycle trike along with its drum brakes and added 18″ aftermarket wheels. For both front and rear radius rods, he used 1/2″ tubing with heim joints. The body, as noted, came from Spirit, along with the pickup bed. The floor is diamond plate, upon which is mounted a Volkswagen emergency brake, and the interior, of course, was treated to rolls and pleats upholstery. The windshield, by the way, is an original Model T windshield cut down to fit the half-scale body. Larry’s Mini T Bucket also contains many small parts purchased from Speedway Motors as well.

And the radiator shell is an actual steel ’23 T cut down to fit, sporting a vintage Model T motometer and flanked by Harley Davidson Sportster headlights. Larry fashioned his own steel hood and what lies underneath really makes Larry’s Mini T Bucket build unique.

A Briggs & Stratton lawn mower engine just wouldn’t do for Larry and, drawing on his motorcycle experience, he chose a Harley Davidson 883 cc engine for power. The chrome exhaust you see is functional and when this Mini T Bucket motors down the road the sound is really sweet! Speaking of motoring down the road, Larry’s Mini T Bucket build is completely street legal. When he took it to the DMV the inspector remarked there would be no way they’d pass Larry’s Mini T. Then Larry reminded the inspector that’s the same thing he said when he’d brought in his 1901 Oldsmobile to be registered!

By the way, if you look closely at the pickup bed cover you’ll see the neat little solar panel that’s used instead of an alternator. So this Mini T Bucket is the total package and Larry’s been offered $12K for it and turned it down. Just too much fun and a nice diversion from his dozen other antique cars. Like we said, Larry Matlock is a very experienced car builder and this excellent Mini T Bucket build reflects his skills. By the way, if you haven’t already, now’s the time to enter our Mini T-Bucket Body Package Giveaway. To enter, click here>