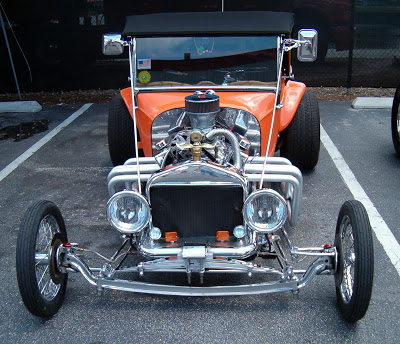 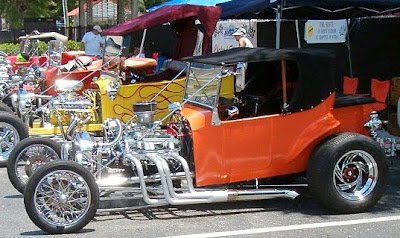 This past weekend, I happened to be in the Sunshine State and decided to drop by the Sun T’s of Central Florida show and cruise at Old Town in Kissimmee. Quite a nice turnout of very nice T-Buckets and a very friendly, infomative bunch of T-Bucket lovers. They had a lot of cool buckets on display and over the next few days I’ll highlight some of my favorites. I must say that moments after walking up on the row of T-Buckets shining under the sizzling Florida sun that one of them really caught my eye because I’m a sucker for short wheelbase cars. This orange beauty not only had that stubby wheelbase look, but it also had a short roofline that made one wonder, “How does the owner get in there?” And as I got closer I was surprised to see this T-Bucket sporting not only a single round tube frame, but it was also chrome plated! Well, I met the owner, Albert Almeida of Ridge Manor, Florida, and not only is his little bucket stunning to look at but it has a fascinating story. 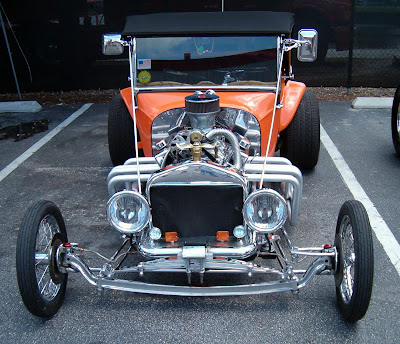 According to Albert, the car was built in the 70s as strictly a show car (more about that later). And, it was sporting the requisite hardware for a calculated-to-win 70s T-Bucket show car: a chromed Jaguar independent rear end. Albert bought this bucket in the 80s and was probably the first person to ever drive this car that had spent its life on the show circuit. Was he in for some surprises! 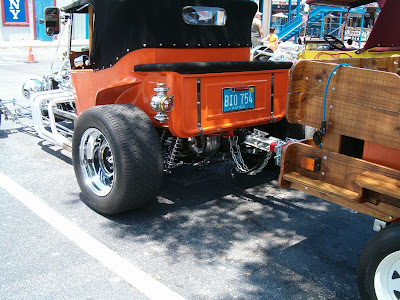 At the time, the T had a tall windshield and the body was unreinforced. After going over a hefty bump, the resultant flexing and distortion shattered the windshield, which in turn ended up in Albert’s lap. After pulling into a location where he could assess the damage, somebody informed him that he had something leaking from those shiny round chrome frame rails. The brake lines had been routed inside the frame and they fractured under the impact of the bump, draining brake fluid on the ground. A little investigation by Albert discovered that the show car builder’s motto must have been outta’ sight, outta’ mind. You see, the chrome frame isn’t all round tube. It was welded behind the firewall to a more conventional unpainted rectangular steel frame. And, the wiring panel was under a tall seat, that made the driver sit almost outside the body of the car. What was worse, though, was the wiring was all point-to-point, unfused! Those cute little fenders were just “jammed” into the body and where hidden by the tall seat were a jagged mess. Albert decided to turn this “look, but don’t touch” beauty into a driver. 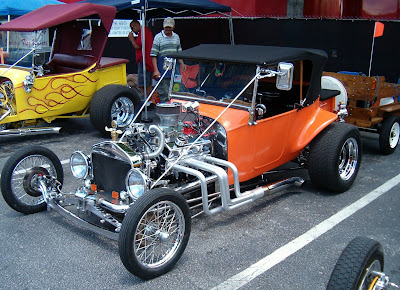 After the broken windshield incident, Albert decided to chop the windshield frame and mate it to an equally chopped cloth top, that today sports incredibly water repellent Mercedes top cloth. He ditched the tall seat and reinforced the formerly flimsy body. The dangerous wiring was moved from under the seat to behind the dash. Albert isn’t a tall guy, so he can climb into the new lower seat in a semi-reclining position and see out the windshield without hunching over and says he can drive for about an hour before having to stretch his legs. As you’ll note from the trailer attached, he now drives his T-Bucket all over and reports that running without front shocks has not been a problem. I really dig this car because of its unique look and the fact that Albert has further personalized it and made it even better to look at, to say nothing of the fun he has driving it.

1 thought on “Is There Life for a T-Bucket After the Show Car Circuit? Ask Albert Almeida.”