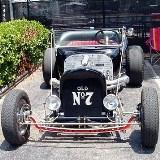 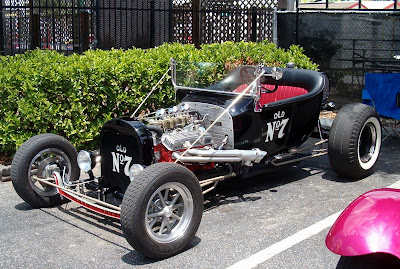 From last weekend’s Florida Sun T’s T-Bucket event, I’m happy to highlight another T-Bucket that really caught my attention. Not only am I a short wheelbase fan, but I’m also fond of the “bobtail” T look, with neither turtle deck nor pickup bed. At first, when I saw this black bucket with the familiar “Old No. 7” logo on the grill I thought it was cute and nicely done. But, as I got closer I was totally blown away by the level of unique detail which had been lavished on this hot rod. From the Super Bell dropped I-beam front axle to the milled aluminum firewall and onto the milled inserts on the ends of the fuel tank which further sported a Frenched license plate enclosure. 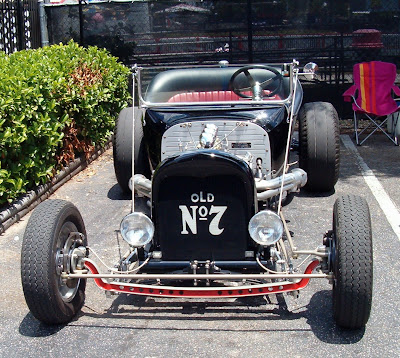 Greg does “know Jack” about T-Buckets

Then when I saw a guy walking around with a black “You Don’t Know Jack” T-shirt, I put two and two together and astutely guessed he must be Old No. 7’s owner. Turns out Greg Bear had taken the hour and a half plus cruise over to Kissimmee from Inverness to have a chance to congregate with some other T-Bucket owners. Greg’s a fascinating guy. Seems like he’s been into riding and building motorcycles most of his life and finally got tired of being dissed by his brother who wrote him off as a biker who didn’t really know much about cars. Greg took that as a challenge and immersed himself in hot rod research and determined he would build a track roadster because of it’s similarity to a hot bike: fewest parts, lightest weight and most power possible for maximum fun.

With an engineering background, Greg spent untold hours 3D modeling the chassis and other details for his build. And it was time well spent. Case in point: this T-Bucket weighs all of 1100 pounds! How so, you say? Well, thanks to his engineering skills Greg determined that he could use 1 1/2″ x 3″ tubing for the frame rails — but, by modeling it in advance, determined he could get away with 14 gauge! Of course, it helps that the rear crossmember is round, rather than rectangular, tubing for more rigidity and the frame sports other lightweight crossmembers that further strengthen it. As for the chassis details, my photos don’t do them justics. But, take my word for it that Greg’s approach is totally unique. Instead of mounting a radius rod to a “tab” dropping down from the frame, Greg has incorporated sweeping tapered and drilled brackets that also serve to increase the lightweight frame’s rigidity — besides looking cool as all getout. 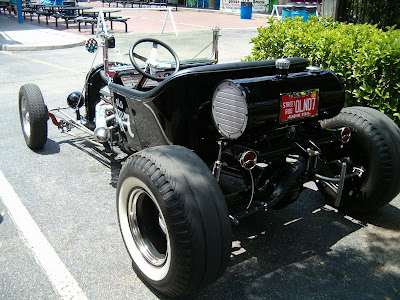 Who would have known that the stylish fuel tank once served duty as an ancient hot water tank and as long as he was reworking it Greg decided to sink the mounting for his personalized “OlNo7” license plate into the tank. What’s amazing, though, is Greg’s total thought process in designing and building this bucket: If it’s not absolutely required and if it adds weight or complexity — forget about it. That’s the same attitude the track roadster builders adopted three quarters of a century ago. 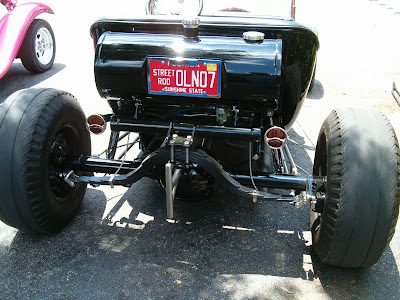 Greg has become a real student of T-Bucket history and has absolute respect and awe for the abilities of 60s and 70s T-Bucket builders like Dan Woods. Now, Greg has another innovative and ambitious bucket-related project in the works and, trust me, it will be worth the wait and possibly even more stunning. “After all,” Greg says, “a T-Bucket is just like a 4-wheel motorcycle.” Stay tuned.