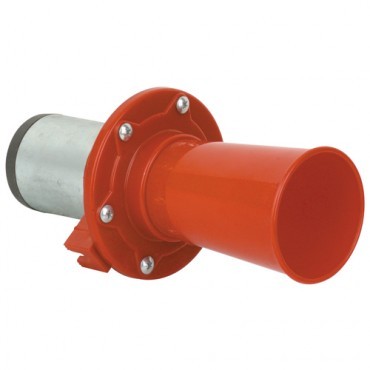 There’s no denying it. If you’re building a T-Bucket hot rod you gotta’ have a horn. It’s a legal requirement almost everywhere and, besides, you need it to wake up those looky-loos who are dangerously wandering into your lane just so they can get a closer view of the results of your mechanical genius.

More properly, it’s known as a Klaxon horn. The Klaxon horn mechanism was patented in 1908 by Miller Reese Hutchison, who would later become Thomas Edison’s chief engineer. The name Klaxon comes from the Ancient Greek verb klazō, “to shriek” — and shriek, it does. The earliest Klaxon car horns were purely mechanical devices that were driven by hand (see plunger above). Later versions were driven by an electric motor as in the above diagram and the squawking Klaxon sound is produced by a spring-steel diaphragm with a rivet in the center that is repeatedly struck by the teeth of a rotating cogwheel. The diaphragm is attached to a horn that acts as an acoustic transformer and controls the direction of the sound.

Now, here’s where it gets interesting. Model T Fords were never factory equipped with Klaxon horns. However, the horn Ford did use was a dud and the Model T was known as the most accessorized car ever produced. Therefore, people have come to expect all model T’s to emit the distinctive aahooga Klaxon sound. In fact, the company that made the Klaxon horns was purchased in 1924 by the Remy Electric division of General Motors. So, what most people think of as a Ford horn was actually made by G.M. And that’s our history lesson for today.

Which leads us to modern times and building a T-Bucket hot rod on a budget. Well, back in 2001 I purchased a Klaxon-type horn from Harbor Freight for $29.99, which at the time was a good deal being $5-10 less than most other sources. Now, don’t use this as an excuse to lambaste Harbor Freight for selling products made using low-cost labor in China. After all, by 2001 there probably hadn’t been a single sole employed in the U.S. in the previous couple decades making Klaxon type horns.


Low and behold, I now see that Harbor Freight is selling these horns for $10.99! Where else, other than in high tech electronics, do you see the price of something come down over two-thirds in a little over ten years? So, it just goes to show you that you really still can build a T-Bucket hot rod on a budget. Hey, if you know of any other examples of components that have gotten cheaper let me know and we’ll spread the word.