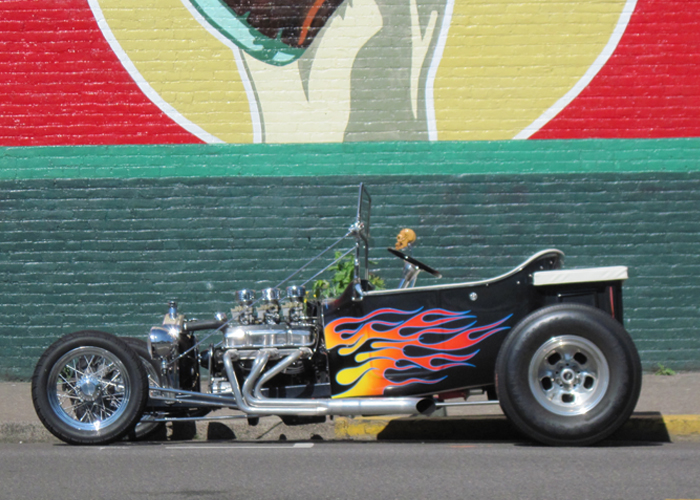 This site is based on a lifelong love of T-Bucket hot rods. Therefore, it’s gratifying to be able to share Bob Borum‘s 48 year love affair with T-Buckets in this Let’s See Your T! installment. But, Bob’s story is bittersweet. Read on.

“I grew up in the South in an era when cars were as important to a guy as the air he breathed. As most boys of that era, I developed an interest in automobiles at a very early age and literally dreamed of the day I would have my very own car. I can remember reading the car mags and sitting on the curb outside my dad’s movie theater in a small West Texas town (Earth, Texas to be exact) just waiting for that cool California ride to come rolling through. It never came, but the first chance I got I headed for California. While visiting a friend in Reedley in the summer of 1965 I got to sit in one of his friend’s older brother’s hot rod — a T-Bucket — and I was hooked.”

“When I got older and started building cars the first Hot Rod I built was a T-Bucket. That was in the late 70s in Northern California. The frame was built by John Romero at Able’s Special T’s and everything else was swapped, traded or bartered for.” “To this day it has to be my favorite and definitely my most fun car.” “I drove that car everywhere and in the summer of 1982 my 10 year old son and I drove it cross country from California to Texas and back just for the fun of it. As a matter of fact it was on that trip in the bucket that he learned to drive.”

“Many hot rods, street rods and customs later … and after a 10-year break from cars commonly known as a mid-life crisis (as a rock and roll roadie) … I got back into hot rodding and the only car I wanted was a T-Bucket. I tried to find my original bucket … but lost the trail about 15 years ago in San Jose.” “So I did the next best thing … I found a solid Total Performance T-bucket with a blown (trashed, not supercharged) engine and the fun began again. The car was torn apart given a fresh engine and transmission, rewired and everything either refurbished or replaced.” “I realized when I started on the rebuild that because of age and body fatigue (probably from my roadie work) that my days in the bucket were numbered but I was determined to enjoy every single day with it. I made it my driver. Whenever the weather permitted I drove it everywhere … grocery shopping … trips to Costco … shopping …” Here are the specs on Bob’s current T-Bucket Transmission: Turbo 350 transmission also with less than 8000 miles. Doesn’t have shift kit but shifting has been beefed up. According to Bob, “Everything is either chromed, polished or painted … and yes, everything works. It is a proven ride that I wouldn’t hesitate to hop in and drive anywhere … and it has been maintained by an obsessive perfectionist. I believe it is one of the nicest driven T-Buckets you’ll find.” More pics on Photobucket.

“Unfortunately with this thing called ‘age’ comes some nasty things like a bad back and hip problems which have taken the fun out of driving it. For obvious reasons I have decided that it’s time to let someone else enjoy the ride. So now I’m looking to replace it with something that is equally as much fun, but less painful, for this old dude to get in and out of, possibly a early 60’s Impala … or a mid-fifties Fairlane or Ranchero … or maybe an early fifties Belair … or ????? Whatever I consider for trade has to be safe, roadworthy and capable of being driven daily. Obviously I like vehicles from the early 50’s thru the mid 60’s … but older could work. I’m not really interested in anything newer than mid-1960s and I have no interest in another project. I realize that money is tight for everyone, buyers and sellers alike, so my thought was that trading might be the best option. However, I’m certainly more than willing to sell the car … for the right price. I’m asking $19,500 … but would prefer to trade.” If you’re interested, you can email bob at bobborum dot com with questions, pictures of something you would like to trade or if you have an interest in buying it. Or call him at 541-9 five 3-1600 with any questions.

According to Bob, he still loves T-Buckets and hates to see his go but I can sympathize that with age sometimes we have to deal with changes we really don’t want to make.