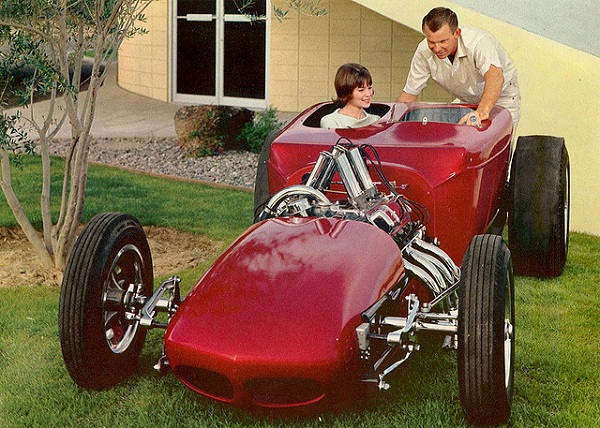 I just returned from watching the MAVTV 500 (yeah, I never heard of MAVTV, either) Indy Car race at Auto Club Speedway in Fontana, CA and it was one of the most fun and exciting races of any kind that I’ve seen in quite a few years. Some of the drivers weren’t crazy about it, but the crowd loved it, what little crowd there was. I’m guessing the stands were filled to only 40% of capacity, and I’m being generous in my guesstimate.

Anyway, I lost interest in NASCAR after seeing one too many 5-laps-to-go caution flags for “ghost” debris. Just didn’t like being played so obviously. Since I’m a huge T-Bucket fan, open-wheel racing is a natural. So, now I watch Formula 1 (yeah, I know it’s a mess, too, but it’s a new experience for me) and Indy Car. I now find Indy Car races to be very fulfilling experiences with lots of action and drama and almost a different winner for every race.

After seeing the meager crowd at Fontana this afternoon I felt an obligation to try to spread the word about Indy Car racing and that’s why I’m republishing this post from a couple years ago. Besides, I can look at the Chauvin Emmons T forever and never get tired of it. As for Indy Car, give it a try. I think you’ll like it.

The Indianapolis 500 is known as “The Greatest Spectacle in Racing” for good reason. But, I’m not talking about the pre-, during- and post-race revelry that occurs in the parking lots. And it’s not known as the Greatest Spectacle for what starts happening on the streets leading to the track at the crack of dawn or throughout the race in the infamous Turn 3 “Snake Pit”. As Jonathan Snowden recently noted, “The Indy 500 didn’t become the greatest spectacle in racing; it’s always been the greatest show on wheels” for 102 years! Quite simply, “The Brickyard” often showcases the leading edge of automotive performance technology. And that’s what brought me to Indianapolis this year — looking for some T-Bucket hot rod inspiration. Sitting above the entrance to pit road and with a great view of Turn 1 and the main straightaway, it was a heck of a race; with 64 lead changes, an astonishing number that doubled the record number of lead changes set in 2012! Fourteen drivers led at least one lap: the most ever. A new race record speed of 187.433 mph was established; four female drivers started the 500 and Brazilian Ana Beatriz posted the fourth-fastest lap of the race with a speed of 224.988 mph! And by now you’re thinking, “What’s the Indy 500 got to do with T-Buckets?” Read on. You see, at the 1963 Indianapolis 500 a young Phoenix area hot rodder named Chauvin Emmons worked on the crew of the Dean Van Lines Special and translated that speedway inspiration into the creation of one of the 1960s most distinctive T-Buckets, which earned multi-page coverage in the June, 1964 issue of HOT ROD Magazine. What was totally unique for any hot rod up until that time was the streamlined nosepiece, which Chauvin had modeled after the famous AJ Watson roadsters of the era. It so happens that 1963 was the year of the highest number of Watson Roadsters produced: 8, and most of them with their distinctive “shark nose” were entered in that year’s Indianapolis 500, including the Dean Van Lines car that Chauvin crewed as well as such notables as Watson’s own Leader Card team, John Zink, Sheraton-Thompson, and Agajanian. In addition, Chauvin built his own custom snub-nosed turtle deck which further enhanced the T’s racy looks and to “walk the walk” powered it with a fuel-injected Olds engine. And if that wasn’t enough, it was streetable, too.

Fortunately, the car still exists, although now with a big block Chevy. However, I understand the present owner is planning a restoration to its 1960s elegance with an Olds engine again. By the mid-1960s, the face of Indy race cars had changed from the traditional roadsters to the new, low-slung mid-engine racers like the AJ Watson creation driven by Donnie Allison to a fourth place finish in the 1970 Indianapolis 500. (That same day, Donnie hightailed it to Charlotte, NC and won the World 600, establishing an 1100 mile racing endurance record). Staying on top of Indy racing technology, Chauvin built his own mid-engine ’23 T, also featuring an updated Watson “shark nose” and with a 427 cubic inch Chevy engine on gasoline took it to Bonneville and turned 183 mph. Not bad for a street and show car. With that taste of successful salty speed, Chauvin decided to step up his game. Once again, he looked to the Indy 500 for inspiration. His quest for greater speed brought about a need for better aerodynamics and Chauvin looked to the Lotus 56 wedge design which had been employed on the Graham Hill, Joe Leonard, and Art Pollard turbine powered cars at the 1968 Indy 500. After all, Leonard had won the pole and was leading with just a handful of laps to go when a fuel pump shaft failed. For his 1970 Bonneville venture Chauvin teamed with another creative T-Bucket builder we’ve written about, Mark Niver, in the “Hays, Niver & Emmons” C-motored (360ci Chrysler HEMI) Modified Roadster (C/MR), which with some engine changes by 1972 put Chauvin in the 200 MPH Club with a B/BFMR record of 240.78. In 1974 Chauvin upped the record to 269.86 (with a top speed of 274.390 mph), which still stands. The car was sold and still campaigns today. Chauvin returned to the salt again in 2007 with another streamlined T, #428, but this time a rear-engined 370 cubic inch Chrysler. Then, in 2009 Chauvin suffered a garage accident from which he did not recover. Every now and again, a true adventurer comes along, and we lost one over the weekend.

Chauvin Emmons, a local racing icon, passed away as a result of complications from a broken femur. He suffered the injury during a fall while working in his garage in Prescott. He was 69.

It’s sadly ironic that a guy who once walked away – albeit with a broken back – from a crash at more than 300 mph on the Bonneville Salt Flats was felled by a busted leg.

“It was a very, very freak thing,” his wife, Sharon, said.

She found him on the floor of the garage last week after he slipped on a wet spot.

“He was lying there with his cigar clamped in his jaw as usual,” she said. “He said, ‘It hurts like you know what. I’ve broken my leg.'”

“When the paramedics got there, they wanted to make sure he hadn’t hit his head and one of them asked, ‘May I take that cigar out of your mouth?’ He had chewed it over pretty good.”

Over the weekend, complications set in and Emmons was taken off of life support on Saturday.

Emmons had been preparing for another run at Bonneville’s Speed Week that begins Saturday near Salt Lake City. His son, who is also named Chauvin, was on his way there Wednesday to make preparations to run the car his father and partners had built. Knowing that his father would have wanted him to do so, Chauvin McLaren “Mac” Emmons, took the #428 car to Bonneville the week after his father’s passing and the result was like something out of a movie.

Then, returning to the Salt Flats for Speed Week 2010:
[list style=”arrowblue”]

[/list]
Chauvin Mac would have made his father very proud.

Wow! We’ve gone from Indy to Bonneville and from oval track to salt flats racing, with some cool T-Bucket hot rod building in between. And I spent a great deal of time at this year’s Indianapolis 500 looking for some inspiration from the current cars that might be applicable to T-Buckets. Frankly, I’m stumped because the noses on the cars have become so small and pointed that I don’t see where any of the elements might fit a T today. But, anyway it was a totally enjoyable event and it was exciting to see incredibly popular Brazilian, Tony Kanaan, start from the 12th position and win the Indy 500 on his 12th attempt.